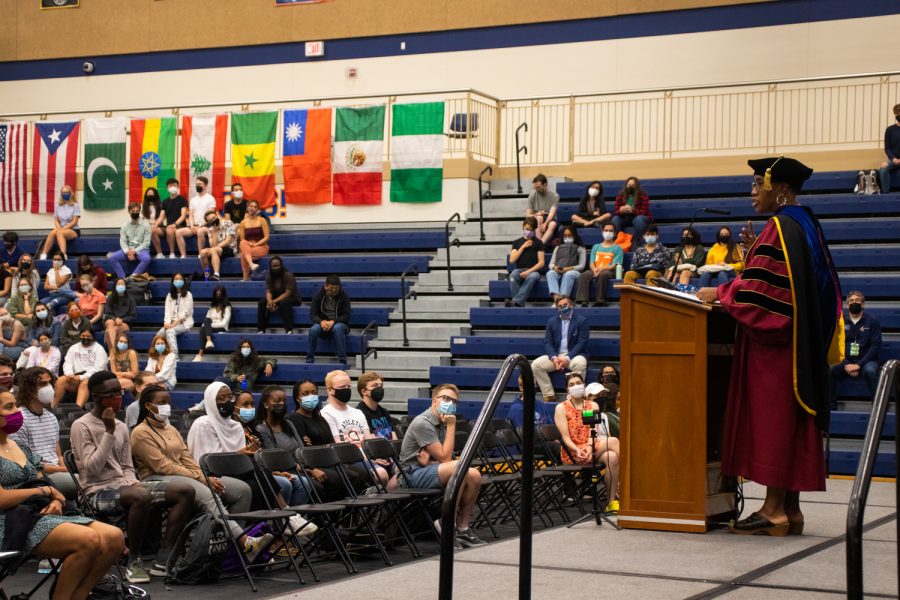 On Thursday, Sept. 2, members of the Macalester community gathered in the Alumni Gym of the Leonard Center, and on a Zoom livestream, for the yearly First Thursday convocation. First Thursday marks the start of the new academic year and was especially momentous this year, as the Macalester community is returning to campus in-person for the first time since the COVID-19 pandemic began.

“It’s always been such an important event to be part of, but I think this year was so different because no one’s seen each other for a year and a half,” Macalester College Student Government President Shreya Nagdev ’22 said.

Speakers at the event framed the new school year as a chance for the campus community to reconnect with one another after a long time apart. This message was especially important for the classes of 2024 and 2025, who were asked to stand and were welcomed with applause. There was also an overarching theme of moving forward while acknowledging both the injustices of the past and the uncertainty of the future.

The event began with a flag procession accompanied by bagpipes. College Chaplain Reverend Kelly J. Stone gave a land acknowledgement and the opening speech of the event, in which she remarked upon the last 18 months and the variety of emotions marking the start of this year.

“We are tethered to the hope of a future that remains yet unknown,” Stone said.

This year’s First Thursday keynote speaker was Dr. Lisa Anderson-Levy, Macalester’s new executive vice president and provost. Anderson-Levy reminded the Macalester community to re-evaluate the things that really matter in our lives and to acknowledge that the pre-pandemic times we consider to be “normal” were neither just — nor equitable — for everyone.

She described how to cultivate a caring community within Macalester, stating that in order to do so we all must be vulnerable, humble and invested in bettering ourselves and the world around us. She reminded every member of the Macalester community to be a source of inspiration and support for others but to, at the same time, allow themselves to be inspired and supported by others.

Anderson-Levy ended her speech with a reading of the Kwame Alexander poem “If The Trees Can Keep Dancing, So Can I.”

“It was actually [President Suzanne Rivera’s and Anderson-Levy’s] first in-person First Thursday, because Dr. Rivera wasn’t here the last time it was in person two years ago, and Provost Anderson-Levy wasn’t here,” Nagdev said in an interview. “So I think it was really significant for them to speak in front of the students and them being actually present and actually welcoming us physically.”

Rivera spoke next, building upon Stone’s remarks and adding the idea that the community ought not to take the word “together” for granted.

Saint Paul Mayor Melvin Carter was also a featured speaker at the event. Carter’s speech reminded the Macalester community of the systemic racism that has become a more prominent conversation in the Twin Cities in the last year, and also served as a call for a better and more equitable future.

“This is one of those moments where we get to decide just how much the arc of the universe will bend towards justice,” he said.

Nagdev spoke next, emphasizing the importance of Macalester students engaging in activism and raising awareness of pertinent issues. She also brought up the idea that in order for students to achieve concrete goals at Mac, there needs to be more avenues for open discourse and more people willing to aid in the achievement of said goals.

The event also featured a recorded Mac Of All Trades acapella performance and concluded with readings of the Peace Prayer by students in Burmese, Tigrinya, Spanish and English.