Macalester to divest from oil and gas assets 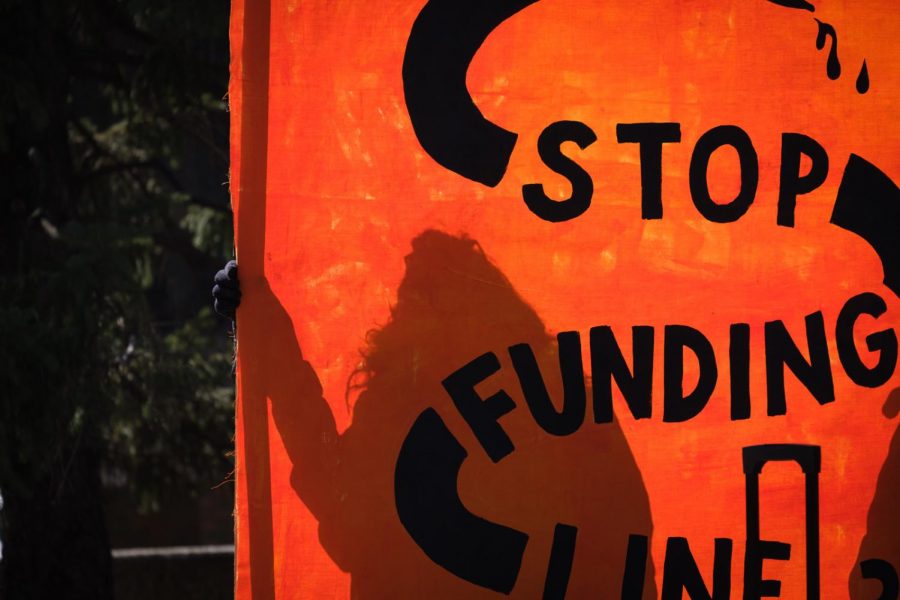 More than eight years after Macalester students first launched an organized fossil fuel divestment campaign, the Macalester Board of Trustees has decided to end all college investments in publicly traded oil and gas assets.

The board announced its decision to divest on Aug. 23 in response to the February 2021 student petition for divestment from Enbridge Energy, the company currently constructing the Line 3 tar sands oil pipeline across northern Minnesota. The board’s decision to divest from all publicly traded oil and gas funds and companies went beyond that ask.

In addition to asking for divestment from Enbridge, the student proposal asked the board to denounce the Line 3 pipeline project and commit to increasing transparency around investments.

While the board voted to divest, it declined to denounce Enbridge or the Line 3 project. They also tasked the board’s Governance Committee to identify ways in which the board can increase transparency with the campus community.

The board’s decision to divest took student petitioners by surprise. Fossil Free Mac (FFM), the student organization behind the proposal, petitioned the board for partial fossil fuel divestment in 2019; at that point, the board declined to do so. This time around, the students got more than they asked for.

“Initially it just kind of felt surreal, especially considering that Fossil Free Mac’s original ask when it was first forming was full divestment,” former FFM leader Sasha Lewis-Norelle ’21 said. “Seven years later we finally more or less achieved that, even when we hadn’t necessarily been asking for it.”

Despite the win for FFM on the divestment front, students had hoped for more urgency and transparency in the decision process.

This past spring, FFM asked the board to consider their 2021 proposal for divestment as soon as possible, since the Line 3 pipeline is due to be completed as early as October. On March 6, students blocked Grand Ave. as part of a national day of student action for divestment from Line 3. In April, FFM students organized a day of action which included a letter-writing campaign and bell ringing to ask the board to make a decision on the student proposal.

“The college failed to meet the urgency of the moment,” FFM wrote in its statement responding to the board’s divestment decision. “We called on Macalester to divest from Enbridge Energy in protest of the Line 3 pipeline in February during the early days of construction. Now, with the pipeline nearly built, the slow bureaucratic process has finally concluded.”

In May and June 2021, the board solicited feedback from the Macalester community. They received comments from students, alumni, faculty and staff, many of whom unequivocally supported divestment from Enbridge, denouncement of Enbridge and Line 3 and increased transparency.

The board did accelerate their timeline slightly. Then-Chair of the Macalester Board of Trustees Jerry Crawford ’71 predicted an October decision in April, and the board reached an agreement during its August meeting.

In a statement to The Mac Weekly, trustee and chair of the board’s investment committee Seth Levine ’94 and Macalester Board Chair Carrie Killoran ’94 wrote that many on the board had changed their thinking around fossil fuel investments since the previous FFM proposal in October 2019.

“We think it’s fair to say that the board’s thinking on this question has evolved some since 2019,” Levine and Killoran ’94 wrote. “The majority of the board felt that it was appropriate to use the question of divesting from Enbridge to clearly articulate a more extensive policy around fossil fuels investment.”

The decision marks the conclusion of the extensive student divestment movement. In 2015, the college’s Social Responsibility Committee (SRC) rejected FFM’s original divestment proposal, citing fears of financial consequences and doubt that divestment at Macalester would impact fossil fuel companies. The 2015 proposal never made it to the board or the president.

The next FFM proposal, which the board reviewed in 2019, asked for a ban on new investments in private oil and gas partnerships. The SRC approved the 2019 proposal and passed it to the board, but the board decided to accept it with modifications. They opted for a less restrictive policy, banning future private investments in fossil fuels unless the investments were “reasonably likely” to result in a net decrease in carbon emissions.

According to Chief Investment Officer Gary Martin, this means the college will not consider any investments solely in the oil and gas sectors.

“As a result of these two board decisions, the Investment Committee and Staff will no longer consider any funds or investment strategies (public or private) that are dedicated to, or invested solely, in oil and gas assets,” Martin wrote in an email to The Mac Weekly.

However, the school may still have investments in funds that put some — but not all — of their money into fossil fuels. Some of Macalester’s investments are in diversified portfolios and mutual funds that include a wide range of companies, potentially including fossil fuels.

“A diversified mutual fund that holds interests in oil and gas companies as part of its portfolio would not be subject to this policy, since it is not possible to separate out particular investments in such funds,” Martin wrote.

Diversified portfolios and mutual funds are usually overseen by outside asset managers, so the college does not have direct control — or knowledge — over exactly where the money is in those funds.

Despite some money still going to fossil fuels through those diversified portfolios, Levine and Killoran said that the board’s intention is to keep funds away from fossil fuel investments.

“​​It is not the intention of the board for this to be a ‘back-door’ way around the investment prohibition,” they wrote.

In the past, both the board and SRCs have expressed concern about losing money through divestment. Now, however, the college says it is not worried about this decision significantly impacting the endowment and the college’s financial future.

“It is the board’s belief that the college can continue to achieve its investment goals without the need to invest in the assets that this proclamation now prohibits,” Levine and Killoran wrote.

While FFM student organizers see the board’s decision on divestment as a win, they said that the board’s statement on increasing transparency was less satisfying. The board included a commitment to “foster transparent dialogue with the Mac community about the school’s investments,” but did not specify exactly what that might look like.

“The process itself was not made very clear to the students involved, and even the advocates that were involved,” Lewis-Norelle said. “It felt like there was a disconnect between the board of trustees… and the students and the community actually at Macalester.”

The board has yet to announce concrete steps to increase transparency. Martin directs people to the Investment Office’s website for more information which provides an FAQ page, links to Macalester’s investment policies and an overview of the endowment.

The board also declined to denounce Line 3 or Enbridge.

“The board felt that our decision to divest from Enbridge was clear and that no additional statement was necessary or appropriate,” Levine and Killoran wrote.

Student leaders of FFM were disappointed but not surprised that the board chose not to denounce Line 3. Lewis-Norelle had hope that the board would interpret this as an exceptional issue worth making a statement about, given the involvement of the Macalester community in the Stop Line 3 movement.

“I do think that Line 3 specifically is a bit unique, just given how much the community as a whole and the Macalester community has really engaged with this issue and how deeply engaged some people have been,” Lewis-Norelle said. “The amount that Macalester students and even faculty and alumni have engaged in this issue is  incredible. So it feels like Macalester does have a more unique connection to Line 3 than to a lot of other issues that are brought forward…  I think they still should have denounced it.”

This spring, as Macalester debated FFM’s divestment proposal, a number of students and alumni were arrested and are facing charges for taking direct action against Line 3 in northern Minnesota. An article from The Guardian published on Aug. 10 states that over 600 people have either been arrested or received citations for protesting Line 3 throughout the state. Since then at least 90 people have been arrested both in the Twin Cities and in Cloquet, Minn.

When the board announced its divestment decision, many of the students involved in FFM were helping plan a Stop Line 3 sit-in at the state capitol. Meanwhile, Enbridge estimates its pipeline may be in use by Sept. 15 and could be in full service by October.

Andrew Lee ’23 has been active in both the divestment movement at Macalester and the Stop Line 3 movement up north. He, too, thought the board’s denouncement could have been influential, especially to other colleges invested in fossil fuels.

“Especially given the image that we try to put forward in the Twin Cities of being a school that is socially minded,” Lee said. “I think being able to say, ‘We’re Macalester, these are our values and we denounce this pipeline,’ I think… it maybe could’ve pushed some other schools in the area to do the same.”

With divestment finally achieved, former FFM organizers are looking ahead to the ongoing fights — the Stop Line 3 movement, the broader environmental justice movements and the various other student movements, to name a few.

As a junior, Lee is one of the youngest students who worked closely with FFM in its final divestment push. Now, he’s thinking of where student movements could go from here.

“I think my biggest goal is to try and connect some of these movements that are happening,” Lee said. “[Environmental justice] is a really deeply interconnected social justice issue… so I think one of my goals is to make sure that it’s all a conversation and a fight that’s happening together; I don’t totally know how that happens.”

Lewis-Norelle hopes that FFM’s seven-plus years of work will help pave the way for future student movements and conversations with the school’s administration and board of trustees.

“I hope that… as this divestment campaign is kind of wrapped up and things are changing within the world of Line 3, that Macalester students continue to really show up for issues that are important both in the broader Minnesota sphere, but also to Macalester students,” Lewis-Norelle said.

“Hopefully this whole process will maybe make it a little bit easier for the next student movement, or the next people who want to try and talk to the board.”