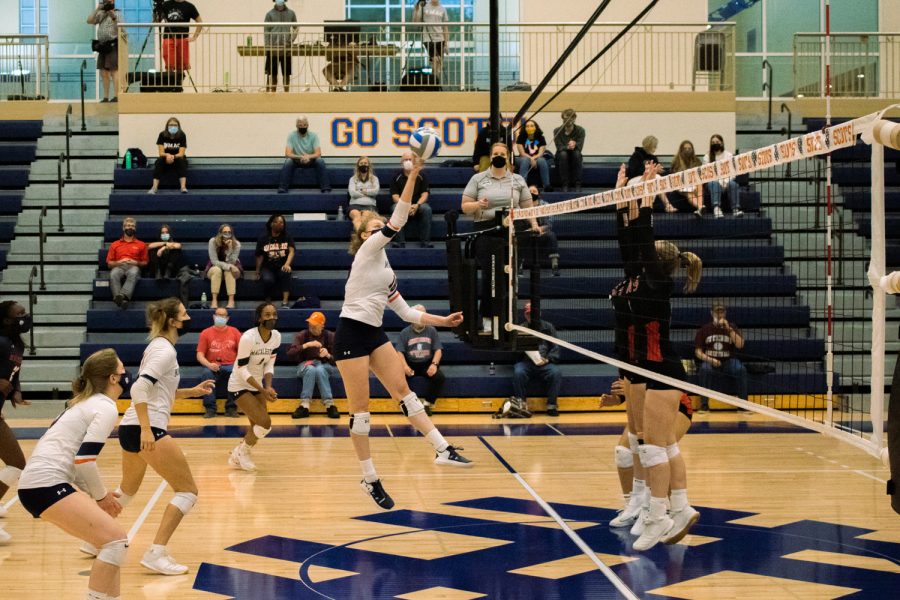 Mary Johnston is looking forward; she does not want to dwell on past controversies around Macalester’s women’s volleyball program. As the new women’s volleyball head coach, Johnston brings experience, a different perspective and philosophy and a drive to win to the Scots. Since being hired in June 2021, Johnston has spent time remotely and in-person absorbing Macalester’s culture and meeting the volleyball student-athletes.

“Moving forward and just trying to get better every day, that’s what we’re doing,” Johnston said.

Johnston accepted the position following the resignation of former head coach Sarah Graves ’04 in February 2021. In a statement from the Athletics Department, Graves said she left Macalester in order to “pursue activities outside of coaching.” Her departure, however, comes after nearly a year of discord within the volleyball team following a Mac Weekly report in March 2020, in which former captains Sophie Parmlee ’21 and Abby Dillon ’21 accused Graves of creating a toxic environment on the team. Both Parmlee and Dillon quit the team prior to their senior year, after meetings with Athletic Director Donnie Brooks, then-Vice President for Student Affairs Donna Lee and, in Parmlee’s case, emails between her mother and then-President Brian Rosenberg. Both felt their concerns were brushed aside, and, ultimately, nothing changed.

In the aftermath of Graves’ departure, some on the team felt that they were left confused, adrift, and without answers. This coupled with the continuing COVID-19 pandemic and postponed fall season created a strange spring for the volleyball team.

“If I recall correctly, we were called into a last-minute meeting, our old coach told us she’d resigned and then left the meeting, and we didn’t ever get answers,” right side player Elyssa Cook ’22 wrote in an email to The Mac Weekly. “I suppose it’s none of my business, but I still feel as though my teammates and I deserved some closure after everything that happened. Our season was also pretty weird. After Sarah [Graves] left, our assistant coach Sam [Sullivan] was thrown into the head coach role.”

In June 2021, Mary Johnston was named Graves’ successor. Johnston comes to Macalester after a successful 11-year stint with the Franklin College women’s volleyball team in which they held an overall record of 130-173. Under her leadership, the team made the NCAA Division III tournament three times and the average team GPA went from a 2.85 to a 3.45. Johnston also held positions as the assistant director of athletics and senior woman administrator at Franklin, a small, private liberal arts school in Indiana.

Johnston will become one of four female head coaches at Macalester. Though a number of programs include woman-identifying coaches as assistants and staff, only four — women’s soccer, women’s basketball, softball and volleyball — have women in their top position. This is not a new situation for Johnston; at Franklin she was one of four female head coaches. Johnston believes that representation is vital in all forms because seeing someone living a dream demonstrates it can happen.

“I remember having a head coach that was a woman that also had a family and those were things that I aspired to do,” Johnston said. “Seeing her able to do that, whether I knew it or not, I was like okay, this can happen right? And now I’m doing that. I have a family, and I’m married and have a wonderful spouse.”

“I think the two most important things we can do is to commit to developing future head coaches and ensuring that our head coaching candidate pools are diverse,” Brooks wrote in an email to The Mac Weekly. “We will continue to do this work.”

During her time at Macalester, Johnston hopes to emphasize the “student” in student-athlete, and provide her players with an environment where they can thrive and support each other both on and off the court. For example, this fall she plans to host a faculty/staff game where players will invite Macalester faculty and staff from outside of the Athletic Department to the game. These invitees will be introduced at the beginning of the game and each player will write a short piece about why they chose each person.

She also brings her coaching philosophy to the program. Johnston sums it up as “simple over complex,” and credits the volleyball coaching program Gold Medal Squared with increasing her confidence as a coach and helping her solidify her style.

“For serving there are keys, for hitting there are keys, there’s footwork patterns that they’ve really focused on, and the women are just brilliant,” Johnston said. “All Mac students are brilliant, right? They’ve been able to really take what we’re saying and put it into practice, and I can tell they’re really thinking about it and working really hard to get better every day.”

Brooks is excited about Johnston’s hiring, and he believes that she brings a winning culture and commitment to the team, as is evident from her tenure at Franklin.

“Coach Johnston leads with care, but is also a fierce competitor,” Brooks wrote. “At Franklin, she built a strong program that unified players and coaches… They experienced the kind of success and growth that I hope for our program.”

Senior athletes, who have played through the coaching pivots and the entire COVID-19 pandemic are looking forward to playing and echoed Brooks’ enthusiasm for Johnston’s tenure.

“Our new coach is great, and I’m very excited about where she can take us,” setter Claire Loomans ’22 wrote in an email to The Mac Weekly.

“[Johnston] has a very high volleyball IQ (knowledge of the game), and she brings great energy. We’re already starting to win games; it’s been such a dramatic shift,” Cook ’22 wrote. “We have some grit now — I don’t exactly know how to describe it, but the energy has changed and we’re bouncing back from our mistakes to win games.”

Results from the team’s first games at the Macalester Invitational during Labor Day weekend echo Cook’s sentiments. Throughout the four-game weekend, the Scots went 2-2 winning against Crown College and Buena Vista University. In 2019, their most recent full season, they only won four games and none in the Minnesota Intercollegiate Athletic Conference (MIAC). Macalester has not won a MIAC game since 2016 when the Scots beat St. Olaf College, and the MIAC is one of the best Division III conferences in the country. Conference play is set to begin on Sept. 17 against Carleton College on the Scots’ home court.

“We play in a really tough conference,” Johnston said. “The Minnesota conference is one of the top in the country. I mean, there’s a team in our league [St. Benedict College] that is ranked in the top 25.”

Players, coaches and Brooks, however, are hopeful about the season. Brooks is looking forward to the winning mentality Johnston brings to the team; Johnston is awed at the work ethic and intelligence of Macalester students. Cook noted that she has seen more improvement in the past two weeks than in her past three years combined at Macalester.

“In terms of adjusting to our new coach, I think it’s going as well as could be expected. There are always growing pains when leadership shifts,” Cook wrote. “Everyone’s working hard to improve, though, and I think we’ll see that pay off. I’ve started to love the game again.”