In the Works: Jiaying Wu ’23 on digitizing art and the story behind data accessibility 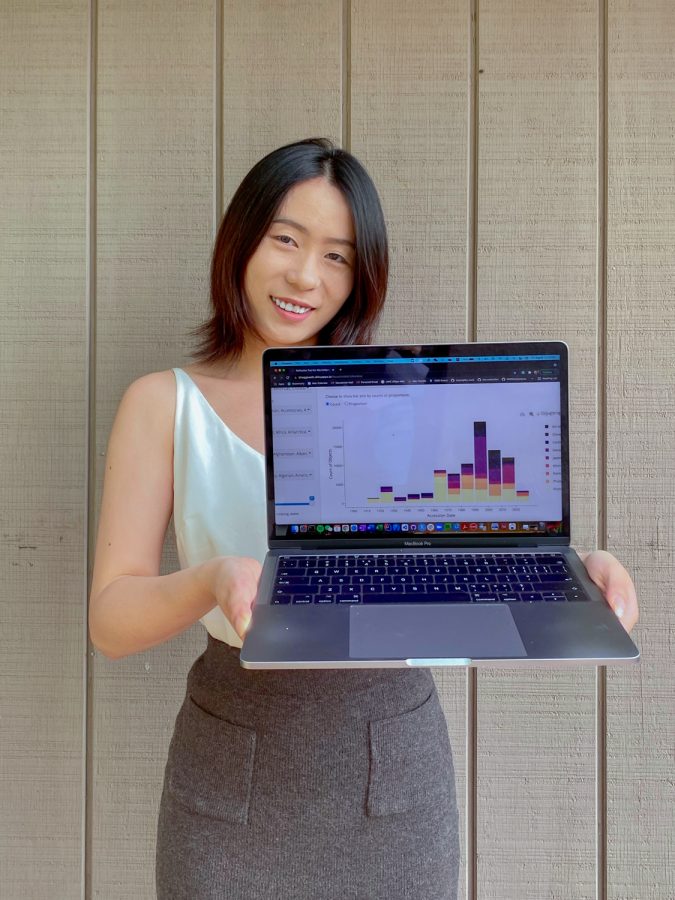 Jiaying Wu ’23 is pursuing a computer science and mathematics double major at Macalester College. She worked as a data analyst intern at the Minneapolis Institute of Art (MIA) this summer. As a recipient of the Macalester Summer Internship Grant 2021, she created a data visualization tool for the curators at the MIA by combining computer science and artwork. The following is part of an interview The Mac Weekly conducted with Wu. This transcript has been slightly edited and revised for clarity.

The Mac Weekly (TMW):  What is the key focus or argument of your piece of work?

Jiaying Wu (JW): Because I was doing this work for the Minneapolis Institute of Art (MIA), I definitely wanted to keep the client’s interests in mind. One of the main jobs we did was creating a website for them. This is a reflection tool for MIA to speculate if it has enough artists from underrepresented groups. For example, what’s the gender ratio in the artwork that is on display? So one goal is for them to check if, in the past two years, they have met their goal of getting more diverse art objects. Second, what can they reflect on from before? Is there anything missing? Is there anything more we can do?

TMW: What has been the most interesting discovery throughout the process?

JW: Personally, I think I learned a lot. I could never imagine myself working in a museum using my coding skills. That’s something really amazing for me. I realized what they have are many historical documents. For a long time, we tried to formulate these historical documents. They don’t have anything that is numerical. It’s a whole chunk of strings. We have to separate it, read it — it’s more than ten thousand data pieces. It was huge, so we couldn’t do it one by one. I had to find a code to have the algorithm read it and then separate them to understand what was there in the past. As a comp sci student when I enter something – when I have an input – I will pay attention to the values. But in the art world, it’s a bit different. You have to understand —  they have a different format. Everyone tries to be free and articulate whatever they want to articulate.

I’ve learned a lot about how to communicate with the art world. I have a bit of an art background. Just I did some painting and drawing, but I never actually talked to such people in the art world. And for this MIA project, I have to talk to them. I have to explain to them how the tool works. I have to use human language and not just code line by line. You have to try to sell your work to them and say, “Okay, what can I do for you?”

TMW: What motivates you to do this work?

JW: I got this opportunity from Professor Brianna [Heggeseth, associate professor of mathematics, statistics, and computer science]. She had been doing similar work in the past few years. In the beginning, we didn’t have a general sense of what we were going to do, maybe we wanted to visualize data, but we didn’t know that we would decide to make a program in the end. As time goes, you realize, “Okay I have this data and I can include more data. I can make something more accessible to everyone.” I guess that motivates me. When you know more about your job, you do more and then you explore something and that makes everything so good. I do Comp Sci, I do data. Now, to do that with art —  that really excites me.

TMW: Where do you see this work taking you in the next five years?

JW: A lot of things will become more and more digital in the art world. Earlier, in the art world, they had a written format of what they have. What is this artwork? When did they buy it? Who’s the artist? Where did the artist come from? But now, it’s the 21st century. We tried to put everything on the computer, and you want to have a better database system for your museum. I think some museums already have really good database systems and when you use the Application Programming Interface (API) from them, it’s very good already, super clean. MIA is on the way.

This is just the beginning. Actually, just a taste of MIA. Now, everything is confidential. We can’t share them with the public because of data confidentiality. But I was suggesting to them that they could have a public version in the future. I suggested, “You can have an app there that visitors can click on and see what kind of collections you have. How many women artists do you have? How many people are Native Americans?”

JW: So many! There were so many days that I sat in front of my computer at my house because I work from home, and I said, “I don’t know how to code it.” I know logically, how to make the algorithm work, but I didn’t know how to transform it to R [software] which is the language I use. So many times I just sat there and tried to Google what’s the issue here? What’s the error here? It just takes so long. Sometimes, even professors don’t know what the issue is, so we troubleshoot together. We try to fix the issues all the time. That’s, I guess, a big part of the job. People see websites and say, “Wow, this is so pretty!” but they don’t often see the work and frustration that goes behind it.

TMW: If there is one thing you wish you knew before getting started, what would it be?

JW: I just started right away. I didn’t think about it that much. I gained more knowledge as we went ahead, but I dived in. It was tough but I got to work for the MIA. So, there’s nothing I wish I knew before. I’m just happy that I was able to do all this. I’m just glad Brianna [Heggeseth] was patient enough and that we worked together. So, you just do it!

JW: I wish the data could be public. I hope it’s not confidential forever. I wish that one day, I’ll be able to modify the app and make it even better, work on it and that it will be public. It’s hard but that’s my goal.

JW: It’s a really good project, and I hope that next summer, other people will work on this as well and that it’s going to be something that continues through generations. People before me worked on it last summer, and I hope this continues. Museums are important, and I think work like this helps artwork become more accessible and helps us to reflect on what artwork is at the MIA. I really want to make the app better and hope that this data is public in the future. It’s all just a start.