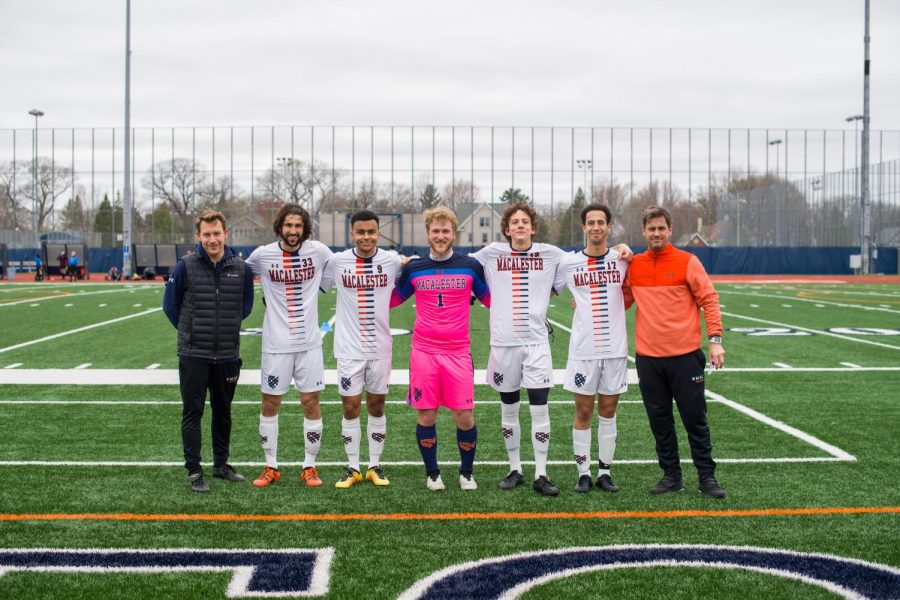 Forward Theo Nsereko ’21 scored the last point in the final men’s soccer game in a 3-1 win for Macalester against Hamline in the game’s last minutes on Sunday, April 18. Forward Etienne Chenevert ’21 assisted the second goal by midfielder Jack Mueller ’22 which broke the 1-1 tie in the team’s final senior game. Men’s soccer had previously won against Hamline 3-0 and tied in games with St. Olaf College and Augsburg University. Other graduating seniors on the Macalester Men’s Soccer team are midfielder Sabri Fair #17, midfielder Max Starks #24, midfielder Aidan Keefe #12 and goalkeeper Cade Fink #1. These seniors helped the Scots win 30 games and qualify for the MIAC Playoffs from 2017-2019.

This correspondence was completed over email.

TMW: How was your final college soccer season?

Nsereko: “Although we played a shortened schedule and didn’t get the chance to compete for the conference championship and NCAA tournament, I feel like we accomplished a lot this year. Going from playing non-contact in small pods at the start of the year to finishing our season undefeated is a testament to the commitment and perseverance of the team. As a senior, it was incredible to finish my career on a high with a win. Every player on our team played significant minutes this year and contributed to our performance.”

Chenevert: “I enjoyed my final season of soccer here. It wasn’t how it usually is, but I still got to play soccer and that’s all that matters.”

TMW: What can you remember the team really worked on in 2021? How did that play out on the field?

Nsereko: “This year was all about development. Without a true preseason and with limited opportunities for team events, it took a lot of work to build the team chemistry necessary for success. Limitations on our practices due to COVID also created another obstacle. Despite this, we all found ways to get better as individuals and as a group. In a regular season, we have only played together for a couple weeks before our first game. This year, we waited 7 months. When it was finally time to play, everyone was able to channel the hard work we put in prior to the season to perform at our best.”

TMW: In a broader context, how has your time at Macalester affected your perspective?

Chenevert: “If I had not gone to Macalester I am almost 100% sure I would not have been a geology major, so Macalester allowed me to follow my passion for the natural world through geology by providing me with a great geology department, supportive classmates, and unique summer opportunities. Mac changed my outlook on life by making me live way out of my comfort zone. This made me struggle, but through those struggles I was able to figure some things out and find a more stable peace.”

Nsereko: “Both on the soccer team and in the broader Macalester community, it has been impactful to be part of a community with such strong values and commitment to change. Throughout my four years on the soccer team, tough conversations have always been encouraged and it’s never been enough to just play soccer. We recognize, and act on, our ability to enact change. This is a microcosm of the Macalester community as a whole.”

TMW: What are your career goals or plans for the future?

Nsereko: “Starting this summer, I’ll be working as a Private Equity Analyst at Goldman Sachs in New York City.”

Chenevert: “I plan to go to graduate school at Indiana University Bloomington for a masters degree, where I will study rivers and deltas. I know many things will change in those two years, so I really do not have any further goals or plans yet. However, I do hope to live an active lifestyle, be outdoors a lot, and eat good food for the rest of my life.”

“Eti, Sabri, Aidan, Theo and Max have all carried themselves with strength and integrity, never forgetting that each day we have as a program is a gift. Their willingness to work hard and simply be grateful to be together has guided the daily mentality for our entire program,” Olson said.

“The approach to this spring was about the appreciation and joy of the game, to award equal playing time to everyone in the program. We have all given so much during the past 13 months or so of the pandemic that we all felt this was the best way to reward everyone. That said, the seniors were fantastic. In four games, we were undefeated, scored 7 goals and conceded only 2. The seniors were the backbone of this success.”