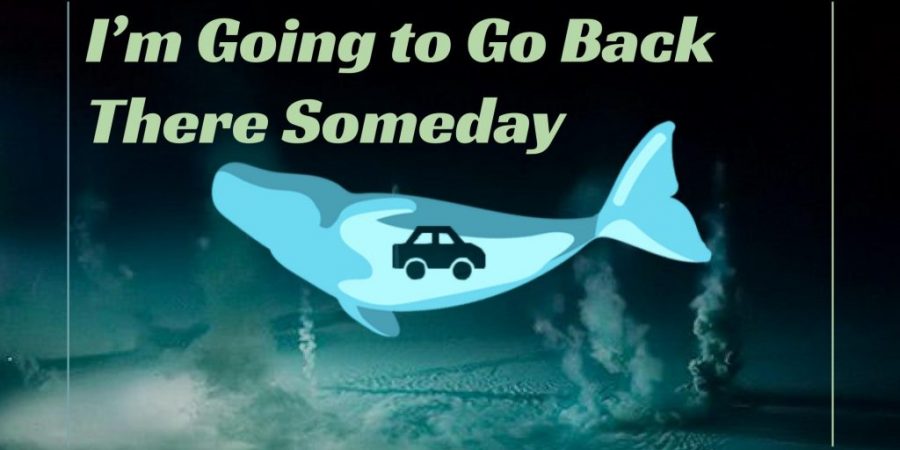 Promotional poster for “I’m Going to Go Back There Someday.” Art by Angus Fraser ’22.

The end of Macalester’s socially-distanced 2020-21 academic year will be marked with stage performances in a makeshift auditorium on Shaw Field. In an unprecedented maneuver, the Theater and Dance (THDA) Department’s senior honors projects “I’m Going to Go Back There Someday” by Asher de Forest ’21, “Como la Tierra” by Gretta Marston-Lari ’21 and the department’s spring dance concert will be held outside and in-person as the year comes to a close.

de Forest’s “I’m Going to Go Back There Someday” has been in the works for several years, undeterred by the pandemic. In 2019, de Forest presented a short story version of the piece at Family Fest, but he started writing parts of the play much earlier through different creative writing assignments before his sophomore year.

“I took Playwriting/Textual Analysis. The assignment was to write a one-act play, and I thought that one-act just meant no intermission,” de Forest said.

“[For another assignment] we had to tell a fairy tale or a children’s story out of order. That assignment led to what in the play is: the part that takes place in the whale. At the same time I had been working on these other scenes in this road trip and then I realized like, ‘oh wait, these go together,’” de Forest added.

Somehow, “I’m Going to Go Back There Someday” includes both the Spice Girls and the Muppets. The play is titled after a Muppet musical number in which Grover, an alien from outer space, sings about his struggle to figure out where he’s from.

“This ties in because Gary, my character, has a habit of relating his life and understanding it through stories,” Ndunzi Kunsunga ’22, who plays the lead role said.

Familiar fictional characters such as Pinocchio, Jonah from the Bible and the shipwrecked Mariner from “How the Whale Got His Throat” by Rudyard Kipling also make an appearance.

Kunsunga is an environmental studies major from Minneapolis with concentrations in math, psychology and theater. de Forest is a theater and creative writing double major and identifies himself as a playwright, rather than an actor or director. Both de Forest and Kunsunga explain that the play’s thematic journey, though layered with humor and narrative references, is actually about grief, loss and finding closure in community and humanity.

“This is about a man trying to figure out his life after his dad died. It’s about family,” Kunsunga said.

“A lot of other types of art I’ve done are about grief, but also, I think it’s funny,” de Forest said. “We can tell the stories that are really difficult and human — but you’ve got to have joy, you’ve got to have laughter. None of us are one thing, and I don’t think stories should be either.”

Both de Forest and Kunsunga admit the rehearsal process has been complicated. Rehearsals have been taking place in-person throughout module 4 with masks, and performers will still be wearing clear, coordinated masks on stage during the performance. Module 3 rehearsals were remote, however.

“It was fully remote for more than half the process,” de Forest said. “I was in Washington, a couple others were not in the Twin Cities, one cast member was in a different country.”

“There’s the blessing side of it,” de Forest said about utilizing Zoom in different locations. “This never would have been able to happen before, but also, that’s hard.”

“Quarantine has been really bad — but one saving grace is that I missed humans so much. And for a contribution I joined this play,” Kunsunga said. “I have to bike an hour to get to Mac.”

“It’s one of the spaces where I felt most alive,” Kunsunga added.

Rehearsals will be ramping up for tech week and dress rehearsal, April 26–29, which will use a stage set up on the auditorium steps of Shaw Field with help from THDA tech support.

Kunsunga said the director, cast and crew have all been working exceedingly long hours for the production. Throughout his extracurricular work in theater and journalism and his college experience at Macalester, Kunsunga said he has found meaning in stories like “I’m Going to Go Back There Someday.”

“I remember when I took Playwriting. My professor exposed us to this essay that was described as, ‘Why we write plays in times when it feels like the world is ending.’ This play [“I’m Going to Go Back There Someday”]… is not going to solve everything. But it’s a play about grief, which I know everyone can experience,” Kunsunga said.

“Above it all, Asher wrote a damn good play and I want people to see it.”

The THDA season is fast-approaching. The Macalester Spring Dance Concert will be opening on Wed. April 28, “I’m Going to Go Back There Someday” opens on Thursday and “Como la Tierra” opens Friday April 30. All three productions will have additional shows on May 1 and 2.