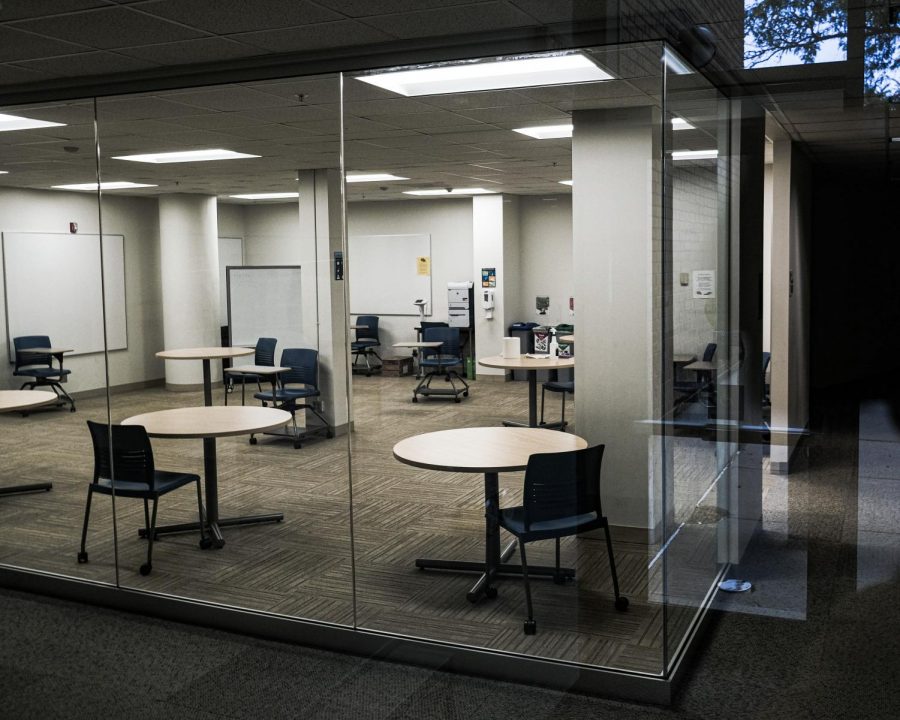 The workspace on the first floor of OlRi. Photo by Malcolm Cooke '21.

Macalester STEM students — particularly in the chemistry and physics departments — have been frustrated with a lack of accessibility, inclusivity and diversity in their departments for years. From heavily weighted tests and weed-out courses to a lack of regard for student mental health, students say that these departments at Macalester have kept historically marginalized students out of their subjects.

Students in these departments said that there needed to be a change, and that it should’ve happened years ago.

“It was late summer, and I was reading there were a lot of very public science discussions just within the scientific community about how STEM essentially keeps out people of color,” physics major Nick Velikonja ’21 said.

“It just reminded me of what I should be doing,” he said. “I should be working with John Cannon, the chair, to try to be like, ‘come on man, do something about this.'”

In January, students from the physics, chemistry, biology and neuroscience departments met to discuss the parallel efforts they had been making to work towards a more equitable environment. Over the course of meetings in January, February and March students wrote an open letter addressed to the STEM departments. They outlined their concerns.

“We were trying to figure out what way we… could make a statement to the departments being like, ‘this is not okay, here are some ways that this can be changed,’” chemistry student Conor Broderick ’21 said.

Physical science classes are often structured so students must do well on heavily weighted tests, which account for as much as 70% of the final grade, to get a good grade in the course. Students also feel like they are expected to have background knowledge on the material to get a good grade on homework. Physics students took a survey of their majors through email and based on the results, student leaders determined that this is one way the departments keep out BIPOC students, as BIPOC students are less likely to have had access to IB and courses in high school.

“Something like 60 or 70% of the respondents took AP or IB physics in high school,” Velikonja said. “So if you haven’t done those things and you don’t have some kind of STEM background, you’re gonna have a hard time in the department.”

“There is institutional data that first-generation college students, BIPOC students and low-income students are overrepresented in grades C and below in the first two years of all pre-med courses,” chemistry major Rafael Viana Furer ’22 said. “So we do know that the school, whether they want to be or not, is setting the students at a disadvantage.”

“When you get the average of a C on the exam, you’re probably going to end up with a 71 in the class,” chemistry major Shreya Nagdev ’22 said. “And now, according to the department, that’s great. You did fantastic. But overall, that doesn’t do well to your psyche and how confident you are.”

A group of five BIPOC students is pushing back on issues like these in the chemistry department. The students first got involved last summer in diversifying chemistry seminars and creating a summer bridge program, where students coming into intro level courses can get a head start on the content, which were both successful efforts, before joining forces with physics students. The chemistry seminar allows opportunities for students to hear about topics in chemistry and a place to network.

“This [chemistry seminar] is a super uncomfortable space for brown people,” Furer said. “There were like seven guests or 15 guests in total. Three of them were BIPOC.”

“It feels like they [the professors] don’t know that they’re being harmful,” Furer continued.

The group also suggested some changes to the chemistry department outlining how the department could better support underrepresented students. For example, the group suggested altering course structures to relieve stress and create a more equitable environment, and adding social justice initiatives to classrooms.

Physics students met with faculty and staff for the first time to discuss criticisms about the department in November 2019. Students brought up similar issues of accessibility and diversity, sparking a year and a half long debate and kindling change in the physics department.

“The department has been kind of brutal for students to be in for a while,” Velikonja said. “It’s not about teaching you and letting you grow as a student. It’s about testing whether you understand the material.”

“There’s a really big focus on having the intro classes come in with a level of expectation that students have been really, really prepared for college level physics in a really rigorous way and it’s sort of like a ‘keep up or get left behind’ pedagogical style,” Broderick said.

Diversity is also lacking in the physics department, as it is with chemistry.

The students’ demands for physics professors in the open letter and in meetings included mandatory diversity training, a cap on weights of any one test, increased community building in introductory courses and generally more room to fail built into class structures. However, students feel that professors have not necessarily been receptive to their requests.

“Anytime you contact someone in the upper echelon of the department, you say, ‘I want this issue fixed,’ they say, ‘how are you going to fix it?’” Velikonja said. “Essentially, ‘we’d love to help, but we want you to tell us how to fix it.’”

“What I need out of the professor is for him to say, ‘I recognize what you’re talking about, and I’m going to use the knowledge and skills within my skill set to accomplish that,'” Velikonja continued.

Students like Broderick were pleasantly surprised at the recent response from STEM department professors to students, released in The Mac Weekly last week.

“It’s nice to see that there seems to be an active response cross departmentally,” Broderick said.

Physics professor James Heyman acknowledged students’ concerns and recognized the changes that needed to be made.

“Of course, it was kind of a shock for the faculty, but it was really good,” physics professor James Heyman said about the open letter. “I’m glad the students did that.”

Heyman said that the introductory physics classes students call “weed-outs” are not intended to deter anyone from becoming a physics major.

“We do not intend intro physics to be a weed-out course, and we are somewhat surprised at that characterization,” Heyman said.

Some students may come into intro physics knowing the material from their AP course in high school, but that does not mean that the department is trying to gatekeep, Heyman said.

“We need to do a good job of letting people know that just because you find intro physics hard, that may say a lot about your preparation, but it doesn’t necessarily say much about your abilities,” he continued. “We want everyone to do well.”

Heyman acknowledged that this year, due to the pandemic and the module system, progress towards a more equitable environment has slowed, and so while the students have good ideas, they can not be put into place immediately.

“We want to make sure that this is done, that we know we get the best advice, and we make the right changes the first time,” Heyman said.

Chemistry department chair Kevin Kuwata, like Heyman, said that progress has been difficult with the pandemic. But students are frustrated with this faculty response.

“And then students graduate and things stop happening,” Broderick said.

Kuwata also said that with fewer chemistry seminars due to the pandemic comes fewer guest speakers and less chance for BIPOC speakers to interact with students. He expressed that the chemistry department is open and willing to speak about student governance and increasing diversity and accessibility.

“My colleagues have… had a really strong commitment to increasing diversity, to wanting all students to be able to succeed,” Kuwata said.

Kuwata described the success they have had in making general chemistry classes available as first-year courses, as there are fewer students, higher accountability and a higher level of support. He noted that the chemistry department could work towards creating a similar environment in other difficult introductory courses.

While the students criticize heavily-weighted tests, though, Kuwata made a case for it.

“There is evidence in the education literature that tests… are a way that really can be pedagogically effective, meaning that there’s a way that you do have to have mastered the material and really internalize it,” Kuwata said. “Again, this is something that we will talk about.”

Professors say that they hear the students, they hear the concerns brought up in the letter and they are willing to work towards implementing the demands their students have laid out for them.

But students are, and have been, wary of the slow pace of change.

“I want people to take it seriously and they’re not taking it seriously right now,” Velikonja said. “So, yeah, deal with it. Now. Yesterday. Five years ago.”