Chauvin convicted on all charges 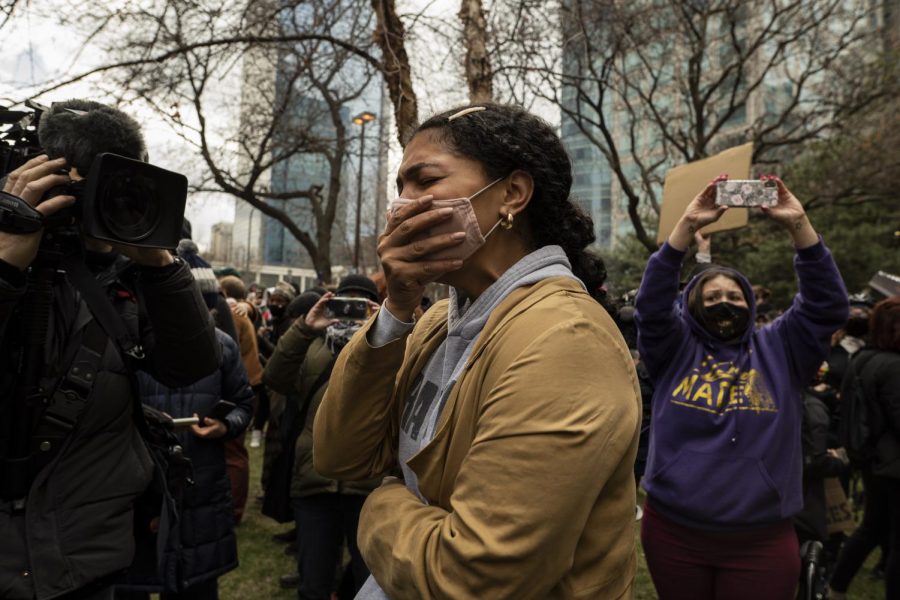 Emotions erupt among the crowd outside the Hennepin County Government Center in as gatherers learn of Derek Chauvin's guilty verdict. Photo by Celia Johnson '22.

The prosecution and the defense rested on Monday, April 19 after making their closing statements. Just after 4 p.m. on Tuesday, after only ten hours of deliberation, the jury announced its decision to the court.

Hundreds gathered outside the Hennepin County courthouse to wait for the verdict, as officers and National Guard troops watched, stationed on the government building and around downtown. After eleven months of protesting and organizing and a tense afternoon waiting for the verdict, the announcement brought a wave of relief to the crowd. Cheering, hugging, crying and chants of George Floyd’s name broke out across the square as people read out the news from their cell phones.

Advocates who gathered at the court said they came to celebrate this as an important step, but a small one on the long road towards racial justice and equality. Chauvin is the first white police officer in Minnesota convicted of murder of a Black person, but Floyd is far from the first to die at the hands of police. Just last week, former Brooklyn Center police officer Kim Potter shot and killed Daunte Wright during a traffic stop, setting off over a week of protests in the Minneapolis suburb.

Del Shea Perry, whose son Hardel Sherrell died in the Beltrami County Jail in 2018 after guards declined to provide him medical care when he asked for it, reminded the crowd that the broader fight for racial justice isn’t over.

“Today gives me hope,” Perry said. “This is a small victory. There’s still a lot of families like mine who have not gotten justice.”

Chauvin was arrested immediately after the jury delivered the verdict. Judge Peter Cahill revoked his bail, so Chauvin will wait in jail until his sentencing eight weeks from now. Minnesota’s sentencing guidelines suggest a 12.5-year prison sentence for Chauvin, since he has no criminal history.

A quiet crowd of around 100 Macalester students gathered to commemorate the decision on the Great Lawn in an impromptu event hosted by the Department of Multicultural Life and the Center for Religious and Spiritual Life. President Suzanne Rivera, Dean of Multicultural Life Marjorie Trueblood and several students addressed the crowd to discuss the verdict and the ongoing fight for racial justice.

This is a developing story. Check back for updates.

Shouske Noma contributed to the reporting of this story.