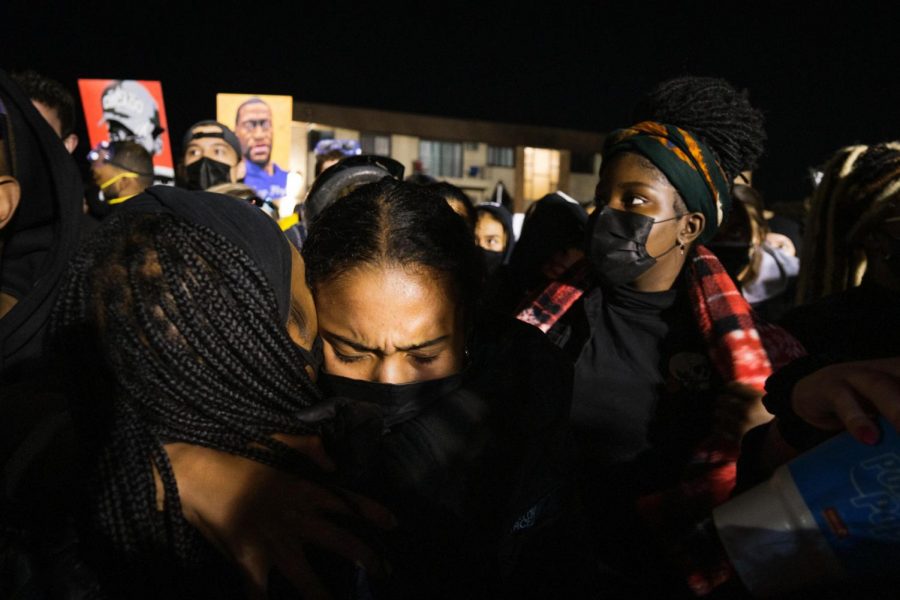 Brooklyn Center saw the most arrests and the quickest law enforcement crackdown yet on Friday, April 16, during the sixth night of protests over the police shooting of Daunte Wright. The Hennepin County Sheriff’s Office declared the protest unlawful around 9:50 p.m., ordering hundreds of protesters to disperse. Less than 15 minutes later, law enforcement officers blocked the street and arrested around 136 people, including two Macalester students working as street medics.

Protesters have filled the street across from the Brooklyn Center Police Department every night since last Sunday, despite curfew orders throughout the week and law enforcement’s use of tear gas, rubber bullets, flash-bangs and marking rounds. Local and state police and National Guard troops had arrested more than 130 people through Thursday at the protests; Friday’s arrests brought that number to over 270.

The night began with music, speakers, dancing and a march down the block — a calmer atmosphere than some of the previous nights. Protests on Thursday had ended with no arrests for the first time since Wright was killed on Sunday, and Brooklyn Center Mayor Mike Elliot released a statement Friday afternoon declaring that the city would take “a different approach” that night — there would be no curfew.

Some protesters wore bathrobes in a display of solidarity with Samira Hassan, who was arrested in a bathrobe in front of a neighboring apartment building on Wednesday night. Local organizers including DJ Hooker, Brandyn Tulloch and Nekima Levy-Armstrong led the march and speakers.

The crowd stayed outside the police department after returning from the march, listening to speakers and tying air fresheners to the fence in memory of Wright, who was pulled over and killed by Brooklyn Center police officer Kim Potter for an air freshener hanging from his rearview mirror, according to Wright’s mother. At first, law enforcement lingered further back than they had on previous nights, staying near the station instead of lining up against the two layers of fencing separating them from protesters.

But around 9:30 p.m., law enforcement advanced as a few protesters shook the outer fence and lobbed water bottles toward the station. At 9:36 p.m., officers shot a flash-bang towards the protesters; about 15 minutes later, they announced via loudspeaker that the Hennepin County Sheriff’s Office had declared the protest unlawful.

Officers swiftly surrounded protesters at 10:05 p.m. from every surrounding block. Some fled or took shelter in a nearby church, but the kettle happened fast — in about two minutes — and the police rounded up hundreds of protesters.

Video of the kettle at Brooklyn Center Police Dept tonight, as it happened. Troopers surrounded the protest from all three sides, then burst from behind the fence protecting the station.

At least two Macalester students, both of whom were working as medics, were arrested at the protest. Both were held without bail at the Hennepin County Public Safety Facility until Saturday afternoon, when they were released.

While in jail, the arrested students made calls to friends saying they had received spoiled food and that their cells remained brightly lit throughout the night. They said they were allowed one hour per day to make calls and shower.

Finn Odum ’21, a friend of one of the two students arrested, went to Hennepin County Public Safety Facility on Saturday in an attempt to help those arrested. Odum heard from them last night around 10:30 p.m. as they were detained. It’s made for a stressful day.

“I don’t know how to assess how [they’re] doing,” Odum said while waiting for the students’ release from jail. “It doesn’t sound great.”

The jail released protesters throughout the afternoon on Saturday, and an officer there told The Mac Weekly that the remaining people arrested during Friday’s protest will “probably” be released before midnight.

One of those protesters released on Saturday was Lexi, a 22-year-old St. Paul resident who requested to be identified by first name only. After she was released, she remained outside of the Hennepin County Public Safety Facility to direct people who showed up to demand protesters’ release.

Lexi was arrested last night as she was trying to help another protester find a ride home. She decided to go to the protest after hearing that there wouldn’t be a curfew.

“I get really nervous being out there after curfew… so I chose to go on a night when they didn’t have a curfew, and a night after things had been really peaceful,” Lexi said. “I had really high hopes.”

Police caught Lexi during the kettle. Once in jail, she said, police declined to answer her questions and gave her mixed responses as to what she was being charged with.

In an email to The Mac Weekly, Rivera wrote that she has been working with student leaders and Student Affairs staff to “offer assistance” since early that morning.

“All the ways the college supports and affirms student activism have not changed since we first articulated them last summer and repeated them in the fall,” Rivera wrote in her email. “We believe every Mac student has the right to exercise freedom of speech and we value social action as one way to be a change agent.”

She encouraged students in need of help following protests to contact Macalester Public Safety. Director of Public Safety Jim Kurtz wrote in an email to The Mac Weekly on Saturday afternoon that no students had contacted the department requesting help regarding the protests.

The mass arrests and use of crowd control tactics came in spite of multiple decisions by local officials throughout the week aimed at limiting the use of force against protesters. Both the Brooklyn Center and Minneapolis city councils voted earlier in the week to restrict the use of tear gas and other crowd control weapons. Even so, law enforcement continued to use flash bangs and rubber bullets during subsequent protests, including on Friday.

Despite this, law enforcement accosted journalists and protesters alike.

After officers converged on the protest, they ordered members of the press to stand in designated areas apart from the protesters, and before leaving law enforcement photographed some of their press credentials, government IDs and faces. Officers temporarily detained and photographed the face and ID of one reporter from The Mac Weekly outside of a gas station on Humboldt Street; another was thrown to the ground by law enforcement during the kettle.

Other journalists reported that police maced, tackled and punched credentialed and clearly identified members of the press.

Protests show no sign of slowing in the next few days. In Minneapolis, closing statements in the trial of Derek Chauvin for the murder of George Floyd will begin on Monday, with a verdict expected sometime in the next several days.

Elliot has issued an 11 p.m. curfew for Brooklyn Center for Saturday night in anticipation of continued protests.