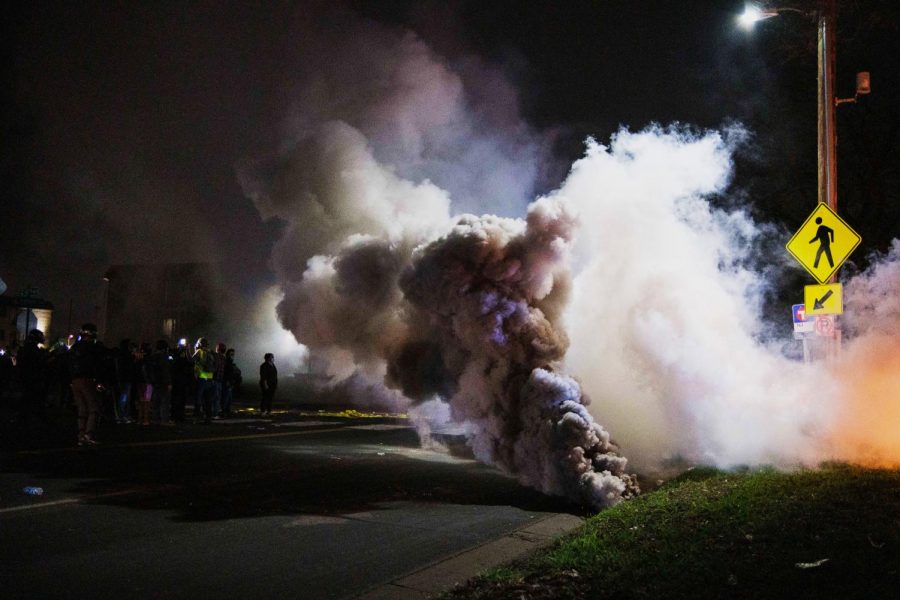 Police shot teargas into the crowd of protesters outside the Brooklyn Center Police Department. Photo by Kori Suzuki ‘21.

The Twin Cities have once again seen a resurgence of protests and violent police pushback this week after former Brooklyn Center police officer Kim Potter shot and killed Daunte Wright, a 20-year-old Black man, during a traffic stop.

Potter resigned from the police force on Tuesday, and on Wednesday morning, she was arrested and charged with second-degree manslaughter. Potter was released on bail later the same day.

Protesters have taken to the streets of Brooklyn Center nightly since the shooting, gathering at the intersection where Wright was shot and at the police station a few miles away despite city-wide curfews Sunday through Thursday. Police and National Guard troops have stood between protesters and the police department building and attempted to disperse crowds with chemical irritants, flash bangs and rubber bullets.

Police violence has become a familiar conversation in Minnesota this year. Most recently, Minneapolis Police shot Dolal Idd in Minneapolis on Dec. 30, reigniting protests. Right now, Minneapolis is finishing the fourth week of testimony in the trial of Derek Chauvin, who is charged with the May 2020 murder of George Floyd.

Speakers at a vigil for Wright on Monday emphasized that his killing was not an isolated tragedy, but rather a constant and persistent pattern of police aggression and racism towards Black communities, particularly in the Twin Cities area.

“You heard prayers go up about the situation, about the moment, but you’ve gotta understand that there is a need in our community right now,” said Anthony Galloway, executive director of the community arts organization Arts-Us. “We want to offer up the prayer that this ain’t a fair-weather momentary support from all of you.”

Brooklyn Center, a northern suburb of Minneapolis with a large Black and immigrant population,  has turned into the front line of the protests, and the face-offs with law enforcement. The Brooklyn Center police station sits across the street from a residential neighborhood of apartments and homes, where residents have been feeling the shocks of the conflict between protesters and police.

Law enforcement have lined up in the parking lots and lawns of the apartments across the street, blocking residents from entering or leaving their homes. Tear gas and other chemical irritants set off by police have hung in the air around the residents’ homes for several nights in a row. Law enforcement officers have shot tear gas canisters onto porches of the apartment buildings, where protesters and residents have scrambled to extinguish them.

The protests die down during the day, but the area still bears the marks of the police retaliation. Apartment lawns are streaked with tire tracks, and the street is littered with police paint markers. At a press conference on Wednesday afternoon, projectiles left over from the night before exploded three different times over the course of an hour.

Local and state officials have been piecing together responses to the protests. The Brooklyn Center city council passed a resolution on Monday banning tear gas and restricting the use of kettling to trap protesters and arrest large groups at once. But law enforcement continued to use both strategies in the days following.

In addition to former officer Potter’s resignation, Brooklyn Center’s police chief also stepped down following the shooting. The City Council opted to fire the city manager too, handing control of the police department over to Brooklyn Center Mayor Mike Elliott and appointing an interim city manager.

Law enforcement officials have responded to the protests by upping the police presence and arresting dozens each night. The National Guard, which was already deployed in Minneapolis for the Chauvin trial, doubled its force this week.

Several officials have defended the use of chemical irritants and crowd control tactics, which police have deployed in response to protesters shaking the fencing, throwing water bottles and setting off fireworks.

“I would argue and make the case that last night, the protection of life, the protection of property, and the clear thoughtful use of how these were deployed in a limited manner, made sense,” Governor Tim Walz said in an interview on Minnesota Public Radio on Tuesday. “There is a place for them, once we started seeing projectiles and fireworks [from protesters].”

With officials increasing police forces, implementing curfews and declaring protests unlawful, protesters and community members grappling with the conflict are putting more faith in each other than in politicians.

Every night, community organizations, mutual aid funds and volunteers have kept up a stockpile of food for local residents. Volunteer medics have been on site as well, pulling people out of the crowd when they are injured by mace, tear gas, pepper balls and rubber bullets.

Amid the anger and demands for change, protesters are asking people to show up — and to stick around — for Wright’s family. He leaves behind sisters, brothers, his mother, father and a two-year-old son.