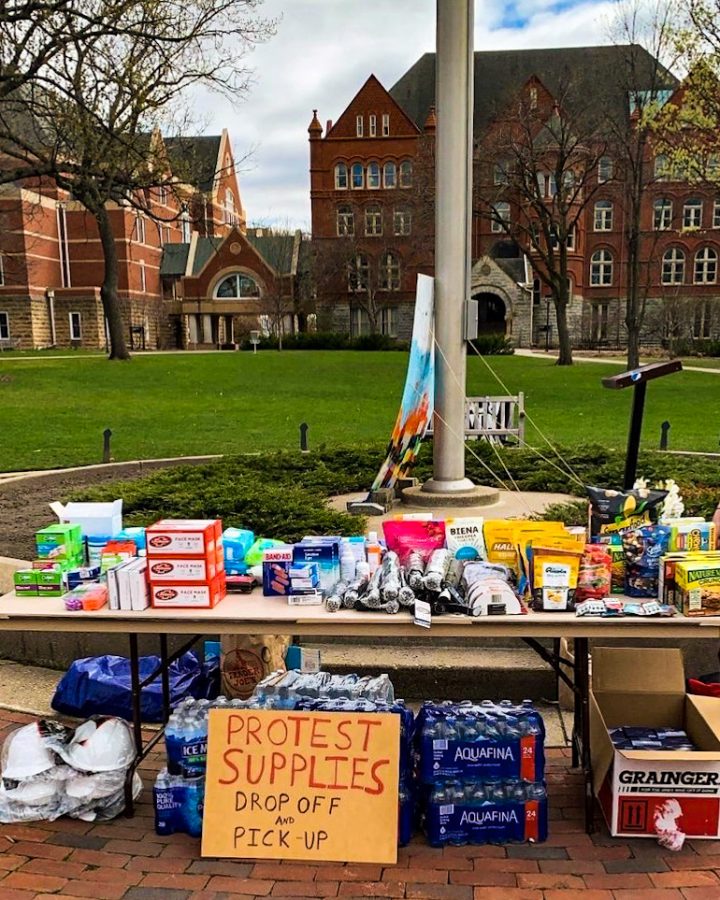 [email protected], a student organizing hub created last summer as students joined the uprisings after the killing of George Floyd in May, has helped spearhead student organizing efforts. Fatiya Kedir ’21, President of Macalester College Student Government and co-founder of [email protected], has been central to student response along with Kubunya Karubiu ’22, creating shared Google Docs for ride coordination, soliciting donations to local mutual aid efforts and offering rides to and from Brooklyn Center protests.

“This year especially, Mac is headed towards a system of mutual aid and understanding community,” Kedir said. “I’ve seen people really show up and show up consistently.”

Kedir said that compared to last year, the smaller size of the current protests has made them feel more dangerous. Police guarding the Brooklyn Center Police Department — sometimes outnumbering the protesters — have deployed tear gas, pepper spray and rubber bullets toward protesters. On Monday, the second night of protests, Brooklyn Center police erected wire metal fencing around the building to keep protesters out.

Having grown up in the Cedar-Riverside neighborhood of Minneapolis, Kedir is “used to being surrounded by… the realities of racial injustice.” She sees the killings of Daunte Wright and George Floyd not as isolated incidents, but as indicative of pervasive systemic racism in the United States. She hopes that Macalester students continue to advocate for racial justice beyond the weeks of fallout from Wright’s death.

“A lot of us, we get to go out there and we get to protest … but at the end of the day we have the luxury of coming back to St. Paul and we get to sleep in our nice dorms while people who are left in those communities have to deal with the aftermath,” said Victor Wright ’23, a member of the BIPOC Student Athlete Council and one of the organizers of the Trauma Relief Fund.

BIPOC Student Athlete Council organizers hope to continue the work of the Trauma Relief Fund by holding fundraisers and donation drives for racial justice initiatives throughout the year, acknowledging that Daunte Wright’s killing is no isolated incident.

“This most likely isn’t going to be a situation that’s going to end after this weekend, Victor Wright said. “This isn’t a trend or fad.”

Beyond the student groups organizing for Brooklyn Center, a number of students have pulled together their own spontaneous aid efforts. Maddie Rodriguez ’23 and Wilda Batin ’23 have been taking donations from students to put together protest kits and grocery bags for Brooklyn Center residents. As of Thursday afternoon, they had delivered over 100 bags of food to families in the apartments across the street from the Brooklyn Center Police Department. They plan to keep making deliveries daily.

In the spirit of mutual aid, students are extending time and care not just to the residents of Brooklyn Center, but to each other as well. Addie Welch ’21 is one of the students coordinating meal drop-offs for students in tandem with [email protected], an initiative that began this week in light of Wright’s killing. Students can sign up to receive meals cooked by other students and dropped off at their door; they can also volunteer by helping cook and deliver food. Welch said the food-sharing is inspired by abolitionist organizing groups like the Young Lords and the Black Panthers.

“Part of their political platform to political liberation was supporting people along the way in their basic needs,” Welch said.

To Kedir, the work of organizing the Macalester community isn’t always easy. Support from fellow student organizers has been key to keeping up her momentum and avoid burning out emotionally.

“Yesterday I kind of was really overwhelmed, and to be fully frank I pretty much broke down,” she said. “But then this morning I woke up to so many kind messages.”