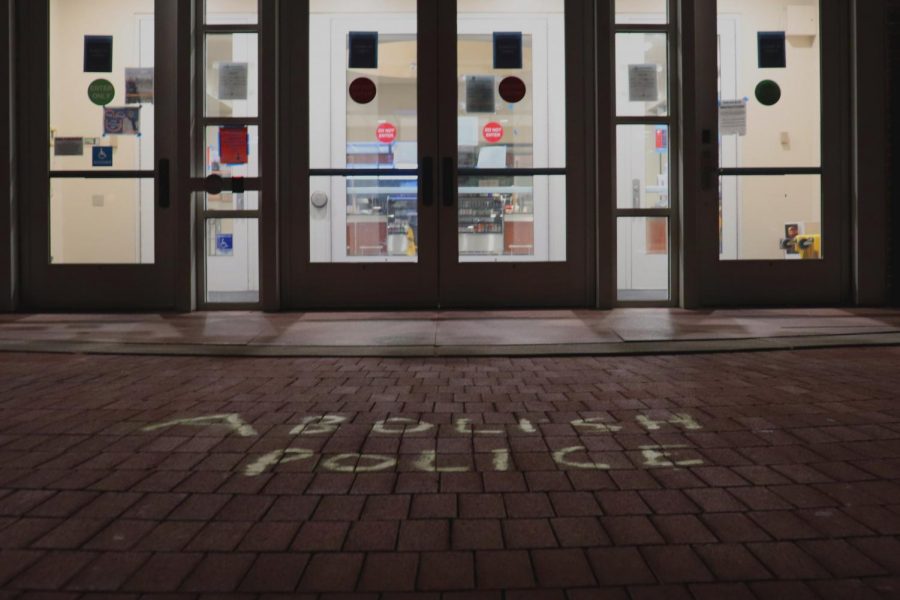 Chalk writing outside of the campus center calling for police abolition. Photo by Shosuke Noma ‘23.

Following the police killing of Daunte Wright on April 11 in Brooklyn Center, Minn., students called upon Macalester President Suzanne Rivera via social media and personal emails to cancel classes on Tuesday, April 13. Macalester classes were not in session on Monday due to one of the college’s scheduled wellness days.

But on Tuesday morning after the start of the class day, Rivera announced via social media and in the Mac Daily that, while she would not cancel classes, she encouraged faculty to not penalize students who missed classes or assignments.

“I want to urge all members of this community to do what is best for them today,” Rivera wrote in her announcement. “For some students, that will mean taking the day off to grieve or to organize… If students choose to engage in their academic work today, they will have that option.”

Since her initial announcement, Rivera explained her decision to not cancel class to The Mac Weekly.

“Cancelling classes would infringe upon the autonomy of those for whom the opportunity to be in a zoom room or classroom might be their only way (because of pandemic-induced social isolation) to process what’s happening right now with other people,” Rivera wrote in an email to The Mac Weekly. “I am trying to honor self-determination by allowing each student to choose what’s best for them.”

Without a clear directive from the administration, the onus fell to students to ask professors for leniency in their classes if they felt they needed it. Students shared that having to make the choice between attending classes and their own mental well-being created additional stress.

“Personally speaking I will tell you I really wish that class was cancelled on Tuesday,” Fatiya Kedir ’21 said. “Monday was a rest day, and I spent none of it resting. I was severely overwhelmed.”

Another student, Elinor Jones ’21 voiced their opinion about the administration’s response on Twitter.

“I don’t think admin understands that not canceling classes in order to keep the options open for [people] who want to connect or who don’t feel very sad is appeasing the wrong group,” Jones wrote Tuesday night. “You’re choosing to cater to those who aren’t saying anything as opposed to those crying out in pain.”

Some professors, however, decided to cancel their classes and reschedule assignments this week in light of Wright’s killing.

“My instincts were to cancel class, open the Zoom room to anyone who wanted to visit and set up a revised schedule for the rest of the week,” Howard Sinker, visiting media and cultural studies professor, wrote in an email to The Mac Weekly.

Sinker noted that he specifically chose to cancel classes rather than declare class optional so that students would feel no pressure to attend.

“I think the word choice was important,” Sinker wrote. “There’s already enough societal stress in the BIPOC communities on campus, especially among Black students, that I was keenly aware of not wanting to add to that.”

Supporting the individual choices for students to attend or miss Tuesday’s classes, President Rivera also wrote to The Mac Weekly saying that, “if any classes or departments did not offer flexibility, I would like to know so that I can reiterate to those faculty the importance of compassion at this time.”

Briah Cooley ’21 said she appreciates her professors who did make class optional and cancel assignment due dates.

“The most helpful part is… leniency and time to speak about how we feel in class, and not faulting anyone for being unprepared for our course” Cooley wrote in a message to The Mac Weekly.

Although classes proceeded on Tuesday, Macalester did cancel this year’s Give to Macalester Day (GTMD), which was scheduled for Wednesday, April 14. In her announcement of GTMD’s cancellation, Rivera urged the Macalester community to further support local nonprofits, rather than the usual focus of GTMD on supporting the campus itself.

“We feel that moving forward with the ‘normal’ proceedings of GTMD at this time would be inappropriate,” President Rivera wrote in her message to the Macalester community on April 14.

President Rivera’s announcements this week — responding to students’ requests regarding Tuesday’s classes and the subsequent cancellation of GTMD — were delayed due to an unexpected problem with the college’s list server. The list server has been non-functional since April 13 at 2 a.m., according to Macalester ITS’s update in the Mac Daily on Thursday morning.

“My response to the call for cancellation of classes is that the college is here for its students, even on the most terrible days,” Rivera wrote in her email to The Mac Weekly. “If we were to cancel all classes, we would be taking choice and agency away. Instead, my position is that each student should do what they need, without penalty.”