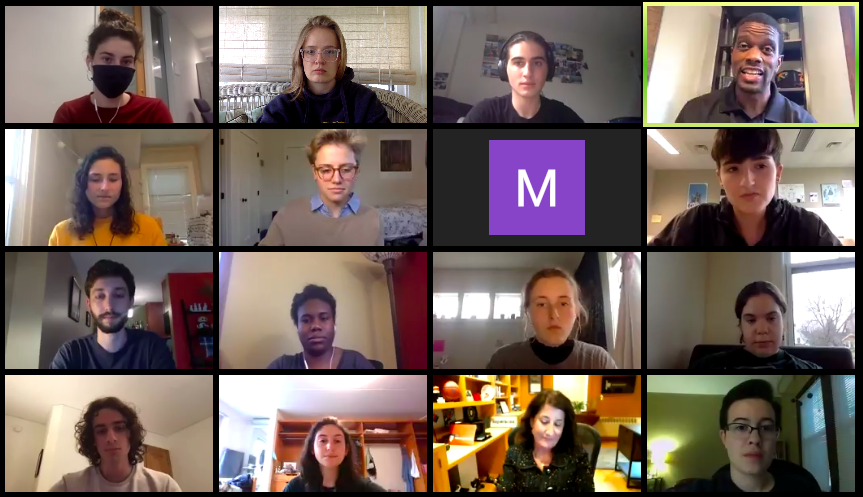 St. Paul Mayor Melvin Carter, Macalester President Suzanne Rivera and Sami Banat ’24 spoke to the Macalester community on Thursday, April 8 about possible alternate police response measures they have discussed in the mayor-appointed Saint Paul Community-First Public Safety Commission. The commission is working to recommend a new “Office of Public Safety” for the city.

Macalester’s Community Organizing Cohort and the non-profit ISAIAH hosted the virtual public meeting on the commission. Carter convened the commission in December, tasking it with reevaluating police responses to non-emergency 911 calls designated a priority-4 or priority-5 — such as calls for noise complaints, parking complaints, disorderly persons or a civilian request for service. The commission is examining trends in these police calls and responses, and considering what alternatives might work better than the current response by police.

Macalester’s Community Organizing Cohort and ISAIAH have been organizing public meetings for the past nine weeks around the theme of existential threats. Last week the Cohort hosted a meeting with Minnesota Representative Todd Lambert on climate justice in the state.

Other community groups represented within the safety commission include St. Paul Public Schools, the African American Leadership Council and the Somali Peace Officers Association. Meetings have included presentations from different government and community groups. The commission will hold its final meeting this month and present a list of recommendations to Carter at the end of May.

The Commission is working in a context of heightened awareness around police violence, since protests erupted across the country last May in response to the killing of George Floyd. Police have killed around 1,000 people each year since 2015, The Washington Post reported, 95% young and male. Black and Hispanic Americans make up 30% of the US population but are killed at over twice the rate of white Americans. On top of that, domestic violence cases went up 30% in 2020 during the stay-at-home order in Minnesota.

After the shooting of Daunte Wright this week by former Brooklyn Center police officer Kim Potter during a traffic stop Sunday, April 11, Minneapolis and Saint Paul went under curfew for several days because of peaceful protests. Both the Brooklyn Center Police Chief Tim Gannon and Potter resigned on Tuesday, in a time when there were already protests occurring around the city about the trial of Derek Chauvin in the death of Floyd.

The closing arguments in the state trial against Chauvin are scheduled to begin next Monday, April 19. Potter is set to face second-degree manslaughter charges for the shooting of Wright after her arrest on Tues.

At Macalester’s meeting last Thursday, Macalester students asked questions and shared experiences about inadequate or harmful police responses after they requested help for public service. Rivera, Banat and several students spoke about lack of trust for police and the way they had been treated in an uncaring manner by officers. Students asked the commission’s Macalester representatives and Carter how exactly they plan to field solutions for police reform in the Twin Cities.

Rivera said during the meeting that the commission has been reviewing and finalizing recommendations for the city on alternative approaches to safety and conflict than armed law enforcement responses. Rivera voiced commission ideas about trained professionals such as a social worker or a neighborhood peace officer intervening and connecting people in crisis with resources they need, such as welfare care and shelters.

Rivera voiced concerns about civilian arrests in escalated situations in Saint Paul because of her own experiences as a social worker in her field of bioethics and research. This has informed her work when police officers have responded with violence and arrest to mental health cases.

Banat said that the commission has been working on recommendations to the city for a new Office of Public Safety.

“We’re looking at an Office of Public Safety that they’re looking at establishing, and looking at the situations that lead to crime in the first place, to prevent crime from the roots and get people’s basic needs met, and expand this vision of these specific calls,” Banat said.

During the meeting Banat and Rivera shared their vision of how public safety could move away from police-centered safety measures.

“I see it as an opportunity to prevent situations from escalating… from situations that weren’t violent in the first place,” Banat said. “These are calls that, oftentimes, when we see brutality arise, we had just a normal call for service that was escalated for no reason by police officers.”

Rivera and Banat shared that, in their time on the commission, they’ve heard from various dispatch officers, patrol cops and other law enforcement. The Macalester representatives encountered resistance in the commission when approaching more significant policing reforms.

“Every step of the way of considering change there was resistance in the group, like, ‘That’s not what we’re familiar with, it would be very hard to change,’” Rivera said in the meeting.

“In the middle ground I was feeling really almost disappointed,” Banat said  in an interview with The Mac Weekly about the commission’s process earlier in the year.

Banat added that police officers sitting on the commission were not responsive to reform ideas.

“[For] a few officers on the commission, it seems they were committed to stopping their institution from changing,” Banat said. “During the discussion phase they were constantly trying to dominate the conversation. They were focused on maintaining the status quo of what is going on now. And we know the status quo isn’t working.”

Banat said there was a turning point in the last two town halls before Thursday’s discussion, where the commission started hearing from local people who had made low priority-4 or -5 calls.

“Amplifying those voices got us back on the right track.” Banat said. “The officers took a step back and didn’t want to engage with what the path forward was.”

Banat said the Office of Public Safety would address types of crime in juveniles and people in crisis, and would increase training of officials such as intervention specialists.

“[We focused on] mobile mental health teams and adding further deescalation training, and vehicle situations decreasing with traffic control,” Banat said. “The Office of Public Safety [would be] addressing groups of crime.”

The commission has heard a great deal of community input, Banat said in the meeting.

“This work has been very data driven, which is important and good, but it’s also important in my view that we have personal stories by those most directly affected by police violence included in the work we’re doing.”

Both Rivera and Banat agreed that the commission will benefit from more meetings focused on its recommendations for the city.

“We’ll see what comes out of those meetings next week.” Banat said. “It’s been a long process. Folks showing up to our town halls have helped us really push through these recommendations.”

Later in the public meeting that Macalester and ISAIAH hosted, Mayor Melvin Carter spoke about his own experiences with the commission to improve public safety in Saint Paul.

Carter told of his experience as a Black teenager with a father as a police officer. Carter’s father continually had to process his own son’s license plates during repetitive traffic stops by other officers. The Mayor was given the nickname “hot potato” because he was pulled over so often.

“We can’t afford any more to try to segregate our public safety strategy from everything else.” Carter said. “I think maybe the most impactful thing that we’ve done on public safety has been raising the minimum wage.”

Carter said that policing has taken an incomplete approach to public safety.

“The truth is, you can’t have safety without having security,” Carter said. “We try to prioritize safety without first making sure that our community members have basic access to those basic physiological needs.”

On Monday, Carter addressed policing again in a press conference following the police shooting in Brooklyn Center. Carter said that the state needs to increase protection of its citizens in police custody.

“We have to ask ourselves questions like why do we even have tasers that operate and function and feel and deploy exactly like a firearm?” Carter said at the press conference.

In the midst of renewed protests against police violence, Saint Paul’s commission will have its final town hall on Saturday April 7 from 2-4 p.m. Macalester will be hosting other government officials and representatives in the coming weeks about mutual aid organizing during protests.