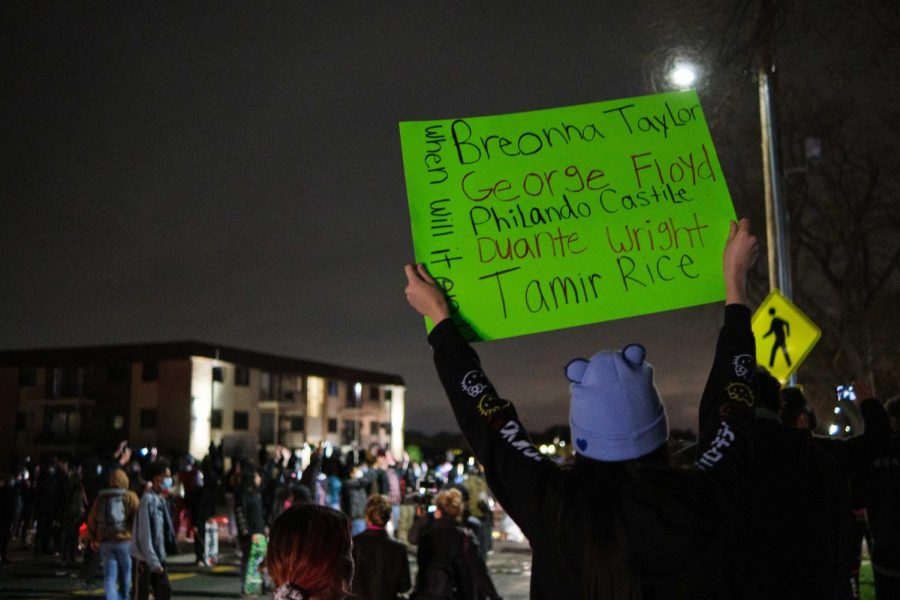 A protester holds a sign at the Brooklyn Center Police Department on Sunday, April 11. Photo by Kori Suzuki '21.

On Sunday, April 11, a Brooklyn Center police officer shot and killed Daunte Wright, a 20-year-old Black man, after a traffic stop. In the following hours, officers in riot gear deployed tear gas, flashbangs and rubber bullets as hundreds of people surged into the streets across the Twin Cities suburb to protest the shooting.

Wright’s death at the hands of Brooklyn Center police came as the trial of Derek Chauvin, the former Minneapolis police officer charged with murder in the killing of George Floyd, entered its third week.

Body camera footage of the shooting, released at a press conference by the Brooklyn Center Police Department on Monday, April 12, shows two officers attempting to handcuff Wright outside his car. Wright tries to get back inside the driver’s seat, and one of the officers draws their weapon and shoots Wright.

The name of the officer who shot Wright has not yet been released.

Early Sunday evening, hundreds of people gathered at the intersection of 63rd Avenue North and Lee Avenue, several blocks from where the shooting took place. Wright’s mother, Katie Wright, said her son called her as he was pulled over and told her police had stopped him because of an air freshener dangling from his rearview mirror.

In a video posted on Twitter by KARE 11 reporter Chris Hrapsky, Katie Wright describes hearing the traffic stop over the phone. She said she heard an officer order her son to get out of the car, then tell him not to run. She said the call was disconnected and when she called back, Daunte’s girlfriend answered. One of the officers had shot Daunte.

For hours, people continued to gather in a quiet, somber circle at the intersection of 63rd and Lee where a chalk memorial read “Justice for Daunte Wright.” Among them were well-known local organizers like civil rights lawyer Nekima Levy-Armstrong, musician Toussaint Morrison and organizer DJ Hooker.

“They killed Floyd, and then they killed Dolal Idd literally blocks down the street,” Hooker said. “No remorse. They’re still putting their knees on people’s necks. They’re learning absolutely nothing.”

As the evening drew on, hundreds gathered in the Brooklyn Center Police Department parking lot. Residents watched from apartments as protestors demanding justice for Daunte Wright faced off against dozens of police officers in riot gear.

At 9:33pm, Brooklyn Center police officers warned protestors that they had declared an unlawful assembly and ordered everyone to leave the area within 10 minutes. Within minutes, officers moved forward, pushing protestors and bystanders out of the parking lot and into the street.

Over the next several hours, officers fired tear gas, rubber bullets and flash-bang grenades at the crowd and at residential buildings across the street.

The shooting happened the same afternoon that Families Supporting Families Against Police Violence and other advocacy groups held a rally in Saint Paul to remember other victims of police violence.

At a noon press conference on Monday, Brooklyn Center Police Chief Tim Gannon said the officer who shot Daunte Wright may have meant to use their Taser. Gannon said he believed “the officer had their intention to deploy the Taser but instead shot Mr. Wright with a single bullet,” calling it an “accidental discharge.”

This is a developing story. Check back for updates. Editor-in-chief Malcolm Cooke ’21 contributed to the reporting of this story.