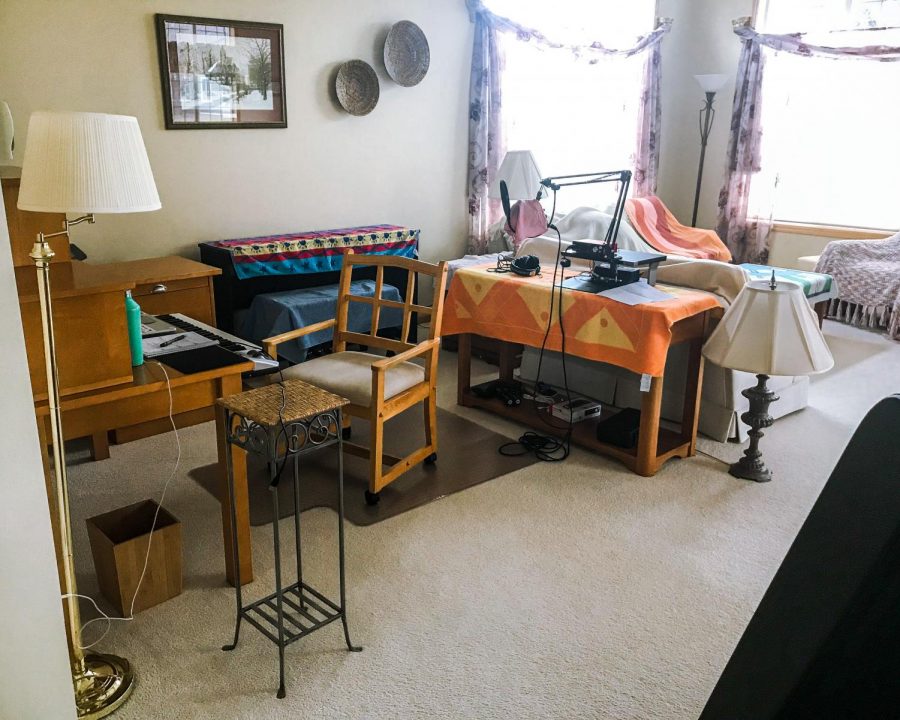 A makeshift recording studio Cogen set up at her grandmother’s house in November. Photo by Milly Cogen ’21.

This time last year, Milly Cogen ’21 was an environmental studies major planning her senior internship experience — fast forward a few months, and she was suddenly a music major, composing, performing on and producing her own concept album.

“I don’t like saying that the pandemic made me change major tracks,” Cogen said. “Instead, I frame it as: I’m driven by doing what I really think would help me, and being able to be flexible about what’s serving me in the current moment. For me, it was making an album during the pandemic.”

When Macalester announced its switch to the module system for the 2020-21 academic year, departments were forced to alter their course schedules, and Cogen’s path to graduation shifted. Frustrated with the changes she would have to make to her planned major schedule, she was drawn to the music minor that she declared during her first year.

“Obviously, none of us knew this pandemic was going to last for a whole year,” Cogen explained, “but I was thinking, ‘In the fall, if I have to be locked in my room doing my undergrad, what can I actually do from my room?’ And then I was like, ‘Maybe you should tap into that little sparkly thought you’ve had this whole time: you should be a music major.’”

After a call with her advisor, music professor Victoria Malawey, the plan was set.

Cogen previously avoided declaring a music major with the capstone experience in mind; usually, the major culminates with a senior recital carefully curated throughout a student’s senior year, which she was not interested in taking on. In the standard semester system with an in-person structure, she was content with her music minor and commitment to the concert choir. With the pandemic’s restrictions on performance and gatherings, however, Cogen saw an opening to approach a recorded capstone creatively. She dedicated this academic year to creating an album of original music, which is currently titled “What Does It Mean to Grow?”

Cogen’s primary instrument is her voice and about half of the album is a cappella. Since she started song-writing two years ago, vocal arrangements have been the most intuitive type of music for Cogen to compose.

“For a long time, I would just record things onto my phone in a little looper app, B-Box Looper. The sound quality is garbage, but I would just record into that over and over again to come up with ideas. Those ideas are some of the things I’m incorporating into this album — even some that are like two years old — or they’re things that inspired other things to be written.”

The other half of Cogen’s eight-track album varies. One song was recorded during her semester abroad in Stockholm, Sweden, last fall; it was produced by someone else and has what she calls a “fuller” sound with more instruments. Another comes straight from B-Box Looper as an homage to where she got her start — despite the app’s “garbage” quality.

Another track is a cover of Maggie Rogers’ “Alaska,” and features Cogen’s boyfriend on the drums. To record it, the pair went to visiting professor Reid Kruger’s home studio, another learning experience for Cogen.

“Now I know a little more about recording drums, even though I don’t play drums at all,” she laughed.

The last track is more personal, with a focus on Cogen’s skills on the piano.

“As a tribute to the classical training that I grew up with, I scored a poem that my friend wrote for a single voice and piano,” Cogen said.

“Normally, all of my songs have me singing in like, five different lines. It’s a quintet of Milly,” she added. “I wrote this song to have an actual emphasis on the piano, and just a single vocal line that I’m going to sing, not too much harmonizing. That’s going to be a deviation from the rest of the style.”

The plan for “What Does It Mean to Grow?” — the title for which came from another B-Box Looper composition — was always a seven- to nine-track album. Apart from that, Cogen’s creative process has come in ebbs and flows. She has a half-hour lesson with a voice teacher each week, as well as a half-hour lesson with a production teacher and frequent check-ins with Malawey to keep her on track. As a result, her album now includes six “quarantunes” that were composed this year. She has mostly recorded these tracks in the electronic music studio in the Janet Wallace Fine Arts Center — which, as she learned the hard way, is not entirely soundproof.

“Sometimes it’s just like, ‘Well, the atrium did not ask for me to sing the same line six times today, but apparently they’re gonna get it,’” she laughed.

Cogen also had the opportunity to set up a homemade recording studio for herself at her grandmother’s house the week after Thanksgiving, where she went to self-isolate from her housemates who traveled out-of-state for the holiday. She had the house to herself to really focus on honing her craft, which was another fun learning experience for her.

Despite the world being in flux this year, and her creative process still being mostly solitary, Cogen has found the year-long capstone grounding while watching other seniors’ projects condense into modules. She is also lucky enough to work in-person at the Digital Resource Center, a position she has held since her first year. Recording this album has been a challenge, but she definitely sees it as the right choice for her COVID senior year.

“The biggest piece of advice that I’ve gotten — which my vocal teacher and my production teacher both told me on the same day — is, don’t run yourself ragged with this project by trying to do so many new things because you’re like, ‘This is what an album is supposed to sound like,’” Cogen said. “It’s just a capstone. It’s the end cap of a process. It needs to reflect what you’ve done, and your skillset.”

In lieu of the typical ‘Seniors In Recital’ event for music majors during Senior Week, each major has been instructed to upload their finished capstones to a Google Drive folder. Even though she is relatively new to the major, Cogen is hoping for a more collaborative way to close out her undergraduate experience with her fellow majors. Until she hears more, though, that Google Drive folder is her next goal.

“People are asking me, ‘When are you going to release your album?’” she said. “My answer is, that’s a summer problem. Right now I’m just focused on finishing it.”

Cogen plans to upload “What Does It Mean to Grow?” on streaming platforms in the summer following graduation. Until then, she’ll be playing with B-Box Looper and serenading the Janet Wallace atrium with “quarantunes.”