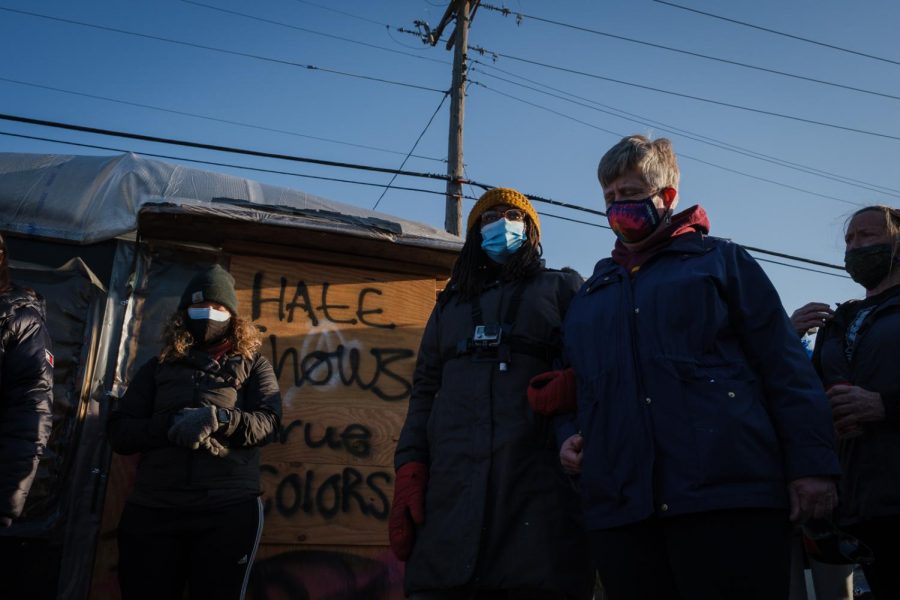 Please be advised: this story contains a description of the police killing of George Floyd in Minneapolis.

Monday, March 29 marked the first day of testimony in the trial of Derek Chauvin, the former police officer charged in the death of George Floyd. Several witnesses for the prosecution testified early in the week, including a police dispatcher, nearby store attendants and bystanders who videotaped the incident and attempted to intervene.

Later in the week, on Thursday, April 1, medical professionals and officers who witnessed or participated in the incident of Floyd’s death testified about the defendant’s actions and the legal procedure after a civilian dies in police custody.

Chauvin was fired from the Minneapolis Police Department after he kneeled on Floyd’s neck for more than eight minutes ten months ago on May 25, 2020, killing Floyd. Chauvin is charged with second-degree murder, second-degree manslaughter and third-degree murder.

The trial is taking place in the Hennepin County Government Center, which is currently surrounded by two levels of fencing with concertina wire between them. Before court opened Monday morning, members of Floyd’s family and lawyers linked arms and knelt down in front of the courthouse in silence. Activists held protests outside the center’s plaza throughout the day on Monday and into the following days.

The trial is being broadcast live, which is unprecedented in Minnesota. Hennepin County District Judge Peter Cahill, who is overseeing the trial, made this ruling last November.

The state finished jury selection last week, with nine women and six men on the jury, two of them alternates.

Defense attorney Eric Nelson opened his arguments Monday by stating that the social activism symbol that Floyd has become is not part of courtroom procedure on whether the defendant is guilty. Nelson argued that Chauvin was doing his job according to his training.

Nelson also said Floyd had taken opioids and methamphetamines before he was detained, and that his death was caused by drug use, not police violence.

“Evidence will show that Mr. Floyd died of a cardiac arrhythmia brought on by hypertension,” Nelson said in his opening statement Monday.

The prosecution includes Minnesota Association of Black Lawyers’ corporate lawyer Jerry Blackwell, who delivered opening statements on Monday. Matthew Frank, the primary questioner, is a state prosecutor and former public defender who leads the attorney general’s criminal division. Steve Schleicher, a former longtime federal prosecutor, was chief of the St. Paul branch of the U.S. Attorney’s Office. Minnesota Attorney General Keith Ellison is also taking part in the prosecution, but is not taking a visible roll in the trial.

Blackwell opened by arguing that Chauvin had taken actions outside the bounds of his job when he kept his knee on Floyd’s neck for almost nine minutes, claiming Chauvin used excessive and unreasonable force even after paramedics arrived.

“It was homicide, it was murder,” Blackwell said. “This was not a heart attack.”

On Thursday, Floyd’s girlfriend, the two paramedics and a firefighter that responded to the scene all testified. Questioning focused on the types of CPR care that were administered.

Chauvin told his supervisor after the incident that Floyd had suffered a “medical emergency” and then turned off his camera in the private conversation, shown to the court in a video Thursday. The police officers called into the police station a “code 2,” which is an immediate risk of serious injury to a person or damage to property. The police officers did not administer emergency care at the time.

The paramedics thought Floyd was dead when they arrived at the scene. A police officer went with the ambulance and started performing chest compressions on Floyd in the vehicle, as police camera footage showed. Firefighter Jeremy Norton testified that they used a LUCAS device to mechanically administer chest compressions.

Norton testified that he notified his department about the incident because a civilian had died in police custody and there was another off-duty firefighter, witness Genevieve Hansen, on the scene at the time of death.

Floyd’s girlfriend Courteney Ross testified that she did not know where Floyd was at the time of his death and that they both had a history of using opioids. Ross, like many others testifying previously, broke down crying on the stand.

Throughout the trial, the defense has asked the witnesses about the four cops’ conversations between each other and the bystanders, Chauvin’s position on Floyd’s neck and Floyd’s unresponsiveness.

Another theme of the defense’s questioning has been an attempt to show that the bystanders present at Floyd’s death were agitating the officers. Nelson pressed two witnesses in particular about their “anger.”

One of those witnesses was mixed-martial arts professional and security guard Donald Williams, who was on the scene when Floyd was killed.

“I did call the police on the police,” Williams testified. “Because I believed I witnessed a murder.”

Nelson asked Williams about his use of strong language towards the officers during Floyd’s death, verifying that he called Chauvin a “bum,” “bogus,” and a  “bitch,” among other words.

“Yes, because I wasn’t being heard,” Williams said.

Williams declined to accept Nelson’s suggestion that his words had been “angry” and had escalated throughout the incident.

“They became more and more pleading for life,” Williams said. “I was a professional. I stayed in my body.”

Nelson pursued a similar line of questioning in his cross-examination of Minneapolis firefighter Genevieve Hansen, who was at the scene of Floyd’s death and testified that the police had prevented her and others from offering medical assistance.

Hansen testified that she was “upset” by the situation but not made “angry,” as Nelson suggested.

Several witnesses, including Hansen, broke down crying on the stand. The prosecution asked several witnesses why they were upset, and several responded that it was because they were unable to intervene when the police officers were harming Floyd.

Several minors who witnessed Floyd’s killing also testified on Tuesday, and many said they could have intervened. Darnella Frazier took the video that went viral of Chauvin kneeling on Floyd’s neck and testified this week.

“I was sad and kind of mad,” Reynolds said in her testimony.

The defense did not cross-examine her and she was not shown on screen because of her age.

On Wednesday, the jury viewed the body camera footage from all officers involved. The footage showed the full encounter between Floyd and the police, beginning with officers ordering Floyd to get out of his car at gunpoint. Footage showed the officers speaking to each other about Floyd’s state, assuming he was on drugs as he appeared to be foaming at the mouth. Officers handcuffed Floyd, who resisted getting in the cop car, explaining he was claustrophobic and had COVID-19.

Police officers who were present at the scene, Thomas Lane, Alexander Kueng and Tou Thao will be tried on August 23 after having pled not guilty to aiding and abetting second-degree murder and manslaughter.

The trial of Derek Chauvin will adjourn for the weekend on Friday, April 2, after Minneapolis Police Chief Arradondo testifies. The trial will continue on Monday, April 5, and is expected to last another three weeks.