Way Back at Mac: A look at Mac football’s historic losing streak 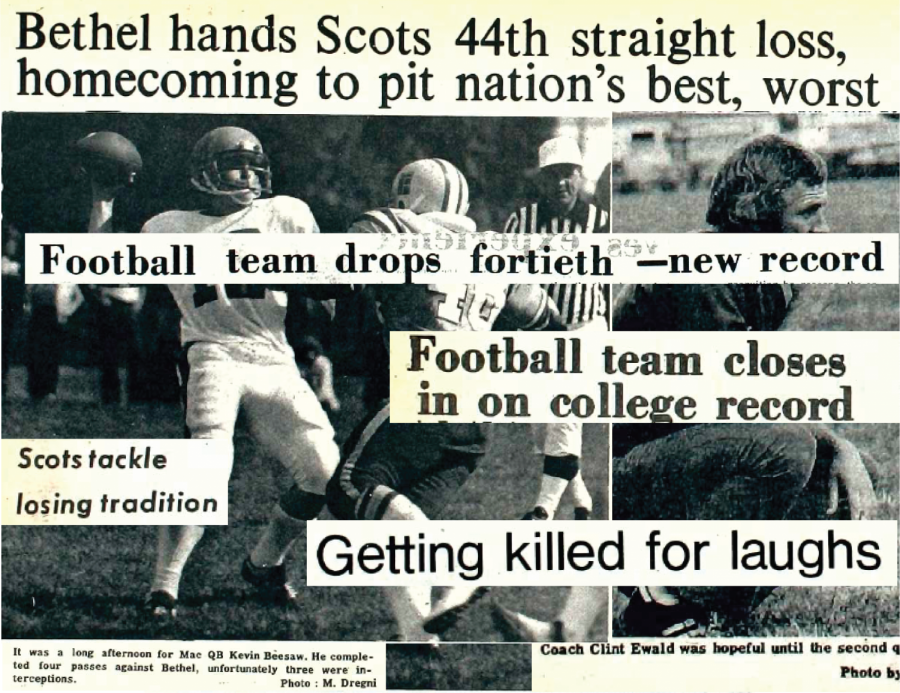 Way back at Mac. Graphic by Lily Denehy '22.

A few weeks ago, a student at Macalester shared a Sports Illustrated article from 1978 titled “The Scots Get Scotched,” on social media. This article covered the 1978 Macalester football team’s record-breaking losing streak — 41 games at that time. Sports Illustrated poked fun at the disinterest and outright heckling of the football team by Macalester students. They wrote that only 12 students traveled to see the team play at Hamline, and most who did spent the game playing backgammon.

Regardless of student disinterest, The Mac Weekly continued to cover the record-setting season. On Oct. 29, 1978, Macalester football set a new record for consecutive losses in the NCAA after a 44-0 loss to St. John’s University. Student spectators who were in attendance for the historic game held cards saying “Go Scots!” which they flipped over to say “Oh Shit!” when the other team scored. Ultimately, Macalester’s NCAA football record for the longest losing streak was 50 losses, finally ending during the 1980 season.

Our coverage praised Macalester’s “improving” defense while lamenting the lack of touchdowns. According to perennial sports writer Evert Fowle, the best example of Macalester’s growth on defense came during their game against St. Thomas where the Scots held the Tommies to just four touchdowns for a 28-0 loss. This is also evidenced by the St. John’s game; in 1977 Macalester lost to the Johnnies 70-0.

The streak’s auspicious beginning was in 1974. Though they beat Gustavus Adolphus 21-20 on Sept. 28, the next week the Scots dropped a close game to the University of Minnesota-Duluth, 6-0.

At that point The Mac Weekly and presumably the student body did not see the loss as a death knell to the football program. The same week the paper reported on the loss, they interviewed star safety and captain Larry Craig about the “upswing” of Macalester’s football team. However, football, and sports in general, were not Macalester’s core focus in the 1970s and Craig’s short but ranging interview speaks to this. He explains that he doesn’t “force the subject” of football on anyone and that he would not describe himself as a “jock” despite being one of the best players on the team.

Throughout 1974, Macalester’s team continued to put points on the board in hard-fought games, but ultimately lost each and every one. By 1975 the Weekly’s headlines stated “wins elude football players” and Macalester’s small fan base was excited when the team scored at all. One memorable 1975 game featured Macalester students littering the field with oranges after Macalester scored a touchdown against Hamline University. The students were “convinced that their team would be invited to the Orange Bowl on New Year’s Day,” according to an article written by Howie Sinker. The Scots went on to lose 23-14.

The streak continued in 1976. One sports writer at the Weekly discussed the Scots’ “losing tradition.” And new coach Clint Ewald said, “We may lose all our games next year, but at least we’ll do it well.” Throughout Ewald’s three-year tenure, Macalester lost every game.

1976 is also one of the first years where the possibility of abolishing the football program was floated in sports articles and columns in The Mac Weekly. In addition to their “losing tradition,” students were concerned about Macalester students being “needlessly hurt” as they played football for a perennially losing team. They argued that Macalester football players were students first, and pretending otherwise would lead to “serious injury.” Others focused more concretely on the financial benefits.

This was a predictable turn. Macalester was in financial trouble in the 1970s — so much that the college almost went under. At various points in the years 1972-74 the college did not have enough money to pay faculty salaries. In 1981, longtime donor and alumni DeWitt Wallace ’11 gifted 10 million shares of Reader’s Digest stock to the college. When the stock went public in 1990, the college’s endowment almost quintupled from $60 million to $325 million. With this crisis looming in the minds of students, recent alumni and faculty, it is no surprise that cutting the losing football team was on the table.

By 1978, there was continual discussion about disbanding the football team as the streak broke the NCAA record and a flood of national media descended on Macalester games. Proponents of the team argued that, at Macalester, academics came first, and rather than using the “student first, athlete second” argument as a reason to disband the team, this was in fact the best reason to keep it. Bernie Woodall’s letter to the editor in The Mac Weekly reads, “Prospective students turned off by the football-factory jock image of some colleges and universities will be attracted to Macalester College as students first and football players second.”

The student-first mindset continues to be one of Macalester’s key recruiting arguments. In the 1970s and today, however, the student-first image does not always live up to reality. This fall, in the midst of the first semester of the COVID-19 pandemic, Macalester first-year athletes were isolated from other students living in Kirk Hall and eating exclusively in the Leonard Center, while non-athletes live elsewhere and dine in Cafe Mac. This physical separation created a social divide between student athletes and non-athletes.

In the 1970s as well, students criticized elements of jock culture which sometimes surfaced at Macalester. One editorial in 1978 admonished unnamed members of the football team who bullied a non-athlete for their lack of interest in the football team. The editorial reads,  “Macalester is known as a non-jock school,” but its writer adds that Macalester has room for both jocks and non-jocks.

Though there were only a few “die-hard” Macalester football fans throughout most of the 1970s, students came in droves when it seemed the Scots would break the streak. They carried on with the familiar losing chants and goofy antics, but most were there to “see history.” They did. Macalester beat Mount Senario College 17-14 in 1980 to snap a record 50 game losing streak. As Macalester President John B. Davis said, “It was a perfect climactic end, like the kind you read about in a fairytale.”