Elona Street-Stewart to give 2021 commencement speech 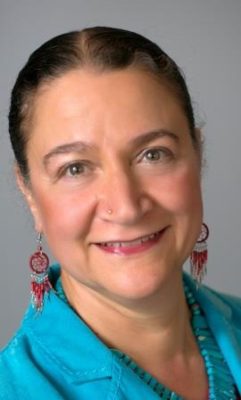 President Suzanne Rivera invited Street-Stewart to give the address after meeting her and learning about her work on racial and social justice. Street-Stewart has worked within the synod as an associate for racial ethnic ministries and community empowerment. According to Rivera, Street-Stewart is a social justice advocate who speaks powerfully about antiracism work in particular.

“She’s a trailblazer as a woman leader and as a Native woman,” Rivera said. “When I learned about her story and her inspirational leadership and all that she had accomplished… I was inspired, and I thought our graduating class would be inspired also.”

Rivera also chose Street-Stewart as a nod to Macalester’s historical connection to the Presbyterian Church. Macalester’s founders started the College as a Presbyterian school, with the Synod providing funding and land to the College. Even though Macalester continues to be part of two Presbyterian college associations, the school maintains a less formal relationship with the Church and is not a religious college.

Street-Stewart also has a personal connection to Macalester — her child is a member of the class of 1999.

Street-Stewart will speak in the virtual portion of the graduation ceremony, held via Zoom and Facebook at noon on May 15. In lieu of the traditional in-person ceremony and walk across the stage, the virtual event will be accompanied by two in-person grad walks for seniors and limited guests.

“All year long we’ve been asking students to be flexible and to be willing to change approaches as we have followed the science, and we really felt like…  the administration also should demonstrate flexibility,” Rivera said. “I’m really pleased that we’re going to have some in-person gathering.”

With vaccine appointments now open to all Minnesotans over the age of 16 and Macalester planning to reopen campus next fall, a shift in the pandemic seems to be on the horizon. Rivera said her hope is to close out this last year of loss with a ceremony that reflects some hope and excitement.

“We’re really looking to the commencement ceremony as an opportunity to restore some joy and to celebrate accomplishments, and to really send the class of 2021 off into a future that is looking really promising,” Rivera said.