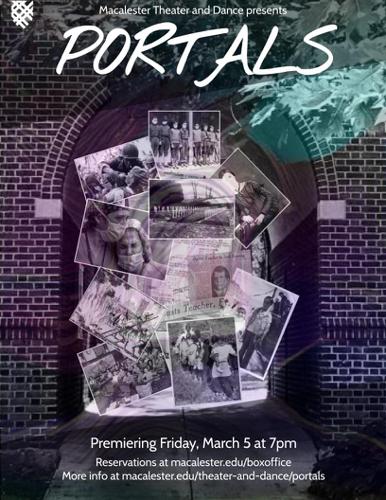 On Friday, March 5, the Theater and Dance Department presented “Portals,” a collection of filmed performances that borrowed from the past to make sense of the present. Associate Theater Professor and the production’s director Beth Cleary was inspired by Arundhati Roy’s April 2020 essay “The Pandemic is a Portal” for the production’s theme.

In the “Director’s Notes” section of the program, Cleary quotes Roy’s essay by stating that the pandemic and lockdown have “suddenly illuminated hidden things.” Cleary positioned “Portals” within this idea by writing: “art is a torch for illuminating the hidden things, for passing through and beyond this portal together.”

The series of monologues captured the essences of characters such as a doctor who lived through the 1918 influenza pandemic, a teacher accused of communism during the Red Scare, an Anabaptist martyr, a Vietnam war veteran, a Spanish-speaking storyteller named Amparo and a nurse working in a COVID-19 unit. Other performances included a letter to the poet Emily Dickinson, a compilation of poems and spoken words entitled “Dear Black Girl” and a personal reflection of the past year after losing a parent. With each performance, viewers were invited to find ways to connect the emotional truths behind these stories to their individual and collective experiences during the COVID-19 pandemic.

“Everything stopped. There were no club meetings, social gatherings of any kind,” Fleta Woolsey, the first role played by Jones, said of the 1918 influenza pandemic.

“Emily, how do you pass the days staring at the walls and waiting for the words to come? I am exhausted of writing only out of anger and sadness. How do you find joy in the sickness and darkness?” Morris asked Emily Dickinson.

Thirty minutes before the “Portals” premiere on Youtube, there was a pre-premiere concert by Dameun Strange ’95, the production’s composer. His compositions accompanied the transitions between each performance piece. These transitions consisted of a solemn, moving black-and-white profile shot of each performer and a brief description of who they were portraying. These images were shown inside the “portal,” which was a photo of the opening of an arch at Kirk Hall. This portal was recreated as the background for most of the performances.

“Portals” was the department’s second production since the start of the COVID-19 pandemic. The department’s production of Shakespeare’s “Twelfth Night” and twice annual dance concert were cancelled last spring due to the pandemic. In November 2020, the department came back with “Perspectives.” That production was an experimental set of filmed performances that reflected on the performers’ lives under quarantine and explored the possibilities of green screens and special effects in theater. “Portals” is a tightly woven concept that effortlessly evoked the trials and frustrations of this past year through both historical and personal narratives. While many of the pieces in “Perspectives” were filmed in the performers’ respective houses and bedrooms, almost all of the performances in “Portals” were filmed in the Black Box, located downstairs in the theater and dance building.

The opening “Portals” livestream had over 60 viewers. The video of the production remained available for viewing through March 7. After the premiere, about 30 people joined the post-show conversation via Zoom, which was facilitated by theater professor and Associate Dean for the Kofi Annan Institute for Global Citizenship Harry Waters Jr. Instead of a traditional Q&A, the post-show conversation was a more interactive experience with participants being sent into breakout rooms to discuss what brought them to this event and how they interpreted “story” as a concept.

In my breakout room were Jones, Milon and Marciano Silva dos Santos, a visiting guest artist in the theater and dance department. It was in this breakout session where I learned that Jones’ performance of the nurse was inspired by a December 2020 Washington Post article about the experiences of seven ICU nurses working with COVID-19 patients.

Silva dos Santos asked Milon how she approached balancing the personal story of her performance about losing her mother with the “craft” of acting.

“To me, I just tried to focus on speaking as much from myself as I could because I knew that if I tried to do it any other way, if I tried to come at it from a solely ‘acting theory’ [perspective]… it’s not going to sound authentic,” Milon answered.

This made Jones reflect on why they decided against going into their family history like they had originally intended. Jones even had a book of interviews with their grandmother that they were going to work with.

“But then I was like, you know what, I’m just going to put that wall up, and I wanna do something where I can focus on acting and the craft of picking someone else’s words and position and putting it out there authentically as possible,” Jones said. “That’s what I challenged myself to do, but [both approaches are] so unique and challenging.”

After the small group discussions, everyone was brought back into the main Zoom room and asked to share what each group had talked about. The post-show conversation concluded with a few words from Cleary and a final note from Waters.

“Our stories are the things that really link us together… Researching stories, that’s very powerful because you’re bringing the past into the present.” Waters said. “There’s somebody watching you, we don’t know who they are, you don’t know who they are, but they’re watching how you do your truth and how you bring your full self into every moment, and that’s the inspiration that they’re going to be taking when, hopefully, they’ll be telling your stories.”