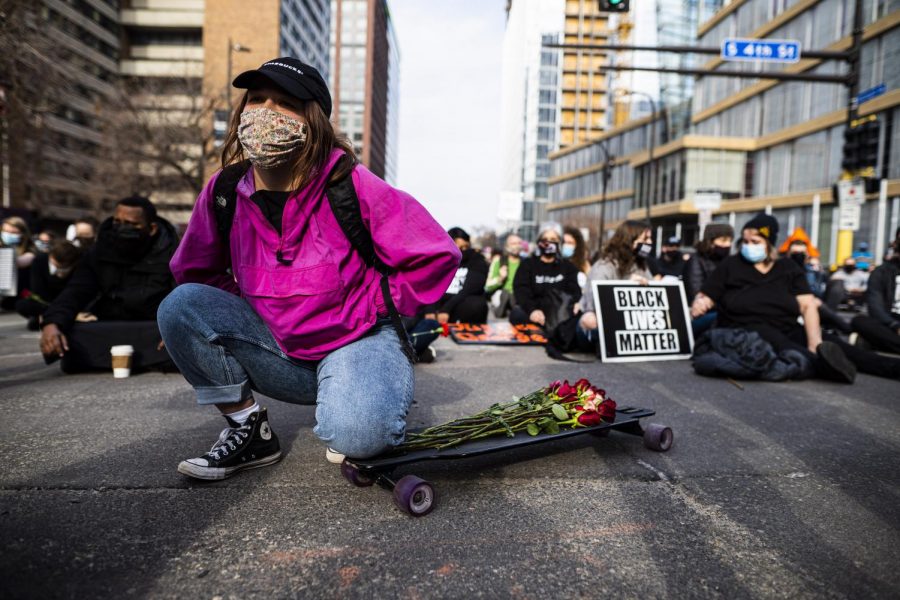 Protesters sit in a moment of silence to honor George Floyd. Photo by Celia Johnson '22.

For the next several weeks, former Minneapolis police officer Derek Chauvin will face trial for charges of murder of George Floyd on May 25, 2020. This article is the second installment of The Mac Weekly’s weekly updates on the trial and the conversations it will spark at Macalester and across the Twin Cities.

After several weeks of questioning, 15 jurors have been selected to serve on the trial jury that will determine the fate of former Minneapolis police officer Derek Chauvin. With opening statements beginning Monday, the high-profile trial is expected to last several weeks. Jurors will vote to convict or acquit Chauvin on three possible charges: second-degree manslaughter, second-degree murder and third-degree murder.

While the jurors’ identities will remain anonymous throughout the trial to protect their safety, we know that the jury is more racially diverse than the city of Minneapolis, including six people of color and nine white people. Of the people of color, four are Black and two are multiracial. Nine of the jurors are women and six are men. The jury also skews relatively young, with four jurors in their 20s, three in their 30s, three in their 40s, four in their 50s and one in their 60s.

The jury selection process works as follows: Judge Peter Cahill can dismiss prospective jurors, and attorneys for the defense and for prosecution can motion for the judge to dismiss jurors if they believe the juror shows unacceptable bias. Attorneys can also use “peremptory” strikes without specifying the reason – although under the law, they cannot dismiss jurors solely because of their race.

Complicating the jury selection was the  March 12 announcement of the $27 million settlement the city of Minneapolis will pay George Floyd’s family to settle a civil lawsuit over his killing. Judge Peter Cahill dismissed two jurors from the case after they said that they could no longer be impartial after learning about the settlement.

Judge Cahill expressed frustration with the timing of the announcement, describing it as an “unfortunate broadcast of certain details.”

Andrew Gordon ’05, Deputy Director for Community Legal Services at The Legal Rights Center, concurred with Cahill that the timing of the announcement was poorly timed with the criminal case’s proceedings.

“[The court is] looking for people who don’t have strong opinions,” Gordon said. “But the settlement was always going to cause folks to have a strong reaction, much like the video should have caused.”

“The City of Minneapolis says that we’re on the hook for $27 million because one of our police officers murdered one of our residents,” Gordon said. “That is a statement in and of itself.”

Judge Cahill and attorneys from the prosecution and defense conducted several rounds of questioning to determine jurors’ knowledge and views of the case, with the central question being whether or not they can set aside any personal biases in order to consider only the evidence presented at the trial.

To racial justice advocates, being able to ‘set aside personal biases’ in a case like the Chauvin trial often means excluding people who have experienced police discrimination first-hand and/or are personally affected by Floyd’s killing and its aftermath.

And although the makeup of the jury is racially diverse, former Hennepin County Chief Public Defender Mary Moriarty ’86 cautions against assuming that the jury’s racial makeup will necessarily lead to a conviction. In particular, she noted that two of the four Black jurors are immigrants, which could distinguish their views on policing from the views of many Black Americans.

“A lot of people immigrate from countries where police can just “disappear” them,” Moriarty said. “They have no rights whatsoever… and they’re extremely appreciative of what they have here and can sometimes be less critical of police.”

“I’m saying this generally because, of course, that’s not true across the board, but it is different to have four African-Americans on the panel than it is to have two African-Americans and two [Africans] who immigrated here,” Moriarty added.

Moriarty also noted that the public knows nothing more about the identities of the multiracial jurors beyond the fact that they have a mixed-race identity.

The dismissal of a certain juror, a Black man only known as juror #76, in particular raised questions of race and impartiality. Juror #76 noted that he lived near 38th and Chicago, the site of Floyd’s killing which is now a square named in his honor, and questioned why police so often kill Black men with impunity.

“As a Black man, you see a lot of Black people get killed and no one’s held accountable for it and you wonder why or what was the decisions, and so with this, maybe I’ll be in the room to know why,” Juror #76 said in court.

To Moriarty and Gordon, Juror #76’s dismissal is evidence of the ways in which people with personal experiences with racism and negative experiences with police are systematically excluded from jury duty in cases where race, policing and justice are intertwined.

When asked what a just outcome, if any, of the Chauvin trial could look like, both Moriarty and Gordon said that much more than just Chauvin’s conviction is needed to achieve justice for George Floyd.

“We saw Derek Chauvin treat George Floyd as if he was something less than human,” Gordon said. “I think if a fair jury works to apply the facts of this case.. the conclusion should be straightforward and that conclusion should result in some form of conviction.”

“[But] conviction in and of itself is not justice,” he added.

True justice for George Floyd involves scrutiny and ultimate overhaul of the system that led to Floyd’s death in the first place, they said.

“Justice for George Floyd…  in my mind is: what kind of systemic changes can we make that will ensure this will never happen to anyone again?” Moriarty said.

“We can get to the truth of this particular interaction,” Gordon said. “But that doesn’t change the interactions that are still occurring on the street. And until we can truly grapple with and examine the systemic issues that led to George Floyd’s murder, we’re never going to get to justice, even if a conviction is a step in the right direction.”