Minneapolis, Macalester prepare for the trial of Derek Chauvin 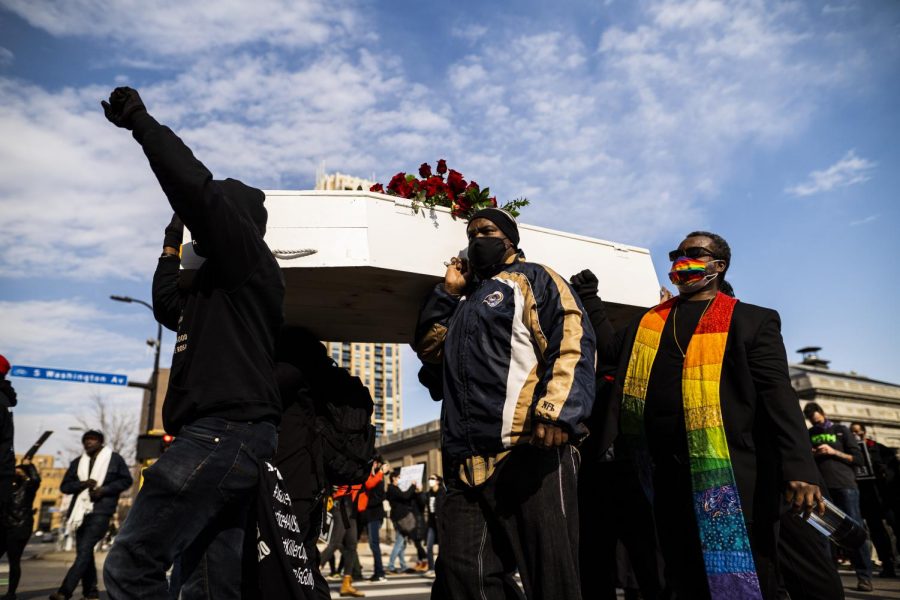 For the next several weeks, former Minneapolis police officer Derek Chauvin will face trial for charges of murder of George Floyd on May 25, 2020. This article is the first installment of The Mac Weekly’s weekly updates on the trial and the conversations it will spark at Macalester and across the Twin Cities.

Over eight months since George Floyd was killed, the trial of former Minneapolis police officer Derek Chauvin began this week.

The Twin Cities have been bracing for the trial. Minneapolis Mayor Jacob Frey and Police Chief Medaria Arradondo have led the effort to fortify Minneapolis, installing new fencing around the Hennepin County Government Center and bringing in 1,100 officers from outside law enforcement agencies and 2,000 national guard soldiers.

Various anti-racism and anti-police violence organizations, and members of the Minneapolis city council, have criticized this preparation for its focus on policing and security over community outreach.

Protestors took to the streets of Minneapolis on Sunday, March 7, the day before the scheduled start of the trial. The Racial Justice Network and Communities United Against Police Brutality (CUAPB) led a silent march starting and ending outside the fenced-off government center. Marchers at the front of the crowd carried a white coffin and a long scroll bearing the names of over 470 people killed by law enforcement in Minnesota.

Midway through the march, leaders directed protesters to pause and sit on Hennepin Ave. for nine minutes of silence, reminiscent of the amount of time that Chauvin kept his knee on George Floyd’s neck last May. Michelle Gross, an organizer with CUAPB, broke the silence by reading out some of the names on the scroll.

“Five of the names on this scroll are the handiwork of Derek Chauvin,” Gross said before reading off names. “The city had four chances to stop Derek Chauvin before he put his knee on George Floyd’s neck, and they did nothing.”

Jury selection began on Tuesday, March 9, after a one-day delay as the Minnesota Court of Appeals considered whether the prosecution could reinstate a third-degree murder charge in addition to the higher charges of second-degree unintentional murder and manslaughter. As of Thursday, six jurors had been seated.

At Macalester, various departments and campus leaders have set aside spaces for community members in anticipation of the stress and anxiety that the trial and the news cycle surrounding it could bring, particularly Black students and students of color.

Several student-led initiatives seeking to provide support began in the last couple of weeks. [email protected] and the Black Liberation Affairs Committee (BLAC) are offering care packages to students with funding from Macalester College Student Government (MCSG). The packages are available for all students, with the intention to prioritize Black students; requests will be open for another week.

[email protected] is also putting together a vigil for George Floyd and other victims of police brutality on campus. The vigil will likely start with an opening ceremony around April 2, soon after the modified quiet period at the beginning of module 4. After that, student organizers plan to leave it up through the end of the trial, where it will serve as a place for Macalester community members to gather and leave cards, flowers and art.

Student leaders have been discussing the possibility of a vigil since last summer — now that more students are on campus and the trial is starting, MCSG president and [email protected] organizer Fatiya Kedir ’21 said this felt like the right time to do it.

“We were really scared of bringing back trauma that a lot of us felt over the summer,” Kedir said. “There’s no way we forgot about what happened over the summer, but the trial’s just a bigger reminder. There’s so much instability and insecurity about if the justice system will actually follow through.”

The vigil’s organizers plan to put out a call in the next weeks for input on art from Black students and students of color. Kedir said that organizers want to compensate students who pitch in for their work; on Sunday, the group’s Instagram account put out a request for donations and raises $1,000 in 24 hours.

Organizers hope to donate cards and art left at the vigil to George Floyd’s family.

“There’s definitely a need for healing space for us, but I think part of healing for so many people is giving back or feeling like they’re not helpless, which I feel like people definitely feel when the justice system and things that aren’t in our control,” Kedir said.

Other departments around campus are also offering resources to students for the coming weeks, compiled in Macalester’s resource list for the trial. Next week between Monday and Wednesday, the Office of Student Leadership and Engagement is setting up a space for art and reflection in the Campus Center, with the intention to show support for students of color. On Friday, March 19, the Department of Multicultural Life is hosting a program on mutual aid and direct action with Rahsaan Mahadeo and Duaba.

The Civic Engagement Center is keeping a list of resources, too, with an overview of the case and links to news updates as the trial unfolds.

Jury selection is expected to take three weeks, with testimony slated to start on March 29. A verdict in the trial is expected sometime in late April.

No verdict will bring an end to the debate that Floyd’s killing sparked in the Twin Cities and across the county last summer. Parallel to the conversation happening in the courtroom, activists on the ground are still grappling with broader questions over what justice, accountability and policing should look like. Minneapolis organizers are gathering signatures on a petition to get an initiative on this November’s ballot to replace the police department with a public safety agency.

The court proceedings surrounding Floyd won’t end with Chauvin’s trial, either. The other officers charged in Floyd’s murder, J Alexander Kueng, Thomas Lane and Tou Thao, will face a joint trial in August 2021.

With students — particularly Black students and students of color — facing ongoing debates, stress and trauma, Kedir said she hopes that this period at the beginning of the trial can serve to proactively build a caring and sustainable community.

“Creating spaces for those conversations to happen, and for it to not just always be right after a traumatic event, is really important to me… so if something bad does happen we can hold each other up,” Kedir said.