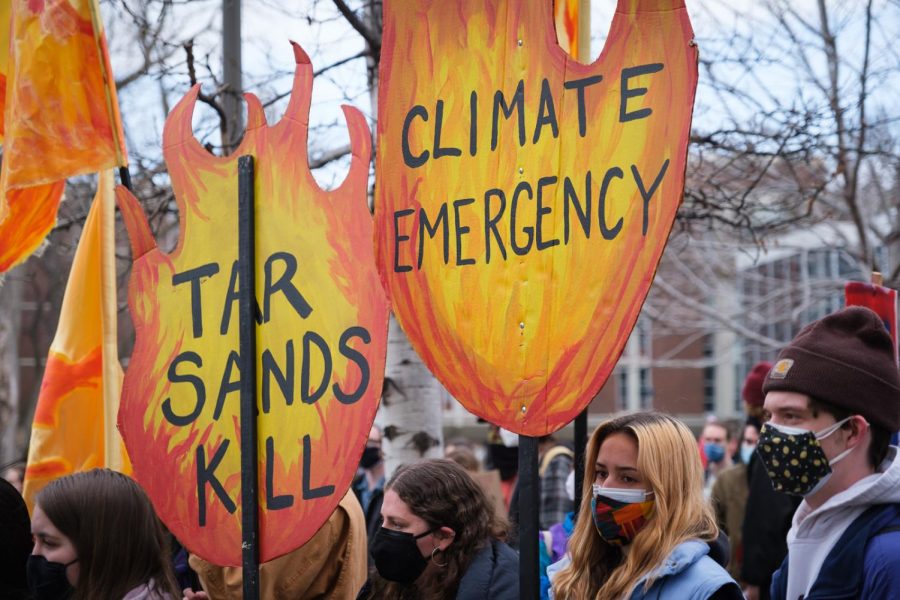 Student activists and members of the student divestment organization Fossil Free Mac (FFM) led hundreds of participants in a blockade of Grand Ave. on Friday, March 5, in the most openly contentious act of Macalester student activism in a decade.

The protesters called for an end to Macalester’s continued investment in Enbridge, the company currently constructing the Line 3 tar sands pipeline in northern Minnesota. Students organized the event in hopes to build momentum and urgency behind their petition to the Macalester Board of Trustees demanding divestment from Enbridge.

“Though institutions like Macalester funding Enbridge are not directly building the pipeline, their money enables Enbridge to continue to pollute the environment, destroy the Earth and oppress Indigenous peoples,” Betsy Foy ’22, a student involved in the frontline fight against Line 3, said. “Today, students across the nation are calling for divestment.”

Student organizers brought the focus to the broader fight beyond Macalester, too. A number of Macalester students have participated — and been arrested — in northern Minn. while protesting the construction of Line 3.

In November 2020, Enbridge secured the last of the permits for Line 3. Construction in Minnesota began in early December. Since then, Indigenous and youth-led actions in northern Minnesota have aimed to halt construction and draw national attention to the movement, pointing out the pipeline’s route through treaty lands, its potential environmental harm and the history of pipeline construction exacerbating the crisis of missing and murdered Indigenous people. On the political front, activists have filed numerous lawsuits and appealed to state and federal leaders including President Joe Biden.

“There are dozens of Mac students who’ve been arrested trying to work to stop the pipeline up north,” Quintin Grabowski ’22, who has spent time at resistance camps and rallies in northern Minn. this winter, said. “At the same time, Mac is literally making money off it. It’s incredibly hypocritical of them.”

Multiple speakers at Macalester’s rally encouraged students to participate in more resistance activities, both at Macalester and in northern Minnesota. Several Macalester students have been taking advantage of remote instruction to spend time up north on the front lines of the protests.

“Go up north, keep showing up,” Grace Jones ’22 told The Mac Weekly after the rally. “It is scary, especially when there’s actual real consequences to showing up in these things. No one wants to interact with the state like water protectors have to, that is really scary. But… there is nothing more rewarding and fun than showing up with people you care about.”

Macalester’s protest was a facet of a nationwide day of student action for divestment from Line 3. Seven other colleges and universities across Minnesota participated, including Carleton College, University of Minnesota-Twin Cities and St. Olaf College. These protests worked to call attention to each institution’s fossil fuel investments and the Indigenous-led frontline resistance movement in northern Minnesota.

At Macalester, the divestment movement has faced a plethora of blocks and stalled momentum. Several student speakers cited a lack of transparency and long bureaucratic processes as two factors that have bogged down the movement.

Vice President of the Black Liberation Affairs Committee (BLAC) Gabby Whitehurst ’23 noted in their speech that the administration did not share the full extent of Macalester’s fossil fuel investments.

“We have to be able to hold institutions accountable and we have to have open communication to do that,” they said. “How are we supposed to hold the school accountable if we don’t even know what the fuck they’re doing?”

Administrators have said that confidentiality agreements prevent them from sharing this information, although certain investments, including the public partnership with Enbridge, are disclosed on publicly available tax documents.

And while students spend time scrapping for information, the process for getting a divestment proposal to the board can take several months on top of that. The students behind the divestment proposal are demanding that the board review it immediately. According to the board’s policy, however, the college’s Social Responsibility Committee (SRC) must first lend its stamp of approval.

The newly convened SRC, chaired by environmental studies professor Roopali Phadke, plans to complete its review of the proposal by the end of the semester, after which the board will review the proposal. Jones said that’s not soon enough.

According to Enbridge’s timeline, pipeline construction will be nearing completion in May when the SRC hopes to finish its review of the proposal.

In an email to The Mac Weekly, President Suzanne Rivera affirmed students’ rights to express their views and advocate for issues which are important to them. She also expressed trust in the SRC’s review process.

“I look forward to the conclusion of the SRC’s review of the most recent FFM 2.0 divestment proposal.” Rivera wrote. “I have utmost confidence that the students, faculty, staff, and alumni members of that committee will do a great job.”

Amid the new push for divestment and activism around Line 3, student speakers took the chance to reflect on past social movements. Occupation and blockade are time-honored tactics for Macalester social movements, from Expanded Educational Opportunities (EEO) students’ occupation of 77 Mac in the 1970s to Kick Wells Fargo off Campus’ (KWOC) 2013 occupation of Weyerhaeuser Hall.

Speakers also highlighted a major Achilles’ heel for student movements: time. Each year, with experienced students graduating and new first years arriving, student activists are constantly in a battle against the clock as they try to reach their goal before they lose momentum or graduate. In that time, students said, the administration tends to wait out the activism and let the movement fizzle out on its own.

Speakers said they saw this happen last year, when the seven-year-long student divestment campaign ended with the Board of Trustees adopting an altered version of FFM’s original divestment proposal that altered the Board’s divestment guidelines without actually divesting from fossil fuels.

Jennings Mergenthal ’21 explained this pattern to the crowd of students, pointing out the common thread between KWOC, EEO and the divestment movement today.

“This is what Macalester does with student protests,” Mergenthal said. “The goal is to wait until the students who are protesting have graduated and bought into capitalism, or are ground into too fine a paste to do anything, and then maybe by that time the problem will have resolved itself or everyone will have forgotten about it… that’s what they hoped would happen in 2019.”

“By the time Fossil Free Mac figured out exactly what was going on, we were — you guessed it — either graduating or too burned out to keep going,” Jones said.

Reflecting on the earlier movement for divestment, students also spoke about their hopes to better connect with other movements for racial justice and human rights. Student speakers pointed to the Black Lives Matter movement and the movement for Palestinian liberation.

With the trial of Derek Chauvin beginning on Monday, March 8, student leaders emphasized the importance of showing up to Black Lives Matter protests in Minneapolis.

“The next step is to show face not just throughout the Line 3 movement, but in every other movement that’s going on right now,” Andrew Lee ’23, the host of the event, said. “If they don’t all fall together, then we’re going to keep running into these problems.”

The blockade of Grand Ave. wrapped up with a performance by the River Rats, a band led by Rhubarb Cuddy ’21, who has recently been living on the front lines of the fight against Line 3. The blockade went uninterrupted, with students blocking Grand Ave. at Macalester St. and Snelling. Macalester security and St. Paul Police stood by and passing cars honked in support.

Students sang protest songs and danced in the street before heading back to their homes and dorms. A number of student leaders set up a table outside the Ruth Stricker Dayton Campus Center where students could sign the divestment petition and get more information about future actions.

In a culmination of a rally that was both reflective and forward-facing, speakers called on Macalester’s underclassmen to resist the burnout that so frequently leads to the death of student movements.

“I’m a senior, I know I’m very tired and in a lot of pain right now… when I leave, will there still be people to pressure Macalester about this, or are you all going to forget?” Mergenthal asked. “I fucking hope you’re not gonna forget.”