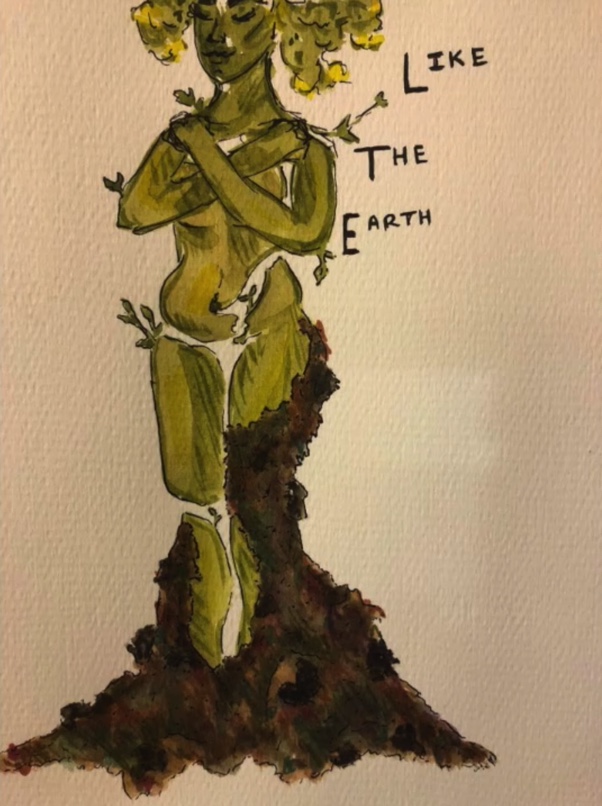 Gretta Marston-Lari ’21 has a lot on her plate with her new theater production, “Como la Tierra,” set to debut in late April at Macalester. Theatre and Dance (THDA) and Latin American Studies double major Marston-Lari wrote and is now directing and acting in the musical as her THDA Honors project.

“[‘Como la Tierra’ is] voicing something that doesn’t really exist in the world of theater at the moment, or in the world of musical theater mainstream.” she said about her cross-cultural Peruvian musical. “[We have] ‘In the Heights’, written by the god Lin-Manuel Miranda: that’s the musical theaters’ world of latinidad, what Latinx looks like right now.”

“This is trying to expand those visions of, ‘What does revolution look like in brown bodies?’ And then, ‘What does latinidad look like outside of the US?’” Marston-Lari added.

The entirely-original musical is based on real events from 2020 in Cocachacra, Peru, where there has been a serious mining controversy between the Tia Maria mining company and the locals that live in the Valle de Tambo. The message of Marston-Lari’s musical addresses this strife while also confronting discussions she has had in her own life about consent and sexuality. Marston-Lari finds parallels between the conflicts that occur between femininity and the earth.

The play has strong intersectional themes of feminism and environmentalism, and features parallels between the main character Juana Puyka and the Peruvian deity, Pachamama.

“There’s a legend that’s part of Andean cosmovision, and it says that Mother Earth comes to you in a dream as a woman: her name is Juana Puyka,” she said. “Juana is the name of the main character in this musical because I want her and her body to feel like, perhaps, a personified version of the trauma to the audience.”

“The reason that this musical is called ‘Como la Tierra’, or ‘like the earth,’ is that [the main character] Juana goes through a discovery where she’s trying to figure out if this land really is hers. And she arrives at the conclusion that the land isn’t hers, but it’s not because the land is theirs, it’s because the land is nobody’s,” Marston-Lari said.

“It’s wild. There’s a really fun song in the musical that is [about] the upper-class family — it’s super posh and it’s complete satire,” Marston-Lari said. “There are a variety of Peruvian sounds, because there’s a few genres that we’re working with.”

Marston-Lari said she added lyrics to melodies her own family created and adopted.

“I love coming up with melodies; my whole family is all musicians: my father writes music, my uncle writes music, and they already had a few melodies that I am obsessed with so I added lyrics to those. Five or six of the songs are original music from me.”

Marston-Lari agreed that “Como la Tierra” is a tragedy, comparing it in some ways to “Les Miserables” and Miranda’s “In the Heights.” Marston-Lari is playing Juana, and Marc Mutka ’22 is playing the villain, Salvador.

“Salvador in Spanish means savior, so he has a savior complex. Basically, [Salvador] has an arc… it’s the arc of an abusive relationship, and this is parallel to when the mining company essentially discovered there was metal in the valley. They entered without permission, they explored the land without consent and they decided that a project was happening without the approval of the community that it would affect.”

The inspiration for “Como la Tierra” came to Marston-Lari when she was studying away in Peru during the fall semester of her junior year. Marston-Lari is originally from Lima and moved to Florida when she was 14. Her independent study away program allowed her to travel all over the country to do research on the Tia Maria mining conflict.

“I was part of an Indigenous peoples program that traveled around Peru in Cusco, Arequipa, Puno and Quito,” she explained. “That was when my musical was born. I wrote the first draft in Spanish.”

“I decided to do my project on a conflict between the community of Valle de Tambo, the State and the mining company that was looking to create a project called el proyecto Tia Maria,” she added. “That was a conflict that had a lot of national attention; it was on the news a lot. And it was still happening when I was there.”

Marston-Lari did a lot of research about the issue, finding a lot of inspiration about the conflict from female academics in the process.

“I found a thesis that was written by a group of women at a university in Arequipa that was about the conflict, but specifically about women actors in the conflict,” Marston-Lari said. “I read the whole thing. I just had a dream one night when I was like, hurting the earth is akin to what hurting a woman is like, they are parallel. And so I wanted that to be the thesis of my musical.”

During her study abroad semester, Marston-Lari went to Arequipa alone and stayed with her family to research and write.

“I even tried to visit the conflict place but the roads were literally blocked because there were police,” she said. “It was insane.”

“[My research] was also conversations with my family and with people that think the mine is the best thing for the country and for the economy,” she added. “It’s very interesting — it has a lot to do with class, and it was important for me to recognize that that’s a part of my thinking, of my upbringing.”

Marston-Lari’s Peruvian experience has had a significant impact on her Macalester education as well.

“I came into Mac knowing that I was going to be a theater and dance major. I declared within the first week. I wanted to be political science but I realized in all the classes, all I really cared about was what was going on in Latin America. So then I became a Latin American Studies major. And those two things, those two interests have kind of run parallel to each other and most of the things that I do,” she explained.

In spring 2019, Marston-Lari participated in a collaborative theater piece, “currently untitled.”, where she and other Macalester students from underrepresented communities wrote monologues which they then directed and performed themselves.

“It was as a response to a lack of roles that address identity and bodies. It was all BIPOC and little bits of LGBTQ,” Marston-Lari explained.

Marston-Lari spent last summer as a student at the National Theater Institute (NTI) over Zoom. While she was attending virtually, she was recommended for the Miranda Family Fellowship, run by Lin-Manuel Miranda and his family. After Miranda’s “In the Heights” premiered at NTI in 2005, the Miranda Family Fund made a significant monetary contribution in 2017 to support scholarships for the institute’s rising students of color. Marston-Lari and her fellow students would have attended the 2020 Theatermakers Summer Intensive at the O’Neill Theater Center in Connecticut for seven weeks if not for the pandemic.

“I was in Minnesota all day in my room writing plays the whole summer,” Marston-Lari said. “We just wrote a musical in a week, so I wrote the beginnings of this play.”

“A few of us got selected to receive the Miranda fellowship. That was a nice surprise. It’s a two year fellowship and now I have the Miranda family as support and they’re connecting me to different theater-makers in the US,” she explained.

Marston-Lari said she felt a real connection with Lin-Manuel Miranda when they met virtually over the summer in the fellowship reading group.

“I asked him, ‘Have you ever started a project that you haven’t finished?’ and he was like, ‘Oh so many!’ and in that moment I felt the most validated I have ever felt because there are a million things I’ve started that I’ve never completed,” Marston-Lari said.

The 15-person performance of “Como la Tierra” is scheduled to take place outside on Shaw Field from April 23 through 25 or April 30 through May 2 depending on the weather. It is in conjunction with dance performances by students in the THDA department and another original play created by Asher de Forest ’21.

“It’s very much in shambles at the moment but it will come together,” Marston-Lari said.

Marston-Lari will be coming back from her home in Florida for Module 4 to hold in-person rehearsals.

“The department does not want to do a virtual performance which, honestly, I’m about. I said, ‘I’m sick of virtual anything.’ So, we’ll see what happens,” Marston-Lari said.

Back in Peru, the Tia Maria mining operation’s license was suspended after local protests in 2019 after ten years of protests. The future of the valley and mine is unclear as of 2021.

“The play ends before we find that out, but in real life, they’ve cancelled it for the moment,” she said. “That’s the resolution that we’ve arrived at, quite recently like a few months ago, but in the play, it ends with a confrontation between military entrance and the people of the community.”

Marston-Lari has a lot of options open for her future as an artist through the Miranda Fellowship. She’s applying for playwriting workshops as well as social work jobs on the coasts.

“[I have been applying to] things that have to do with immigration because I have experience with that,” Marston-Lari said.

When asked about what she has learned from Macalester, she said she didn’t think talking about social and environmental justice in class was good enough. What she liked were her real, hands-on experiences.

“Engaging with the local community and examining yourself. And yeah, I guess just being cognizant of your positionality when going into the work you want to do.”

Whatever the future has in store for the double major, Gretta Marston-Lari’s performance of “Como la Tierra” in April is sure to be engaging, internationally unique to latinx cultures and unparalleled throughout the Macalester community. Learn more about upcoming Macalester performances on the THDA website.