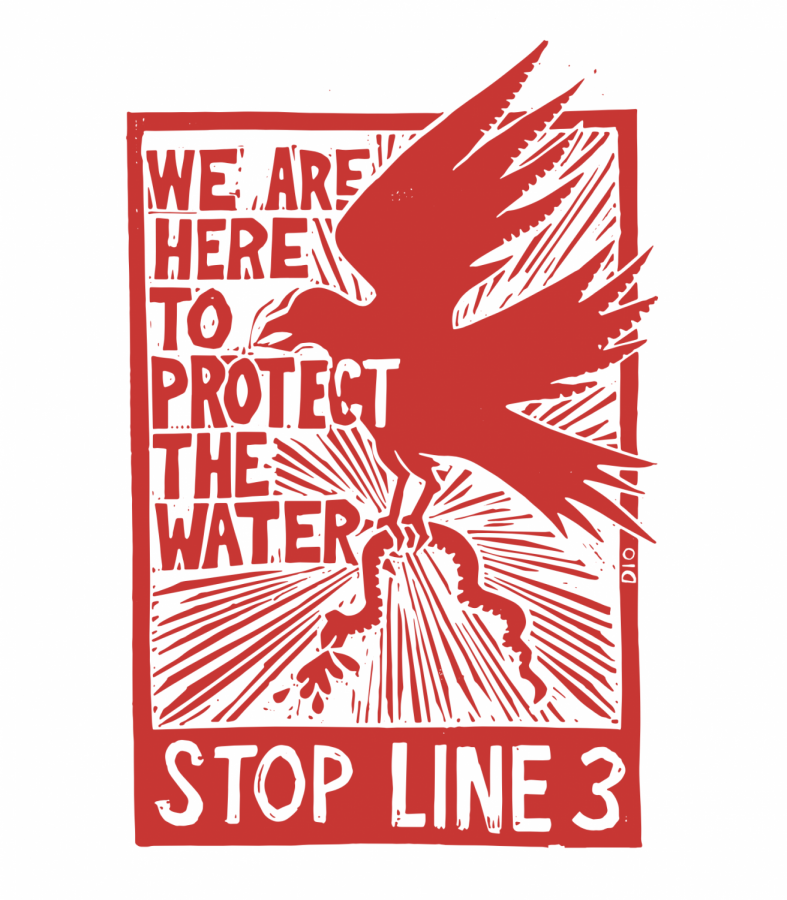 Members of the Macalester community have been using art and social media to protest Enbridge’s Line 3 fossil fuel pipeline through northern Minnesota by participating in MN350 and @Resist_Line_3’s virtual Art Storm last Wednesday. The Minnesota Court of Appeals denied the movement’s appeal to stop the construction of the pipeline in January, but frontline protests remain active, even during the recent record-breaking cold weather.

The Line 3 tar sands pipeline goes from Alberta, Canada to Superior, Wis., at the tip of Lake Superior. It will cross 227 bodies of water and cut through the Mississippi River’s headwaters twice. To support the Indigenous water protectors at the frontline protests northwest of Duluth, many Macalester students and alumni have been taking to Instagram and Facebook to educate and invigorate followers to support the #StopLine3 effort and get President Joe Biden’s attention.

The movement’s Instagram account @Resist_Line_3 has been posting submissions from artists across the country since Wednesday. Many pieces included the phrases “Mni Wiconi, Water is Life: Protect the Sacred” and “Honor the Treaties.” The art ranges from online graphic designs, paintings and banners to jewelry and choreographed dances. Many artists highlighted the dangers to natural waterways if the Line 3 pipeline leaks again into the wetlands of Anishinaabe and Ojibwe territory.

#StopLine3 activist and printmaker Dio Cramer ’20 is actively involved with the movement through the Art Storm.

“All day I’ve been going through Instagram and seeing incredible artwork that people have submitted,” Cramer said. “It’s really amazing to see, especially when it’s coming from people all around the world, not just in Minnesota. I just saw a picture of someone that had written Stop Line 3 in the sand in a desert somewhere, sending solidarity from there.”

Last Wednesday, Cramer added a collection of her screen-printed #StopLine3 t-shirts to the Art Storm. She’s created other screen prints and graphic designs to support the movement against Enbridge as well. She printed signs for #StopLine3 throughout 2020, having been introduced to the movement through her environmental studies professors Jim Doyle and Christie Manning at an MN350 meeting.

Cramer has been active in the #StopLine3 movement’s official art team ever since, creating many of the posters and infographics used in their online posts and frontline protests, as well as printed lawn signs. One of her new Instagram pieces reads, “Kill the Black Snake: Together We Will Stop Line 3.”

Cramer works with Sarah Harper, the director of the passive education working group for stop Line 3 resistance. With the goal of building awareness through posters and social media in mind, Harper said the Art Storm was a success.

“At minimum it’s inspiration for more art,” Harper said. “The supporters that posted on their personal accounts were so cool for opening up and being vulnerable. More people are sending in posts who didn’t know [the Art Storm] was a specific day.”

Harper also commented on the natural wonder of northern Minnesota. “I would recommend everyone going at least once to see the beauty of the Mississippi,” she continued. “When you see the great expanse of beauty, there is no question why people are fighting for it. When I laid eyes on the construction I started weeping, which I really hadn’t expected.”

Other Macalester students and alumni are holding their own artistic fundraisers for Stop Line 3. Helen Meigs ’21 has been using Instagram to raffle off hand-crocheted cardigans to those who donate to the frontlines. She is also helping run the @Resist_Line_3 Instagram account.

“I think it’s pretty cool that I’ve raised almost $1,000 [for stop Line 3] — that’s a big deal for me — but I also think it’s really important to remember that this movement is an Indigenous-led movement and that that work should be centered at all times,” Meigs said at the MacCARES meeting on Feb. 21.

“The eventual goal is land back and it’s not just about Line 3, it’s about a bigger situation,” Meigs added.

Meigs explained that her way of helping out the movement hasn’t been direct action or putting her body on the line in northern Minnesota, but she is happy to be doing what she can.

“A couple of my friends from Macalester are actually up north right now doing frontline resistance for the movement, and I couldn’t go with them because I had an in-person internship this semester,” Meigs said. “Put your social stock on the line and just do it, because who gives a shit? It’s more important.”

“There’s some super super cool people at Macalester doing pipeline work through MN350 and through Northfield Against Line 3, which are both awesome groups,” Meigs added.

Jaenicke chose to paint a picture of a loon because it represents the water and ecosystems put at risk by the pipeline. She explained that Line 3 resistance has been going on for most of her time at Macalester, but now that the Enbridge permits have been issued, the cause seems more urgent.

“Since construction began in November, it feels essential to add any contribution I can,” Jaenicke wrote in an email to The Mac Weekly. “It can be really hard to fully devote yourself to a movement while being a student and working a job, and one way I’ve found to chip in, even in a small way, is to raise money for the frontlines through my art.”

“The art of the Stop Line 3 movement is what has drawn so many onlookers in, including myself, both on social media and at protests.” Jaenicke added. “It’s definitely important to acknowledge that the symbols and stories behind the original movement art are not mine as a white person. [W]ith the circle of people I’m surrounded with (people that generally have resources to contribute), I feel like it’s important for me to share this story with them in the way I know how.”

Two weeks ago, The Mac Weekly reported that Macalester College remains invested in Enbridge. The Canadian fossil fuel company started rebuilding the Line 3 oil pipeline in Sept. 2020, on a different route through upstate Minnesota than the current Line 3 pipeline in the ground: now through wild rice lakes in Anishinaabe territory. Sasha Lewis-Norelle ’21 and Emma Harrison ’21, representatives from former Macalester student divestment organization Fossil Free Mac, are asking the Macalester Board of Trustees to divest from the company and  helping to organize a Day of Action on March 5. Activists from across the country have been using Instagram to support and educate their friends and the general public, asking Biden to order a stop on Enbridge’s tar sands project.

President Joe Biden blocked the Keystone XL Pipeline permit from Alberta to Nebraska as one of his first executive orders. Construction of both the Keystone XL and Dakota Access Pipelines were pushed forward by former President Donald Trump’s administration after being blocked by former President Barack Obama. Enbridge’s Line 3, however, was approved for replacement by the Obama administration in 2016.

The pipeline violates treaty rights to the Anishinaabe peoples and endangers their cultural livelihoods of wild rice agriculture by posing the threat of pipeline spillage. Line 3 has the capacity to transport 800,000 barrels of oil every day from Canada to Superior, adding to the non-renewable fossil fuel energy economy. A break in the pipe could severely damage Minnesota’s wetland habitat and endanger tribal members.

Whether students have been taking direct action in northern Minnesota, protesting Enbridge’s funding and educating others and themselves through art on social media, it’s clear that a large portion of the Macalester community feels strongly about stopping Line 3 construction.

“It’s an incredible movement made up of really dedicated people and there’s a place for everybody, and a need for all different kinds of skill sets, so I encourage people to figure out what skills they have to offer and see how they can apply that to the movement,” Cramer said. “I’m an artist and that’s what I do and sometimes it’s helpful to people, so find the skills that you have and figure out a way to use them to help.”

Toolkit and Guidelines to continue creating art for #StopLine3