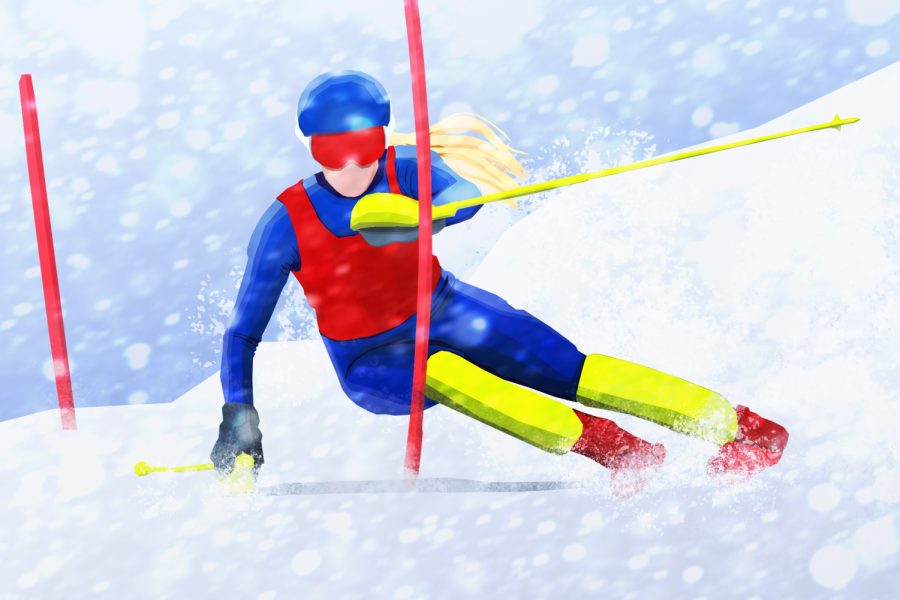 Mikaela Shiffrin, a 25-year-old U.S. Land Rover Alpine Ski Team athlete, is one of the most dominant woman alpine skiers in history. Across all alpine disciplines, Shiffrin is a commanding force on the world cup circuit with the second-most all-time wins for women, only behind former U.S. Ski Team member Lindsey Vonn. Shiffrin is undisputedly the best women’s slalom skier the circuit has ever seen with 44 slalom victories.

Since the 2012-13 world cup season, Shiffrin has acquired six slalom globes, one giant slalom globe, one super-g globe and three overall globes. Globes, in alpine ski racing, go to the athlete who tallies the most points throughout the season, which are awarded based on the results of races in each discipline (skiing event). Winning one globe in a season is an impressive feat for any skier; in the 2018-19 season, Shiffrin walked away with four.

At the height of her career during the 2019-20 season, with Shiffrin leading in the overall standings and headed towards an American record of four straight overall globes, her father suffered a head injury. Because of his accident, Shiffrin headed home to Colorado from Europe to be with her father, who died shortly after her arrival back home. By the time she was preparing to head back to the world cup circuit, the COVID-19 pandemic put a premature end to the season. This left Shiffrin without a globe for only the second time in seven years.

When the 2020-21 ski season began in November 2020, Shiffrin had not entered the start gate in over 300 days. In the early races, she struggled to get her pace and rhythm back, finishing second, fifth and fourth in her first three of the season.

Finally, on Dec. 14, Shiffrin won the giant slalom in Courchevel, France and a slalom a month later in Flachau, Austria. For fans of the sport and Shiffrin alike, this was a sign that she was back. After her win in Flachau, Shiffrin finally felt like she was beginning to move past the loss of her father. She described her winning race runs as “letting go” in her search to once again find joy in the sport.

“You can’t really move forward until you stop trying to go back, and I’m having a difficult time with that,” she said in an interview after her slalom victory. “I want to change so many things that happened this last year. It’s hard not to want that, to just want life to be like it was before Feb. 2. I’m probably going to be struggling with that for a while, but I think that tonight was a pretty big step.”

Jump forward to these past two weeks in Cortina D’Ampezzo, Italy, where the 2021 Alpine Skiing World Championships (World Champs) were taking place. The World Champs is a ski racing event that takes place every other year and holds races in all disciplines — downhill, super-g, super combined (one run of slalom and one run of super-g), giant slalom, slalom and a parallel slalom team event. Expectations were high for Shiffrin this year because she has won the past four slalom World Champs races and came in with seven previous World Champ medals.

In an interview after grabbing her fourth medal of the Champs in the slalom, Shiffrin’s spirits were high as she reflected on her performance.

“I never imagined that I could win four medals in one world championships,” Shiffrin said on Olympic Channel: Home of Team USA. “There’s not a lot of things left to accomplish on paper, but I still feel motivated to ski faster and, especially on days like today, when I see the level of skiing that’s possible… I want to go training tomorrow. Let’s keep pushing.”

With four more venues to go on this season’s circuit, Shiffrin still has many chances to keep pushing her skiing. She currently sits in seventh place in the competition for the overall globe, third in the slalom globe standings and fifth in the giant slalom standings.

Shiffrin expressed optimism for her skiing after her performance at World Champs but recognized that ski racing is a dynamic sport and one great series means little for her results in the rest of the season.

Still, whether or not Shiffrin walks away with a globe in March, her performance at World Champs solidified her as a force to be reckoned with this year and reminded everyone that she is not done yet.

“When I was a little girl, and I wanted to be the best in the world, I wrote in my diary, ‘I want to be the best skier in the world,’” Shiffrin said in an Olympic Talk interview after winning the super combined in Cortina. “I’ve done some things nobody’s done before, for sure. I’ve always been trying to just push the limit, push my own limit first, then trying to push the limit in the sport. I feel like, on my really good days, I’m doing that.”