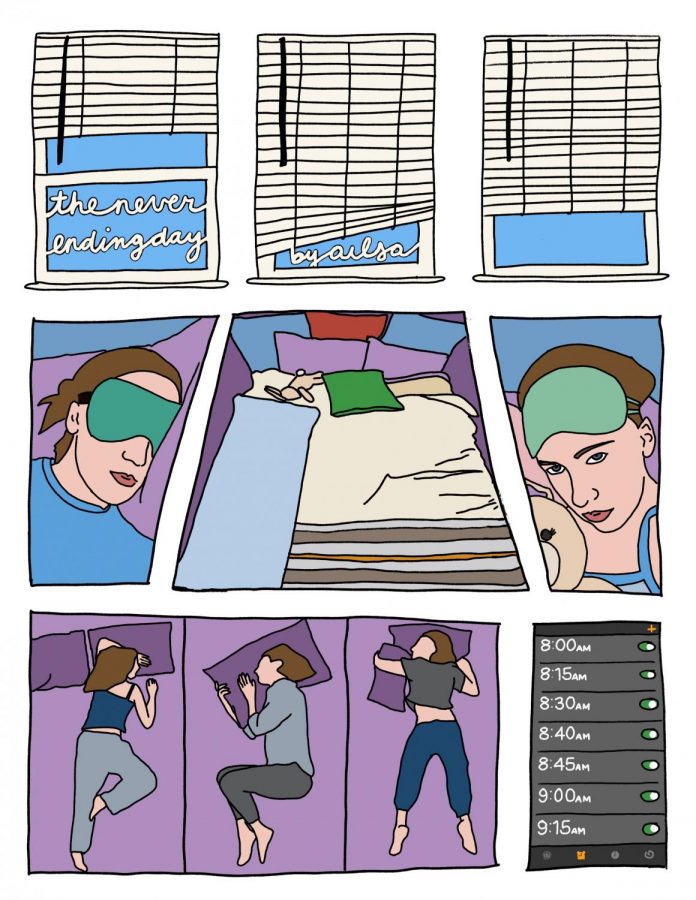 Even amidst a pandemic, virtual classes and the cramped pace of the module system, studio art majors are still finding ways to make meaningful work. Ailsa Burke ’21 has had to look inward to prepare for her capstone in module 4 from her off-campus apartment.

“Lately, I’m making art that is familiar in subject and content to what I’m experiencing,” Burke said. “So right now that’s myself, my apartment, my surroundings. I’d say most of the stuff I make, just like any artist, is what I’m seeing in the world, my perspective.”

Even in the never-ending St. Paul winter, Burke’s world is filled with color. When the sun is out, she bundles up and gets all the vitamin D she can — but she spends most of her time in her studio apartment, a sanctuary brimming with over 40 plants which she laughingly calls a “tropical Minnesota.” Soon she hopes she will share the space with a cat.

Creating pieces in this space, though, is an adjustment Burke is still having trouble accepting.

“Creating and being in a classroom with like, 12 other students who are all drawing or working on a similar project, is such a different atmosphere than making art by yourself,” she said. “Not only are you physically around other people, but you’re bouncing ideas off of each other and you’re looking at each others’ work, and usually the professor is walking around helping you and talking with you.

“It’s been a lot more independent,” she added. “That has been somewhat difficult, because of self-discipline but also motivation. It’s helpful to see other people and their processes so you don’t get to a place where you’re struggling and you feel like you’re the only one that can’t make what you’re trying to make. I feel like a lot of people have that problem, and when you’re with other people it’s easier to see that everyone’s on the same pathway to their final product.”

Burke’s current plan for her capstone reflects this struggle. She is intending on creating a large-scale drawn portrait which may also include photographs and screen prints that she has made around her apartment — an “amalgamation of different techniques,” she explained, which bring together her three current mediums of choice.

As her four years of college are coming to a close, Burke is finding her motivation to make art for pleasure waning.

“I’ve been so burnt out on the process that is getting a prompt, churning out a finished piece of art in a week or two, turning it in, getting graded on it, getting another prompt and doing that over and over again,” Burke said.

Even while physically separated from her community, she has found that other studio art majors in her classes feel the same way. Her drawing professor, Megan Vossler, has acted as a sounding board for Burke and others as the module has progressed.

Burke is combatting Zoom fatigue by taking on smaller, process-oriented tasks for fun, rather than product-oriented work. She is finding joy in sending homemade cards to friends and family and baking desserts for her neighbors.

“Lately, you know, I can paint my nails exquisitely, but give me a canvas and I will not know what to do,” Burke laughed.

Though she is feeling ready to make art exclusively outside of an academic setting, Burke is also unnerved by the lack of constraints after graduation.

“No one’s giving you a deadline, no one’s pushing you, no one’s grading you,” she explained. “It’s a very different creative process — hopefully less stressful, and hopefully more free-flowing and longer. I was talking to Megan [Vossler] a couple weeks ago about how in classes you have no break time between projects: you turn one in, and you immediately start another one. Whereas in the real world, people will sometimes spend years working on one project, and you take a break for as long as you need to before starting another — you don’t have to three days later.”

“I’m nervous, but I’m also excited to have no constraints,” Burke concluded. “It’ll be cool just to see what I end up making when I’m only there to please myself and not my professors or my GPA.”

Burke’s future art practice, in whatever medium it may be, is sure to continue. She will no doubt keep creating things for others, but her main audience, for the first time, will be herself — and, hopefully, a cat.

The senior studio majors’ capstone show will be towards the end of module 4. More details will be available in the coming weeks.