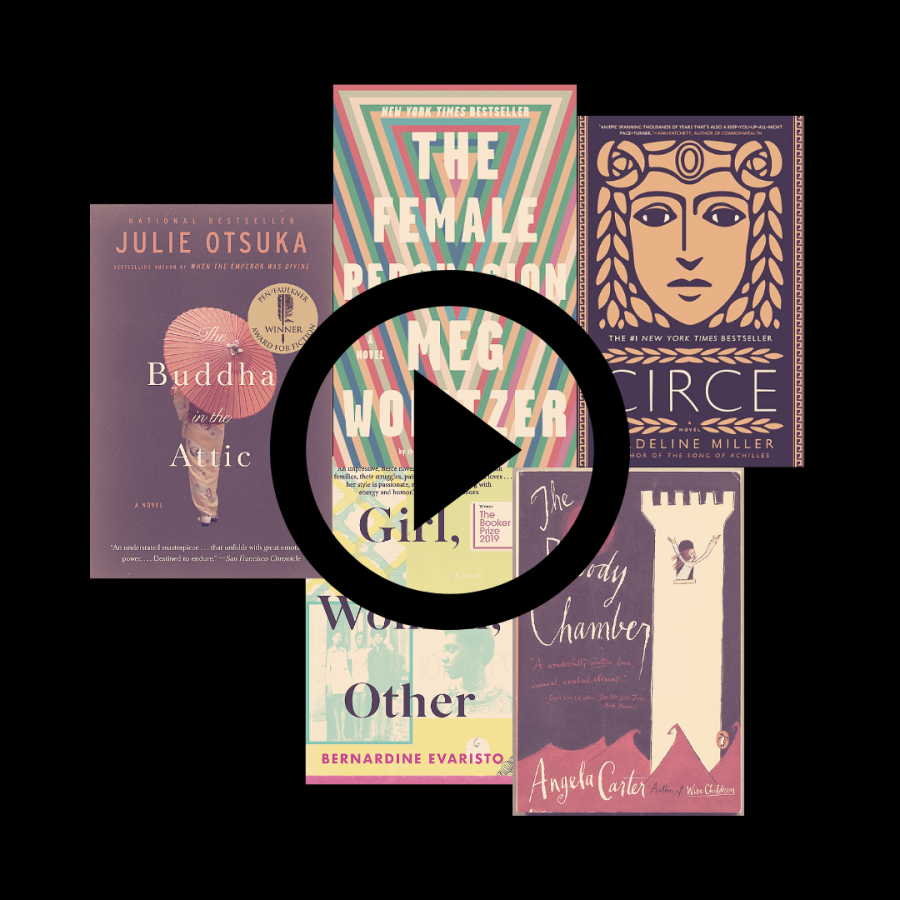 The titles for this week’s booklist. Graphic by Chloe Moore ’24.

We’ve all made playlists before: identified a hyper-specific mood, carefully curated the songs, came up with a funny title and slapped a well-edited cover image on it. Personally, I like building the soundtrack to different scenes in my own coming-of-age film. That music is a backing track for my own dramatic narrative. So, here’s the next level: a playlist comprised of narratives. A playlist of books. A booklist, if you will. These are my favorite novels by and about women, curated to provide a dive into the nuances and intricacies of the female experience. It’s like a mini-syllabus if I taught a course on women’s literature — but it’s better than a syllabus, because there’s no homework (but that doesn’t mean you won’t learn!). Read on!

Meg Wolitzer writes her female characters with a depth, sensitivity and interiority that I have yet to encounter elsewhere as a reader. Her characters are fiercely human; her writing serves to remind us that the quotidian aspects of the female experience are just as worthy of great literature as the antics of men. Wolitzer masterfully weaves together narratives that trace the life of Greer Kadetsky, an awkward college student who becomes the mentee of a well-known but slightly bygone feminist icon, Faith Frank. The balance of Greer’s personal life and career is handled delicately — but, crucially, Greer herself is not perfect at finding this balance. Wolitzer proves that it’s possible to write female characters that are both flawed and ultimately worthy of a happy ending if they put in the work over the course of the narrative. But the most important part, for me, is Wolitzer’s reminder that corporate feminism is not the panacea, that careers don’t necessarily equal fulfillment and that movements do better when they are non-hierarchical and community-based. Maybe it’s just me looking for this in the text, but “The Female Persuasion” is a strong argument for a kind of socialist, intersectional feminism — one that is handed down through generations and survives because it doesn’t rely on any particular figurehead to keep the movement alive.

Bernardine Evaristo’s “Girl, Woman, Other” taught me more about the experiences of women of color, particularly Black women, than my entire high school experience combined. It’s problematic that a Black woman had never won the Booker Prize until this novel, but I can’t imagine a better place to start what I hope is a tradition of duly acknowledging more diverse writers. This book is a tapestry of six different interlocking narratives that needed to be told. Evaristo’s book is a testament not just to the individual resilience of Black, queer and trans women; it’s also proof of the durability of the feminist tradition, even if that feminism is not always obvious. Evaristo doesn’t shy away from conflict; she forces readers to confront the racial, national and sexual power dynamics that can perpetuate harm even within feminist spaces. Traversing generations and backgrounds, Evaristo builds a mosaic of women and femmes. This book isn’t a light read, but it’s a great reminder of the power that exists all around us.

If you read Percy Jackson and thought, “Hmm, I want this, but about women, and with incredibly delicate and descriptive prose,” then I can’t recommend this highly enough. Even if you didn’t have that exact thought process, “Circe” is absolutely worth the read. As the name suggests, it’s a retelling of the Greek myth of the exiled witch and the island that becomes her home. At once classic and refreshing, it challenges the idea that powerful, magical women must always be villains, and that mistakes must condemn one to damnation. The novel provides an expansive catalogue of experiences tied to womanhood: first love, heartbreak, family, motherhood, magic and more. In the context of the pandemic, the story of a woman isolated from the world might feel a little too close to home, but Miller avoids monotony and rotates a wonderful cast of characters, both familiar from the myths and newer, weaving a rich story of a woman and the world she builds around herself. Much like Miller’s other retelling, “The Song of Achilles” (also a great read!), “Circe” is a delicate story that artfully illustrates what is so often left out of the canon.

“The Buddha in the Attic” — Julie Otsuka

I don’t think I was taught a single thing about the Japanese American experience in high school outside of reading this book. There’s a huge problem with that, which we can and should talk about, but for the purposes of this booklist, I include this fact simply to underscore the importance of “The Buddha in the Attic.” This book is a testimony of pain, and serves as a fierce reminder of a period of our history as a country that we too often ignore. Otsuka’s writing demands to be read; the histories she relays demand to be acknowledged. “The Buddha in the Attic” does two things brilliantly: it records trauma, saying, “This is what happened to these women,” and it refuses to define women only by their pain. From a craft perspective, I’ll admit it was initially difficult for me to get into the book. The collective nature of the narrative was so different from the individualism of much of white, Western canon that it took me by surprise. In the end, though, Ostuka’s decision to tell many stories throughout the course of the novel, rather than focusing on a central main character, builds a kind of miniature sisterhood within her pages that make this book wholly worth reading.

If you’ve ever wished Phoebe Bridgers’ music was a short story collection, I have really good news for you. This collection of stories is a series of retellings of famous fairy tales, but with a slightly twisted, often feminist take. They’re not light — Carter doesn’t shy away from dark themes — but the collection is a wonderfully interesting dive into women’s empowerment through violence. “The Bloody Chamber” isn’t just horror: it deals with marriage and mothers, heartbreak and the natural world. From big bad wolves to vampires, from failed marriages to strange forest spirits, Carter builds stories that, like a Phoebe Bridgers’ album, fit well together without becoming repetitive. She unlocks a very specific part of the female experience in these stories, the kind of slight derangement that is too often mishandled in the hands of male writers and directors. It’s a creepy, lovely collection and a nice wrap-up to this booklist.

These honorable mentions are included as books that explore womanhood but also branch out from that topic; Synclair deals brilliantly with the queer experience, and Nervous Conditions centers on the colonized subject. I also encourage readers to support local, Black-owned bookstores like Moon Palace Books and Black Garnet Books if you’re buying copies!