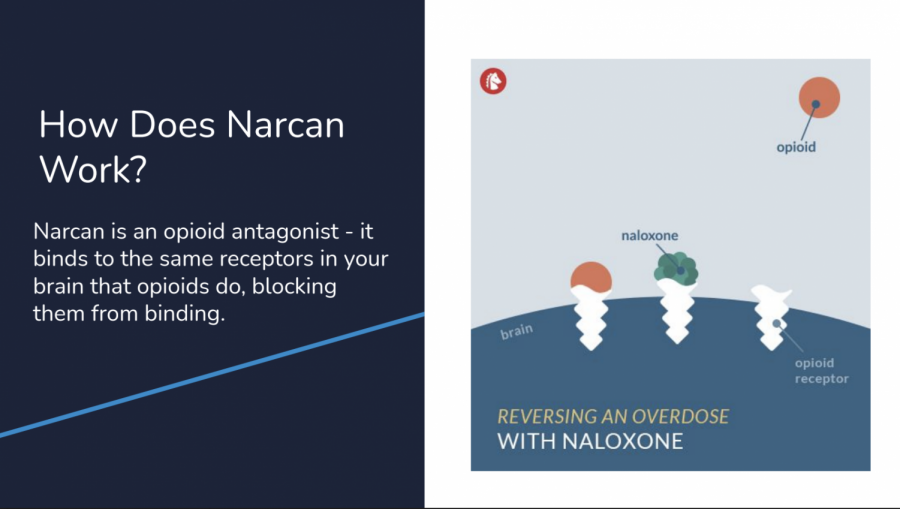 This past November, El Alcala ’24 was riding the A-line bus when they saw another passenger slumped over in his seat.

“He had all the signs of overdose,” Alcala recalled. “He was blue and he had pinpoint pupils.”

Alcala was able to recognize that the person was experiencing an overdose and quickly took out a supply of naloxone, commonly known as Narcan, which is a medication that reverses the effects of opioid overdose by binding to the same brain receptors as opioids do. They gave the passenger two injections as other bus riders called 911 and the bus was pulled over. The man regained consciousness soon after the second dose and left before EMTs arrived on scene.

Alcala received their supply of naloxone and training in history professor Amy Sullivan’s class, “Uses and Abuses,” where students learn about the history of substance abuse and the shifting views on addiction in the modern day. Since the second time she taught “Uses and Abuses,” Sullivan has partnered with Stephanie Devich from Valhalla Place, an addiction and mental health treatment center, to provide her students with naloxone and naloxone training.

Sullivan emphasized that the opioid epidemic is a widespread issue that should be more universally recognized. She compared the importance of naloxone training to CPR certification or learning how to perform the Heimlich maneuver, both of which are common lifesaving measures.

“We often think of problems in public spaces as being for the fire department, the EMTs  or the police — we’ve outsourced everything,” Sullivan said. “Had the man been left to turn blue and quit breathing, he may well have died before they got there.”

As Alcala witnessed, overdose is becoming more common in public spaces. Alcala hopes that their experience will encourage others to learn more about the issue and start having the difficult conversations needed to address it.

“I think that everyone should at least learn about naloxone, harm reduction and the things we can be doing as a society to stop stigmatizing drug use,” Alcala said. “Even if you aren’t comfortable injecting someone, you could guide someone else in the procedure or help check vitals and identify signs of overdose.”

Even if someone is not suffering from an overdose, administering naloxone will not harm them, and a rapid response is essential to ensuring that more serious damage to the person’s health does not occur.

Sullivan and Macalester Emergency Medical Services (MacEMS) have worked with the Laurie Hamre Center for Health and Wellness over the past several years to educate the student body about naloxone and make the medication more accessible to Macalester students.

“Everyone is capable of having a problem with opioids, no matter who we are,” Sullivan said. “It’s not a targeting issue.”

Clara Motiño ’19 originally spearheaded the movement to bring naloxone to Macalester  in 2018. Since Motiño’s graduation, MacEMS has continued to provide naloxone training to Macalester students. Naloxone has been placed alongside the defibrillators (AEDs) that are stationed around campus as of the fall semester of 2019.

Zarra TM ’21 and Tenzin Dothar ’21 from Mac EMS hosted a “Know Overdose” training session on Dec. 2, where participants learned how to respond to signs of overdose and excessive alcohol consumption. The training session included instructions on how to administer naloxone, how to care for someone experiencing an overdose and acted out a few potential scenarios where participants could demonstrate what they had learned.

“I think everyone should be Narcan trained, but transit employees, custodians, anyone with prolonged contact with massive public spaces could really benefit from training,” TM said. “Narcan should be as common as a lot of other practices.”

The “Know Overdose” training session also covered some common misconceptions about naloxone, one of which was that popularizing naloxone training and making the medication more accessible will promote drug use.

“If someone is going to use a substance, they are going to use it regardless of how safe it is,” TM said. “The longer that someone is alive, the more likely they are to be able to decide to recover, live their life and be with their family, friends and children.”