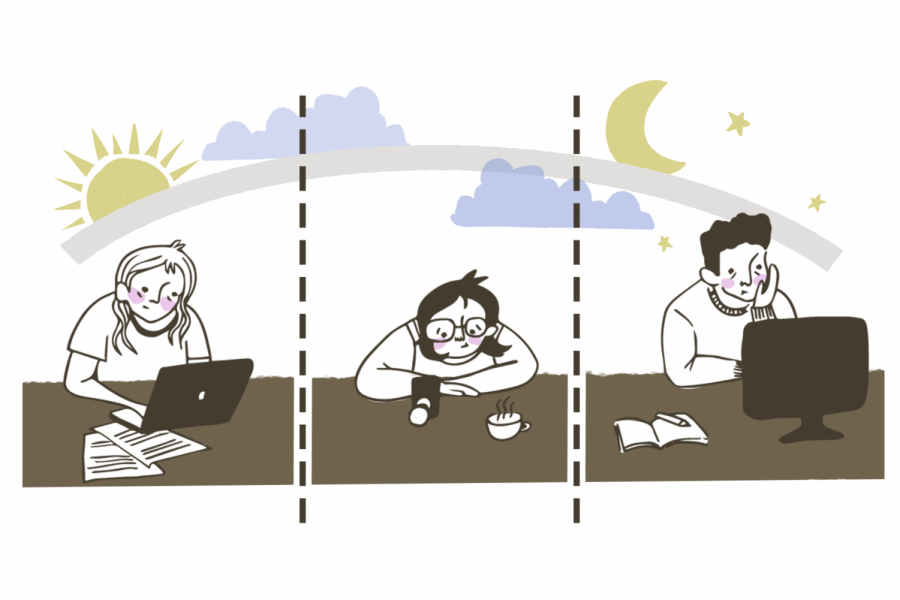 Even as news about successful vaccines creates optimism about the future, the grim reality of the global pandemic still rages on. With international travel still heavily restricted and visa appointments difficult to make, many students living abroad have been unable to come to Macalester’s campus. The time differences students face, sometimes more than 12 hours, have required them to restructure their daily habits and schedules.

Sam Ding ’22, who lives in Beijing, typically goes to bed after 2 a.m. even though he has been lucky to find classes relatively early in the day, Minnesota time.

The time difference makes focusing late at night or early in the morning difficult. Rayan Hamid ’22, who is currently in Egypt, seven hours ahead of Central Standard Time, added that taking classes that would create a normal daily rhythm can be difficult thousands of miles away from campus.

“Being home and taking classes at such weird times makes it really hard to focus, so I tried to register for morning classes as they would be in the afternoon for me,” Hamid wrote in an email to The Mac Weekly. “But obviously so I don’t have to change my plan for future semesters, some classes I had to take now. For example this module I also had a night class which is at 3 a.m. for me, so my sleep schedule is kind of all over the place.”

“Studying under this time difference does give me a lot of restrictions when I’m planning ahead on what I want to study next semester,” Ding added. “If I want to be in an appropriate timeframe with the other people in China, then it has to be in the early mornings or in the late nights.”

Just like classes, resources, meetings and office hours are less accessible if they are in the middle of the night. Jarita Chen ’22 lives in Taiwan, currently 14 hours ahead of Central Standard Time, and is combining taking courses from Macalester with local studies at a university in Taiwan. She said that it’s difficult to partake in extracurricular activities.

“Although I did enjoy my Mac course, I felt like I couldn’t participate as much as I’d like with my local studies, student orgs and events,” she wrote in an email to The Mac Weekly.

Ding finds it hard to schedule meetings at times which are appropriate for him.

“If I want to schedule something, I wouldn’t be able to do it before 8 a.m. Minnesota time because everyone is asleep,” he said. “So then I have to schedule it some time after the classes I have. That would be at 1 a.m. or sometimes, 2 a.m.”

Haris Ahmed ’24, who lives in Pakistan 10 hours ahead of Central Standard Time, has developed a sleep-work schedule he calls “chunking.” Since Ahmed might have meetings at four or five in the morning, he wakes up and immediately goes back to sleep throughout the night and day.

Ahmed said that the most challenging part of his schedule is “Having meetings at random times; having very small chunks of sleep.”

“Napping has been useful but sleeping one minute and then going straight into a very intense discussion about campus finances, that takes a mental toll,” Ahmed, a member of MCSG, added.

Ahmed also commended his professors on the efforts they made to accommodate his situation.

“What my math professor did was that, for international students who were in very different time zones where it’s just not possible to attend 2 a.m. classes, she made a different Jamboard for us,” Ahmed said. “We would meet the professor at a designated time. That was one class where we could all discuss at the same time.”

Chen said that her professors have been understanding and that she received support from International Student Programs (ISP) as well.

“I’ve communicated with my professors about my situation, and they have been quite understanding and supportive,” Chen said. “The International Student Program[s] has always made themselves available, and that was very important to me too.”

“For some students it gets hard to be synchronous or even asynchronous and to follow up with their professors and classmates,” Phan said. “People express not being able to be in contact with their classmates and professors like they were, particularly those who are coming back and had that experience prior to the pandemic.”

Director of International Student Programs Aaron Colhapp added that communicating with other areas of the college has been important.

“There are a lot of case by case situations and each of us are collectively working with it, whether it has to do with academics and the MAX Center, or we might work with Academic Affairs about issues,” Colhapp said. “Certainly [we try] bringing the time difference to light a little bit: encouraging people to consider their class schedule much more by time and not just what you want to take.”

Chen thinks the issue of international students being unable to come to the U.S., given the consequences for their daily lives, needs more attention from the Macalester community.

“Sometimes I can’t help but feel like international students abroad are kind of just forgotten by the institution and everyone,” she wrote. “Most of the time, time difference seems to be an afterthought, like for events or office hours; you always have to ask.”

“So you have asynchronous class for most of the time and maybe for international students, just like my professor did, maybe two times a week you can have a specific time slot where those international students’ groups could meet and discuss,” he said. “Having more preceptors in different time zones would make it easier for students to go to office hours to discuss their questions. There would be less of a time lag.”

Despite the difficulty of his situation, Ahmed said that he’s tried to find ways to spend his time leisurely as his social time with friends has been cut off.

“I picked up chess,” he added with a smile.