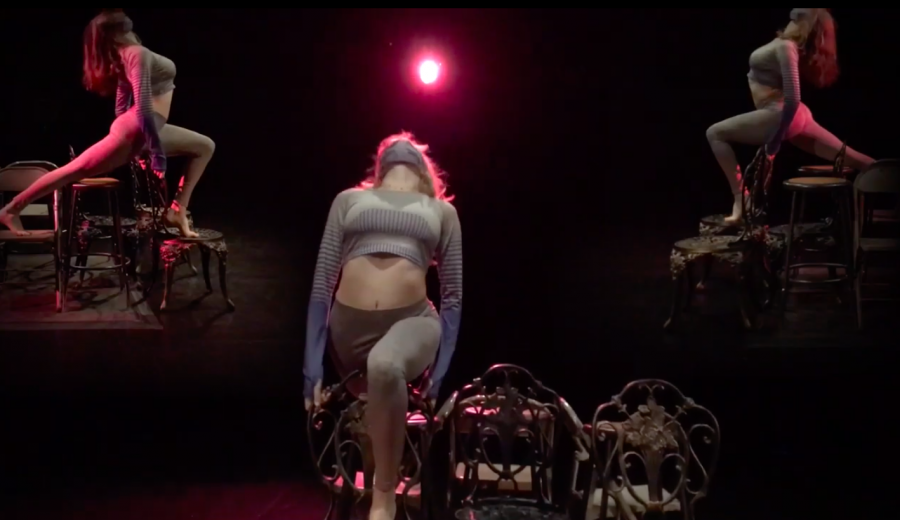 On Saturday, Nov. 21, the Theater and Dance Department presented their annual fall production, “Perspectives.” Due to COVID-19 restrictions, students were not able to perform on stage in front of an in-person audience, but the department found innovative ways for students to express themselves.

“Perspectives” was a series of filmed theater and dance pieces edited together into an hour-long film that was broadcast live over Vimeo and Youtube, then available for additional viewing over the weekend. The theme of the production reflected each individual performer’s perspective on “this time of upheaval and uncertainty,” according to the production’s webpage. After the broadcast, audience members could join the post-show conversation with the performers, directors and crew.

The performances were filmed in a variety of locations and utilized a wide array of digital effects. Bedrooms turned into forests via green screens. Other rooms changed colors and were enveloped by patterns. In some scenes, the use of multiple angles in the same shot created a visual experience that would not be possible in an in-person stage performance. This different approach prompted some challenges for set designers, who are used to working in-person within the performance spaces in the Janet Wallace Fine Arts Center.

“When you’re designing everybody’s bedrooms and everybody’s Zoom box, you don’t even know what the constraints are, and that’s really hard,” production designer Aidan Endo ’22 said.

The decision to record the individual pieces was not the department’s original plan. Most of the rehearsals over Zoom were done with the intention of eventually live streaming the performance through Open Broadcaster Software (OBS). As the show date drew closer, though, it became apparent that livestreaming was no longer a viable option. Stage manager Asher de Forest ’21 said the directors worked through several different plans over Zoom. Ultimately they decided to record all of the pieces in the week leading up to the production’s premiere.

“People haven’t made theater like this before because they haven’t had to, you know? So, by necessity, we’re breaking new ground,” de Forest said.

For the performers themselves, developing these pieces led to different approaches in considering their virtual audience and presenting their most authentic selves.

“I really wanted the audience to laugh; that was my main goal,” Clark said.

His piece, “RADICAL JOY,” opened the production with colorful visual effects, an alien onesie and a stuffed purple gorilla.

Other students chose not to focus on the audience. Instead, they saw this new approach as an opportunity to embrace their own vulnerability.

“When I filmed my [piece “Germination”], I wasn’t really thinking of the audience at all,” Milon said. “I was focused on telling my story, just trying to get it all across.”

For O’Bryan, who has danced competitively for several years, “Perspectives” gave her the freedom to do whatever she wanted for her performance, “Breath,” which concluded the series.

“It became a truly therapeutic process in that it was something deeply personal, something that I felt that I was presenting for really no one but myself,” O’Bryan said.

Several viewers joined the post-show conversation that followed the live premiere. Many involved with the production discussed the significance of “Perspectives” within the nature of the theatrical art form and commended the performers and crew for what they were able to accomplish.

“When you’re devising a show, it’s a really messy process, and you have to embrace that right from the beginning,” Rosen said. “It’s exciting [and] scary, but that’s why we do what we do.”

“Everyone involved worked so dang hard, and was really admirably creative and flexible,” de Forest said. “I’m proud of the show, and I’m proud of the people who made it happen.”