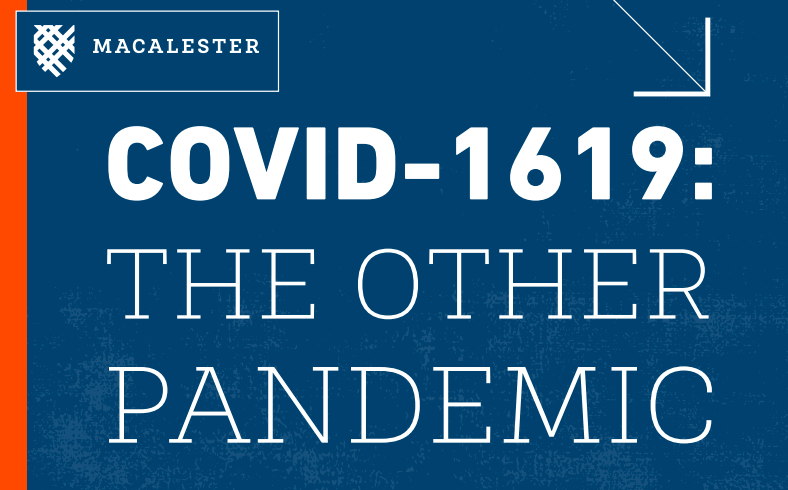 The front page of the COVID-1619 mailer.

On Nov. 23, American studies professor Duchess Harris tweeted a preview of this year’s mailer that Macalester admissions was preparing to send to prospective students for the class of 2025. The front page of the mailer read “COVID-1619: The Other Pandemic.” On the second page, there is a quote from Harris from a June 2020 Macalester alumni webinar discussing systemic racism, where she states “Black America is suffering from COVID-1619. It combines the health pandemic with the year enslaved Africans were first brought to North America.”

Atlanta pastor and U.S. Senate candidate from Georgia Rev. Raphael Warnock first coined the term COVID-1619 during one of his sermons and publicly during an MSNBC interview on June 8, 2020, after the killing of George Floyd at the hands of Minneapolis police officers in May.

“A pandemic in my opinion is something that is temporary… and racism is not temporary,” Briah Cooley ’21 said. “It’s a social justice, human rights issue and for Macalester to call it a pandemic so they can have a fun play on words or easy marketing is really frustrating.”

The mailer was set to be sent to prospective students in the next couple of weeks. After being alerted of the activity on Twitter, admissions paused the COVID-1619 mailer, and the link to it was deactivated on Nov. 24.

Assistant Vice President for Admissions and Financial Aid Brian Lindeman ’89 said the idea behind the mailer was to educate and inform high school seniors about the social issues taking hold in this country.

“From the beginning… it didn’t feel like a year when doing the usual recruiting brochure was the best choice,” Lindeman said. “We started talking about whether it was possible to create something for this pretty large group of high school students that could be educational or helpful.”

“In June, Professor Harris did a webinar for alumni where a lot of this content was shared and then it was also delivered in print in the alumni magazine summer issue,” Lindeman continued. Highlighting the important work of a Macalester faculty member seemed like it could be an appropriate way to communicate with this audience of high school students.”

Lindeman said he would still like to showcase Professor Harris’s work in a different format for a new mailer.

“Sharing Professor Harris’s work with this group of people is still something I’d like to find a way to do,” Lindeman said. “But I don’t feel good about where we are with this particular piece. [The mailer] will have to be reworked and delivered in a different way.”

This is not the first time that the college has compared systemic racism to the pandemic. Students expressed very similar concerns with that framing in September, after Dean of the Kofi Annan Institute for Global Citizenship Donna Maeda sent an email to the Macalester community announcing that the 2020 International Roundtable theme would be “Facing Pandemics of Disease and Race: Radically Reimagining for Liberatory Futures.”

Lindeman said he was not aware of the conversation happening around the use of “pandemic” to describe systemic racism.

“If I could turn back the clock… that’s what is really problematic, that I needed to be in tune with that conversation,” he said. “And so we could have done this differently and really avoided some of the offense that this has caused unnecessarily.”

Lindeman said that looking back, he would have sought student input on the mailer earlier in the design process.

Since Floyd’s killing, President Rivera and members of her administration have implemented more racial justice initiatives, including adding mental health resources for BIPOC students, forming employee identity collectives, initiating an equity purchasing initiative to encourage the allocation of college resources to women-owned and minority-owned (WBE and MBE) businesses and recruiting faculty who specialize in African-American history and environment and health with an expertise in Native/Indigenous/Pacific or Latinx/Chicanx Studies.

Cooley, who is the Student Organization Committee (SOC) Chair on MCSG, mentioned that while she acknowledges that this year Macalester is placing greater emphasis on connecting BIPOC students to mental health resources, she would like to see the institution incorporate more of Black students’ feedback into their decision-making processes when creating outward-facing promotional material like admissions mailers.

“You need to check in on Black students, but you also need to listen to us too,” Cooley said. “You need to get student input when you release things like that, and for [COVID-1619] to be on a college flyer is really terrible, especially when Macalester does not accept many domestic Black students in the first place.”

Cooley said that the college should focus more on the several internal structures that perpetuate institutional racism at Macalester, including the name of the library, which is named for DeWitt Wallace, a Macalester alumnus and the founder of Reader’s Digest.

“If they want to make a difference, I want them to change the name of the library,” Cooley said.“That’s the first thing that they need to do.”

In the 1940s, DeWitt Wallace printed several racist writings in Reader’s Digest, including excerpts from Anne Lindbergh’s 1940 book “The Wave of the Future: A Confession of Faith,” where Lindbergh praises Hitler and Nazism. Wallace also ended his record of making generous donations to Macalester in 1971, four years after Macalester had initiated the Equal Educational Opportunities program in 1967 to provide full scholarships for 75 students of color each year.

The subject of naming is very pertinent to Macalester. Almost a year after Macalester stripped the name of Edward Duffield Neill and restored its name as the Humanities Building in November 2019, the Chair of the Board of Trustees Jerry Crawford ’71 recently said that the Board will discuss the concept of naming and explore the renaming of the Humanities Building at its next meeting in February 2021.

“The thing that’s even more messed up is the DeWitt Wallace grant that goes to many low income students,” Cooley said. “So we have this grant, this huge amount of money that we get from financial aid with this racist white man’s name on it.”

Dean of Multicultural Life Marjorie Trueblood said that engaging students, staff and faculty in dialogue more often about these separate perspectives might be one way for the college to develop a unified vision of how to approach topics of race from an institutional standpoint.

“In terms of how we move forward, I think it would be cool to see opportunities for dialogue to happen,” Trueblood said. “Thinking about, like, how we can have dialogues not necessarily to change somebody else’s mind about their perspective…  But to understand a little bit more about why people hold the perspectives that they do, and understand what are the impacts.”

Trueblood said that there is work being done internally to support initiatives centered around racial justice and supporting Black students, staff and faculty.

“There are efforts that are underway to address some of the issues that have been structural around diversity and inclusion, we just might not necessarily be as great at internally communicating what is happening around the person to address some of those issues,” Trueblood said.

Cooley remains skeptical. “[Macalester] needs to pay more attention to students and what they’re exposing them to and how it’s not easy to constantly be reminded of systemic racism every day by the school.”

Professor Duchess Harris declined to comment for this story.