Students pack up dorms for an uncertain winter break 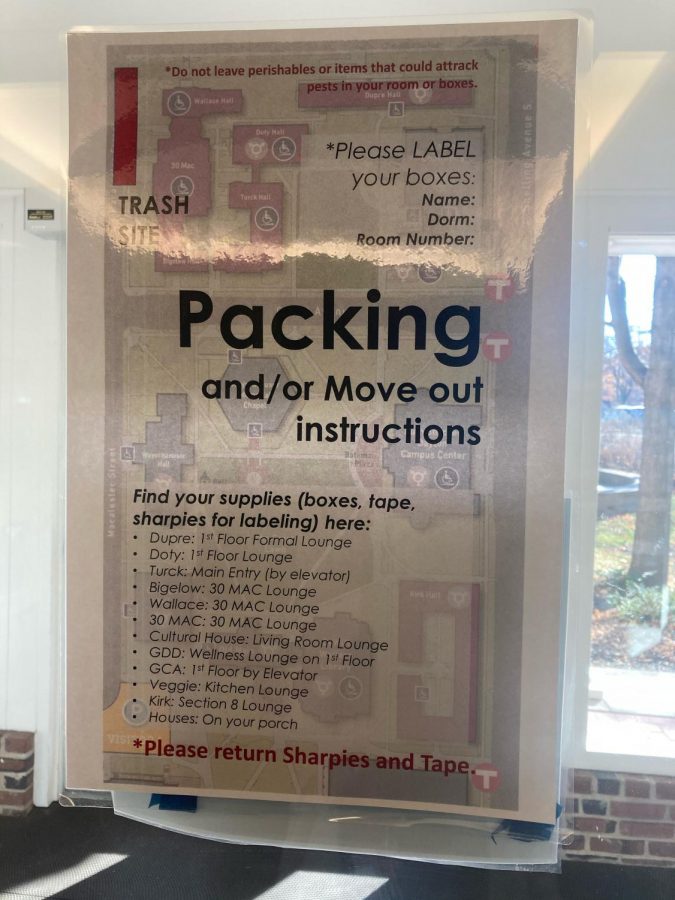 A sign in the dorms instructs students to pack out as much as possible. Photo courtesy of Hannah Scharrer '24

This holiday season, students are once again finding themselves packing up and travelling in a shadow of uncertainty. Minnesota has become a national hotspot in the latest peak of COVID-19 cases, with over 1,700 people hospitalized and over 39,000 currently infected.

The spread of the virus spurred a new emergency executive order from Governor Tim Walz implementing a four-week dial-back, some earlier-than-expected closures of campus spaces and a new doubt about what the return to campus in January might bring.

President Suzanne Rivera announced those changes in an email on Thursday, Nov. 19. In addition to ending in-person classes and activities on Nov. 20 — five days earlier than previously planned — the email suggested the possibility that Macalester may not bring students back to the dorms in January.

“While we plan to open the residence halls for Module 3, public health guidance such as the Governor’s executive order may dictate a different path in January,” a bullet point halfway through the email read. “When you depart campus, you may want to consider boxing your belongings or taking them home with you.”

The advice has made the end of an unusual semester feel even more strange.

Scharrer plans to leave her room in George Draper Dayton Hall and take a one-way flight home when classes end for the semester.

“There hasn’t been any other communication about what to expect, so I haven’t bought my tickets to come back yet,” Scharrer said.

Cora Lewis ’24 said that the possibility of dorm closures, and the lack of further communication from the college on that guidance, sparked some stress.

Special Assistant to the President and Director of COVID Operations Paul Overvoorde said the college is asking students to take this as an extra precaution.

“There is no crystal ball for what January’s going to look like,” Overvoorde said. “It really wasn’t intended as a must-do and an all-call, but just simply a mindfulness that the virus continues to control what is and isn’t possible.”

Last March when the college sent students home, many left their rooms more or less as they were. Overvoorde said packing up those rooms was a major task that the college would like to avoid repeating.

Students have heeded the advice. Joe Ntayagabiri ’24 left for Thanksgiving to stay with family friends in Blaine, a suburb of Minneapolis — the pandemic made returning home to Kenya for the break too difficult, she said. Everything in her dorm is packed away in boxes under her bed in Dupre Hall.

“After settling down for a while at Mac, I kind of found a routine… having to move away from that again, I have just a feeling of annoyance,” Ntayagabiri said. “But now, because it’s happened so many times, it just felt dull. I’m kind of numb to it.”

The already-quiet dorms have been getting quieter over the last couple of weeks. Scharrer’s suitemate, who left for the break, left behind an entirely packed-up room.

“It looks like she was never even there,” Scharrer said. “It’s a little lonely.”

Mady Chen ’24, who has spent the semester living in Dupre, is making similar plans for her trip home to Taiwan. She’ll pack her room and leave everything here when she goes home.

Chen is hopeful that she’ll be back in January, but she said some of her friends aren’t feeling as optimistic.

“They firmly believe that we are not coming back [in the] spring semester, just because of how COVID is going right now,” Chen said. “I still have hope, and that would be the most ideal situation, but there are some people who are thinking, ‘I don’t think we’ll get to come back.’”

Bobbie Pennington ’24 left his dorm on Saturday, Nov. 28. One hectic day of packing, four flights and multiple COVID tests later, he made it back to his home in Eswatini on Tuesday.

The new announcement complicated Pennington’s break travel plans, too. He ended up packing everything up before he left.

“It’s kind of impossible to take all your things back if you’re an international student,” Pennington said. “I did take as much as possible, but of course, I couldn’t take everything.”

Overvoorde clarified that Macalester is still planning to welcome students back to the dorms on Jan. 19 as planned.

“This is a possibility, [but] it’s not something that we expect will happen,” Overvoorde said. “It is just kind of meant to remind people that things do remain unpredictable.”

So far, Macalester has weathered the pandemic without any major outbreaks that some other campuses have seen. For most of the semester, all of the college’s COVID cases were among off-campus students, faculty and staff. On Nov. 22, however, the college identified its first positive test from a student in the dorms. There are currently two students in isolation on campus.

Given the overlap of a spike in cases and end-of-semester travel, the college is taking some extra precautions as students leave campus. On Friday Dec. 4, Macalester is providing asymptomatic tests to students with saliva testing kits from the Minnesota Department of Health.

When it was scheduled, this testing date was encouraged for students — now, the tests are mandatory for anyone living on campus. The college chose that date to give any students who test positive a chance to complete the 10-day isolation before the dorms close on December 19.

For now, the initial plans for the start of the spring semester are still in place. This will look a lot like the start to the first semester — a 14-day quiet period without any in-person classes, followed by a slow phasing-in of more in-person activities if the Infectious Disease Task Force sees this as a possibility.

“Trying to launch things in a quiet, calm way is the hope for January,” Overvoorde said.