How we wrote the Spanish flu 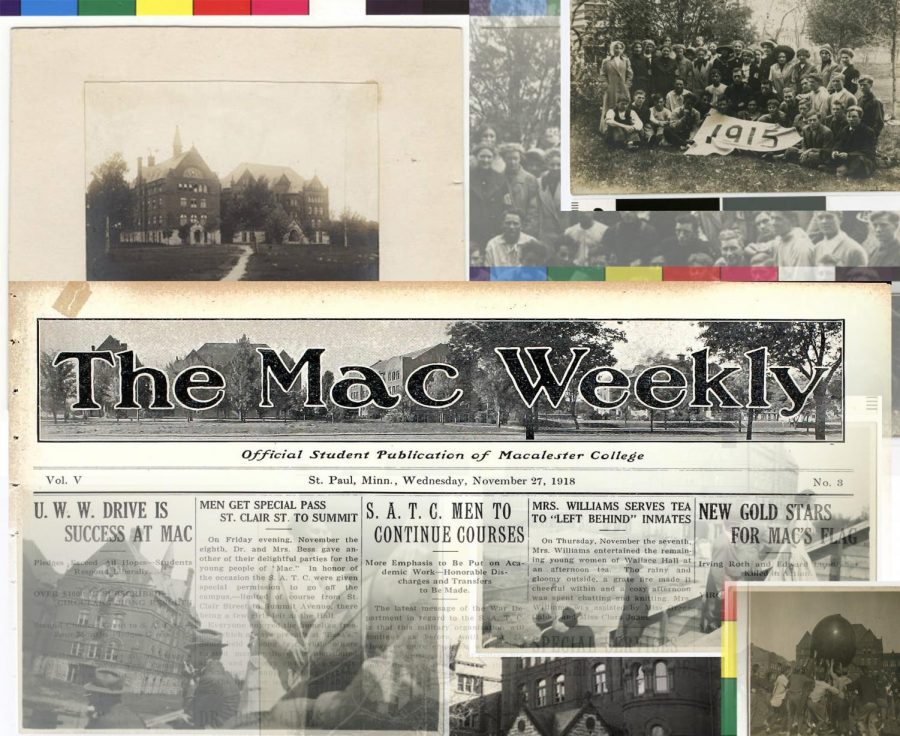 Spanish Flu in The Mac Weekly, Photo by Julia Bintz '24

The COVID-19 virus is novel, but living through quarantines and mass illness isn’t. On Nov. 5, 1918, the influenza pandemic forced Macalester to close. Over the following couple years, Macalester muscled through the Spanish flu pandemic. And, like we do now, students covered the flu and its effects in The Mac Weekly.

Writers gave advice on how to live through the pandemic. A piece published on Nov. 7, 1918 called for joy through the hardship. The piece’s title is “Come On, Smile!”

“It really isn’t that bad!” The Mac Weekly said. “The war can’t last forever, and the ‘flu’ will stop spreading, and quarantine will soon be a thing of the past and the sun is getting ready to shine so you see it isn’t such a bad world after all. Isn’t it surprising how we all think that we have more troubles than anybody else?”

On Dec. 18, 1918, The Mac Weekly published a piece called “Make It Count,” in which the writer said students should keep up with work despite the bizarre circumstances of 1918 and anticipation for winter break.

“This has been a hard year,” the article read. “Things have been different and constantly changing. On account of the ‘flu’ vacation, some valuable time was lost, but the fact remains that every minute must be made to count during the rest of the year. ”

In a piece titled “To Fight the Flu,” published on Feb. 18, 1920, a writer advised students to avoid getting sick by taking better care of their health.

“Macalester can be sincerely grateful that the ‘flu’ epidemic, although threatening, did not cut off any members of the family,” The Mac Weekly said. “Insufficient hours of sleep, abuse of the body through tobacco, over-eating, or exposure to the elements leave one unfit to throw off the disease when it comes.

“On the other hand, temperance, regular exercise, and care, if they do not actually ward off the disease, leave the body better able to withstand the ravages of sickness.”

Students in 1918 had to deal with more than the Spanish Flu pandemic. The U.S. was fighting in World War I during the same time. But off-campus and on the front, students were still thinking about the flu. In a recurring section called “War Correspondence,” student-soldiers exchanged daily news. In the Dec. 18, 1918 edition, writer Scottie McNiven mentioned the flu.

“I have been pretty lucky in escaping the clutches of the flu,” McNiven wrote. “Some of the fellows came down with it but the camp as a whole was fairly successful in combating it.”

World War I and the Spanish Flu pandemic made 1918 a grueling year for Mac students. But, Mac Weekly writers still wrote with humor. Alongside war poems, The Mac Weekly published jokes.

The section “Practical Proverbs,” published on Nov. 7, 1918, listed one-liners like “better late than absent,” “never study today what you can put off till tomorrow,” and “One girl living at home is worth two behind a quarantine sign.”

Professor Funk: “Compare the plague of ancient Greece with one of modern days.”

Doris: “One cause of the flu was that people were run down.”

Veva: “I must have been wound up then, because I didn’t get it.”

Every writer featured in The Mac Weekly wrote about the Spanish Flu in different ways – most of them more optimistic than what we read now. Still, there is a similarity across 102 years: Scots in 1918 made it through a pandemic and we’re making it through one.