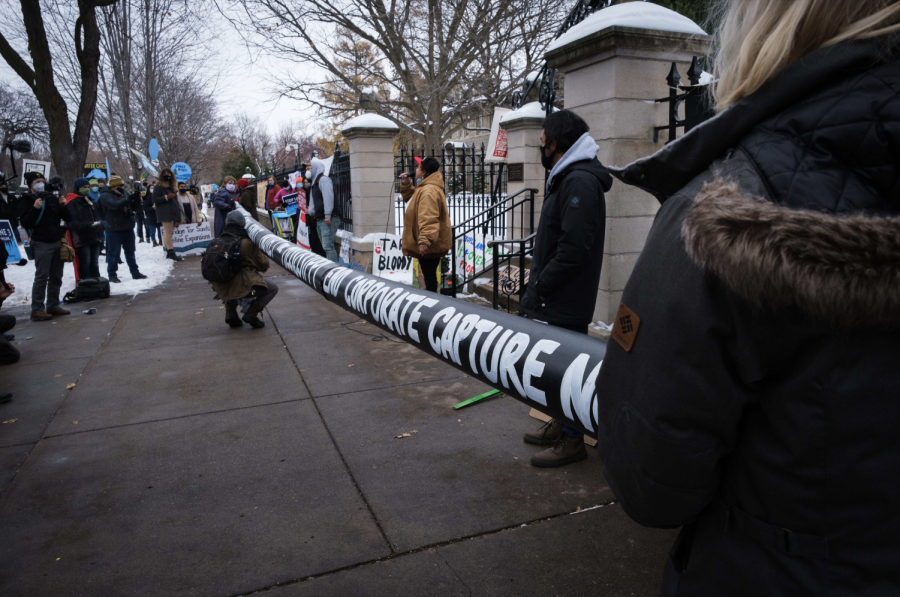 After six years of proposals, protests and legal challenges, Enbridge has secured the last permits needed from the state to finish constructing the Line 3 pipeline. Once built, the pipeline extension will carry nearly 800,000 barrels of tar sands per day from Alberta, Canada, to Superior, Wis., cutting across Anishinaabe treaty land and several watersheds in northern Minnesota.

On Thursday, Nov. 12, the Minnesota Pollution Control Agency (MPCA) approved water crossing permits for the Line 3 project. With these permits, Enbridge expects to begin construction in the next month.

In the past, Governor Tim Walz and his administration had been an ally of the Line 3 opposition. Walz has said that projects like pipelines need a “social permit” — a consensus from residents of the region affected. He was also critical of the pipeline’s environmental impact assessment and said that any pipeline on treaty lands was a “nonstarter.”

Just this past August, Walz’s Department of Commerce appealed the Minnesota Public Utility Commission’s approval of the project.

Back in August, MN350 activists gathered at the governor’s mansion to preemptively thank him for continuing that appeal. Last Saturday, hundreds returned — this time, to protest his administration’s approval of the pipeline.

Jo Vital, an activist from Red Lake, spoke from the steps of the mansion to the crowd that had gathered to picket.

Indigenous and climate activists in Minnesota have stood in staunch opposition to the pipeline since Enbridge proposed it in 2014. Several organizations, including Stop Line 3, MN350 and the Sierra Club have sounded an alarm at the environmental ramifications of the pipeline.

Climate activists have argued that the threat of an oil spill is too high to build the Line 3 project. A spill near the lakes of northern Minnesota could threaten sources of freshwater and wild rice growing regions.

Tar sands extraction in itself is also especially bad for the environment — the process gives off more greenhouse gas emissions than the process of extracting conventional crude oil.

On Nov. 16, 12 out of the 17 members of the MPCA’s Environmental Justice Advisory Group (MPCA) announced their resignation in protest of the decision to allow Line 3 to move forward. Their resignation letter criticised the pipeline’s environmental risks, the danger of spreading COVID-19 in a large-scale construction project and the route’s violation of Indigenous treaty rights.

“The decision to approve the permit sends a clear message that the Walz Administration and the MPCA hold no regard for the well-being of Minnesotans or our relatives around the world, who depend on us to dramatically, rapidly, and justly transition our economies away from fossil fuels,” the letter reads.

Indigenous groups have been vocal in the fight against Line 3, protesting its route through reservations and treaty land, the environmental threat to waterways and the threat of increased sexual violence that pipeline construction camps bring.

Several speakers at Saturday’s protest highlighted those threats to Indigenous peoples, connecting Line 3 to the centuries-old history of colonization and state violence.

“This decision was not made with science,” Vital said. “It was made through white supremacy upholding genocidal policies that have always been sanctioned by the state, whether it’s forced removal, whether its putting our children in boarding schools or whether it’s putting a pipeline through our lands.”

Taysha Martineau, an activist from the Fond-du-Lac reservation, spoke specifically out of concern for how the construction of this pipeline might exacerbate the Missing and Murdered Indigenous Women epidemic. Martineau gave an emotional speech on behalf of her children.

“As an Indigenous woman the statistic I am faced with is one in three,” they said, referencing the number of Native women who experience violence in their lifetimes — though some research has estimated that number at more than four in five.

“I have three daughters at home… which one?” they continued. ”You have buried us beneath this pipeline.”

Although anger and frustration with Walz were abundant on Saturday, protesters sent a clear message that this was not the end of the fight.

Emma Harrison ’21, who introduced the speakers, encouraged attendees to pressure Minnesota Attorney General Keith Ellison to make an effort to block the pipeline.

And even once the legal means to challenge the pipeline are exhausted, activists plan to physically block construction. Again and again, speakers at the governor’s mansion invoked Standing Rock, where Sioux activists in North Dakota engaged in a months-long standoff in protest of the Dakota Access Pipeline.

Protests of the pipeline have already appeared in northern Minnesota. On Wednesday, Nov. 18, Betsy Foy ’22 and another activist chained themselves to Enbridge’s construction equipment in Hubbard County, shutting down construction for a day. Both were arrested and were released on Thursday.

Martineau didn’t want it to come to this, but at this point, they don’t see an alternative.

“The world remembers Standing Rock,” Martineau said. “That’s what the future looks like at this point for me and my children and all of us who are living in opposition.”

Martineau and other speakers implored the protesters to get boots on the ground for that fight, no matter what it looks like in the coming months.

“We need you to show up,” Vital said. “Support the front line resistance, and be ready, because it’s gonna be a fight.”