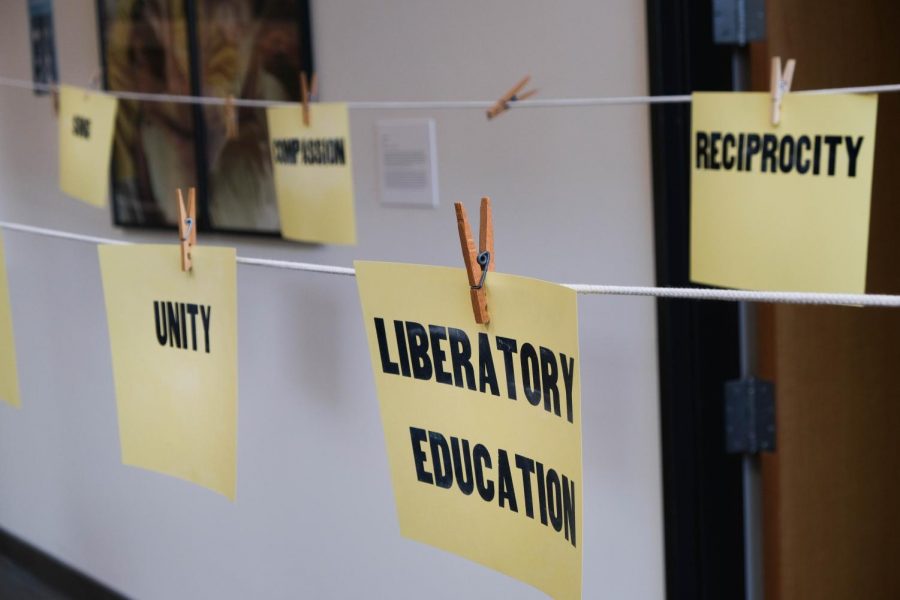 Prints answering the question 'what do we want' are hung from a clothesline in Janet Wallace. Photo by Malcolm Cooke '21.

On Nov. 12 and 13, Macalester’s Kofi Annan Institute for Global Citizenship (IGC) hosted its 27th annual International Roundtable (IRT). The event invited outside speakers and members of the Macalester community to discuss this year’s theme, “Facing Pandemics of Disease and Race: Radically Rethinking For Liberatory Futures.”

Programming included a plenary panel discussion titled, “State of Emergency or State of Opportunity? Tools and Practices for Self Determination.” The conversation featured four scholars and activists: Hubert Humphrey Distinguished Visiting professors Cecilio Ortiz García and Marla Pérez Lugo, the Director of Neighborhood Engagement and Learning at Confluence Studio Duaba Unenra and Quito Ziegler ’98, a professor of humanities at the School of Visual Arts and co-founder of Mutual Aid NYC.

Discussion and reflection groups, hosted by Macalester students and faculty, followed the plenary discussion. The second day of programming featured an event hosted by art and art history professor Ruthann Godollei titled, “What Do We Want? Printing the Future.”

“The second day was about using art as a form of expression to, in a way, show what you are taking [from IRT],” said anthropology professor and associate IGC dean Olga González.

This year’s IRT was distinct from years past — there were far fewer panels, no student-led workshops and took place entirely over Zoom.

“I think the really interesting thing about the process this year started when COVID hit,” said IGC dean and American studies professor Donna Maeda. “Everybody was talking about it, but not everyone was talking about it together. [IRT] started to grow really organically, and even outside of the Twin Cities.”

Originally, the IRT’s topic was set to be global protest. The organizing committee adjusted the theme after the coronavirus drastically altered the campus environment. The new theme, alluding to the concept of “dual pandemics” of racism and COVID-19, drew scrutiny from students when the committee announced the updated topic in spring.

The unusual mode of delivery allowed for the IRT committee to think more creatively about the speakers invited, beyond the conventional academic format.

“Personally, I didn’t know them,” Maeda said. “Very early when we came back to campus this year, someone said, ‘Have you gotten a chance to meet the two Humphrey scholars yet? They’re talking about the work they do in Puerto Rico in relationship to colonialism.’ Then we got to meet them and had these amazing conversations with them.”

“The other two speakers we had been connected with [were from] Confluence Studio at the corner of Chicago and Lake,” Maeda said. “They’re having similar conversations from different directions.”

“One of the things I became more aware of over the summer is the Indigenous post apocalypse framing [that the] world is already over,” Mergenthal said. “The world ended in 1492. The world now is completely unrecognizable… In that sense, the apocalypse has already happened and we are still surviving it. That came into light as something I wanted to talk about this year.”

This year’s IRT was Mergenthal’s third involved with the event. They acknowledged the unique challenges posed by a digital format.

“Normally, you’re physically going to different spaces and feeling different ways,” Mergenthal said. “I think participation and engagement were decreased because of that. I think there was also less back and forth with the speakers. There is less opportunity to respond directly, because people want to respond broadly to everyone.”

Although the IRT was shorter than years past, it expanded on two summer webinars series, “The Pandemic of Anti-Blackness” and “Untangling Racial Politics and Ontologies: Local and Global Antagonisms and Possibilities.” Prior to the roundtable, the IGC hosted reading groups both on campus and in collaboration with the Avalon school, a community partner in St. Paul, on Octavia Butler’s “Parable of the Sower.” The IGC also launched an ongoing project that invites students and faculty to engage with the event’s key framing questions called Challenging Complicities.

“This IRT appears for two days, but it’s really decentralized because there’s a book group, because there is work with Avalon and then we have Challenging Complicities,” González said. “It’s more about the process than about the end product.”