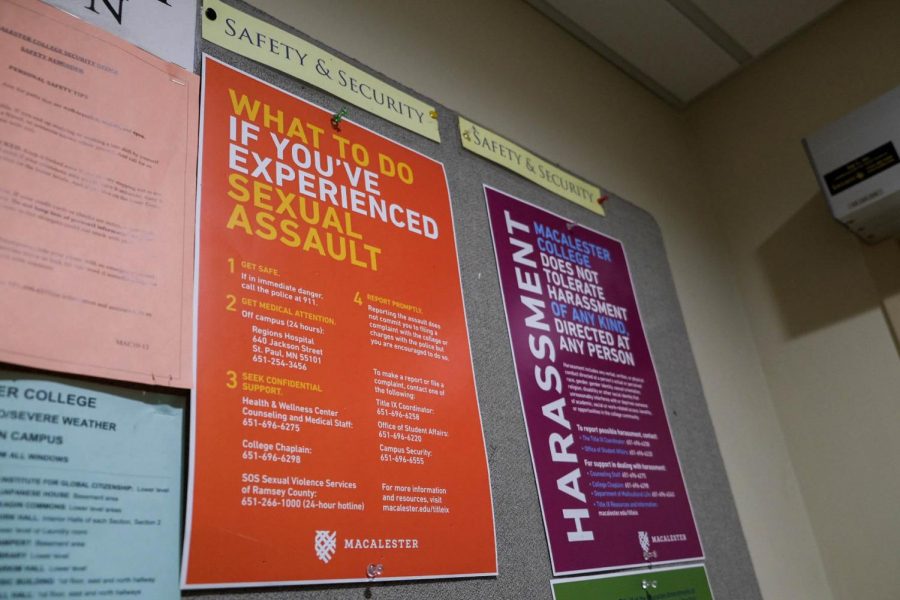 Please be advised: This article contains discussion of sexual assault, harrasment and the Title IX process and office.

The report resulted in the resignation of Title IX and Bias Harassment Coordinator Timothy Dunn. The office saw a series of interim directors before making a full-time hire in April 2020: Regina Curran, former Title IX Program Director at American University. She acknowledged in a Mac Weekly interview last April that “building trust is going to be a significant part of the job.”

Curran’s commitment to building trust with students was put to the test on Nov. 4 when Ciara Moore ’21 tweeted a grievance with Title IX and tagged President Suzanne Rivera’s official account.

“Love realizing that I will never feel safe or comfortable at Mac again,” read Moore’s tweet. “Recetly [sic], the person who sexually assaulted me last year has been given a prestigious award, invited to be a panelist on a webinar with @MacalesterPres, and repeatedly praised for being a great leader.”

According to Moore, the panelist was found responsible for a Title IX policy violation in February 2020. The tweet prompted an email campaign led by Moore that called on the college to take action to prevent students and alumni with Title IX complaints on their record from holding powerful positions on campus.

“The burden of revoking access to spaces for those who have committed sexual assault should not fall on the shoulders of survivors, but on the Title IX office and school administration,” the email read.

Following the email campaign, organizers removed the alum from the webinar panel and revoked their award.

According to Curran, there is still no current written policy on screening student leaders or alumni for Title IX complaints before making most student hires, granting awards or inviting speakers. Curran said that Residential Life and the Office of Student Leadership and Engagement (OSLE) screen students before hiring them as Resident Assistants or Orientation Leaders. But as recently as 2018, this was not the case.

The Mac Weekly reported in fall 2018 that a student with a Title IX complaint was hired as an Orientation Leader. After students who knew about the Title IX complaint reported it to OSLE Director Laurie Adamson, the student lost their position. Following the incident, a group of college administrators began drafting a policy asking that student employees and leaders are vetted by Title IX before assuming their positions.

But in spring 2019, once again, a student with a Title IX complaint was hired as an Orientation Leader for the coming fall. The controversy surrounding the hire contributed to Dunn’s departure in April 2019.

Moore said that, following her tweet, she talked to both Curran and Rivera about Title IX background checks going forward.

“In an email addressed to me, the Title IX coordinator said in the future, panelists are going to be subjected to more background checks,” Moore said.

Curran sent out an email on Wednesday morning reminding staff and faculty to inquire about student disciplinary history when hiring students for preceptor positions, as well as inviting students or recent alumni to speak on campus-wide panels. Title IX checks are expected but not mandatory in these cases, according to Curran, but she believes that most faculty and staff will follow through. The Clery Act mandates that colleges in the U.S. keep records of on-campus crimes, including sexual assaults, for at least seven years, so recent alumni can be screened prior to returning to campus.

“Recently it has come to my attention that there is a gap in checking student disciplinary histories as it relates to Title IX concerns,” Curran wrote in the email.

Despite Curran’s recent efforts to bolster Title IX background checks, students believe that the Title IX office is not a supportive place for survivors of sexual assault on campus.

Em Hayward ‘21, who is currently on a leave of absence from Macalester, said that they have experienced two sexual assaults since arriving at Macalester in fall 2017. After having an unpleasant experience with the Title IX office reporting their first assault, they chose not to report their second assault to the office.

“The only thing worse than being raped by a good friend and classmate is going to Title IX to report it,” Hayward said.

Hayward also said that because of the revolving door of interim and permanent Title IX directors over the past years, they believe that some records of past Title IX complaints have been lost in the mix.

While Dunn told Hayward that Title IX would inform them if the office found out that the accused person was in the Mac-Groveland area, they later learned from former Title IX interim director Dion Farganis that the Title IX office does not have the ability to do that. According to Hayward, the Title IX office also seemed to have no record of the conversation between Dunn and Hayward where he offered to inform them about the student’s presence.

Farganis could not be immediately reached for comment. Dunn, when contacted, referred questions to Curran.

A Macalester alum also told The Mac Weekly that the college appears to have not retained a record of their complaint. After seeing Moore’s tweets, the alum reached out to Curran to ask if the Title IX office had a record of their complaints against another alum — the subject of Moore’s email campaign. According to the alum, Curran could not find records of the anonymous alum’s complaints, which were filed in 2016.

All three of these students also reported that, when bringing their complaints to Title IX in the past, they were discouraged from going forward with an investigation or told that an accused student’s conduct did not warrant action from the Title IX office.

Curran said she would not consider discouraging students from taking formal action against people that they accuse of misconduct.

“I really view my role as a neutral, as like, my job is to present you with all of the options to make sure that you understand those options and then to support whatever follow-up you choose,” Curran said. “No, I do not foresee myself discouraging anybody.”

She also said that she has a three-fold plan to rebuild trust between students and Title IX. Curran said that she is committed to reviewing Title IX policies every spring and will invite students, staff and faculty to give feedback about Title IX policies and procedures. The office has also established a Campuswide Advisory Council on Sexual Misconduct and Harassment consisting of students, faculty and staff who will meet on a semi-regular basis to discuss sexual violence education and trends on campus.

The third part, which Curran calls the “slow” work, is making sure that students interacting with Title IX have a positive experience with the office.

“It has absolutely been my experience at past institutions that students would come to me and say ‘the reason I reported is because my friend reported and they felt like they had an OK experience and were able to get access to things that they needed,’” Curran said.

Although Moore remains skeptical of Title IX, she said that President Rivera has been supportive in responding to her complaints. Moore is meeting with Curran and Rivera on Friday to discuss future Title IX procedures.

“She … reached out to me and said that she’s so sorry this stuff happened,” Moore said. “It feels like she has my back.”