Protest on I-94 ends in five hour standoff, hundreds of arrests 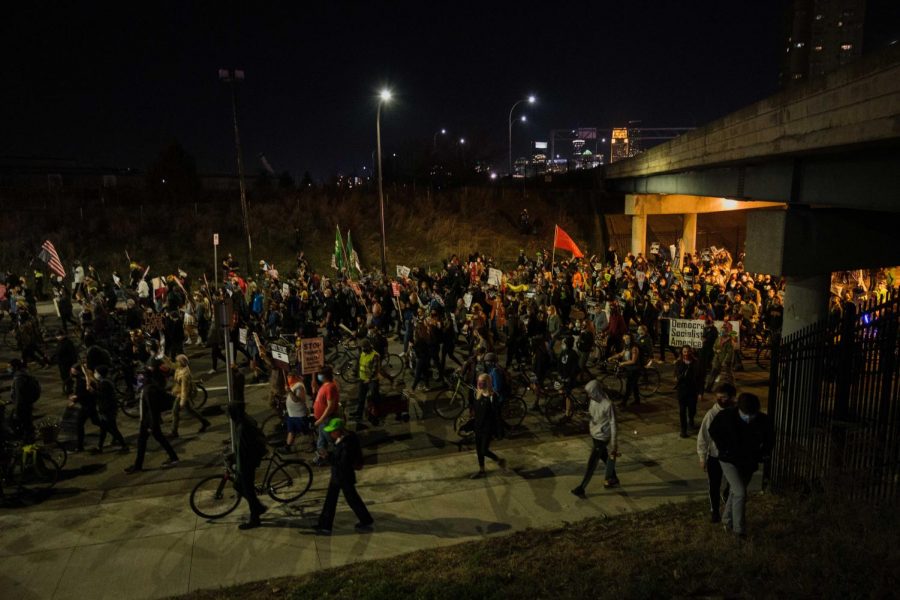 Minnesota State Patrol trapped more than 600 protesters including roughly a dozen Macalester students on I-94 Wednesday night, engaging in a standoff that lasted about five hours. Police arrested hundreds, charging them with public nuisance and a fine for being a pedestrian on a highway, but released most with citations.

Protesters were demanding every vote be counted in the presidential election and calling for community control of the police. Twin Cities Coalition for Justice for Jamar (TCC4J), the Saint Paul Federation of Educators and more than 30 other organizations co-hosted.

The protest began in front of Mayday Books on Cedar Ave. at 6 p.m. with a rally including speeches from the organizers. While one of the focuses of the protest was denouncing President Donald Trump’s fraudulent claims of electoral victory, organizers stressed that electoralism will not solve the inequities built into American society.

“The message tonight is that there was no option for a large portion of America, especially people who were part of marginalized communities,” DJ Hooker of TCC4J told The Mac Weekly. “Having a choice between someone who is complicit in systemic racism and also helped prop it up… and someone who’s actively calling places in Africa shithole countries — it’s not a real choice for me as an African American, as a queer African American living in America.”

“We are still going to be fighting regardless of who’s in the White House,” Loretta VanPelt of TCC4J said. “Marching and being out in the streets is the only way… Voting may help but it’s not the answer.”

After a separate march to protest Trump’s treatment of the election led by Reclaim the Block arrived at Mayday Books, demonstrators from both rallies began to march through the Cedar-Riverside neighborhood of Minneapolis. Hundreds of people filled the street, including children in wagons and elderly people. Onlookers in nearby apartments and on restaurant patios cheered as the march passed.

The atmosphere was festive. Organizers led chants and played music out of the back of a van. Some protesters played marching band drums.

That all changed quickly when organizers, many in cars and motorcycles, took the protest up an onramp onto I-94.

Minnesota State Patrol and protest marshals blocked eastbound traffic behind the exit as protestors walked onto the highway. Police cruisers then moved to block the ramp behind protesters as the group marched toward St. Paul. Overhead, a police helicopter swept a searchlight over the crowd, lighting up the scene in flashes.

It was less than a half mile on the interstate before it became clear that police were blocking the highway ahead of the protest too, kettling the march in. Organizers announced their intent to leave I-94 and directed protestors to move toward the nearest offramp, less than 100 yards away, but State Patrol soon shut down westbound traffic as well and dozens of police in riot gear flooded onto the highway, blocking the exit.

Once the protest was surrounded, police announced that all participants were being placed under arrest for public nuisance and unlawful assembly. They demanded that everyone sit down where they were. Protesters refused.

According to several Macalester students who were at the protest, police began arresting people almost immediately. First, they let children and their families off the highway. Then, they began taking protesters one by one. Every time an officer arrested someone, the remaining crowd cheered. Eventually, the police began removing larger groups of people, transporting everyone away from the scene on busses and scattering them throughout the city.

“At first, [the crowd] was very anxious,” one student who was arrested said. “Then, someone was like, ‘Well, they’re going to arrest all of us, we might as well have a dance party.’ Someone pulled out a speaker and we all danced for five hours.”

The students who spoke to The Mac Weekly were some of the last people to be arrested at approximately 1 a.m. They were not offered food or water by the police or given a place to use the bathroom.

They also reported that most officers, both on the highway and after, were not wearing masks, and that an officer on their transport bus was not wearing a mask and refused to put one on upon request. Such conduct would violate Governor Tim Walz’s July executive order mandating individuals wear masks in public indoor spaces unless they are alone.

One of the students remarked that she was surprised the police were willing to arrest so many people. She was arrested at a different protest in a much smaller group of about 50, and even then the police lacked the resources to process everybody.

“Usually it’s safety in numbers,” she said. “But [the police] just had unfathomable numbers.”

Right now, the students who spoke to The Mac Weekly are unsure what they will do next, though they are looking to get in touch with other arrestees and plan to contact lawyers with protest expertise.

As the standoff unfolded on the highway, Ninth St., which overlooks I-94, became a secondary protest location. MPD and ten mounted officers pushed bystanders and protesters who had left the highway across the street, preventing them from viewing the standoff. Mounted officers used their horses to chase people off, crowding one bystander against a parked car.

The majority of bystanders on this street were residents of several adjacent apartment complexes.

“[The police] wouldn’t be here if we were Trump supporters,” one resident said. “The only reason they’re here is because this is a Black community.”

People shouted at the officers stationed there, yelling “get those animals off those horses” and “all cops are bastards.” Police tried to use bright, strobing lights to turn protesters away, to which the protesters responded by shining their own flashlights and phone lights at the police.

Officers on Ninth St. threatened force throughout the evening, pointing pepper spray canisters in the face of protesters and aiming less-lethal weaponry at people walking down the street. Later in the night, sometime after 10 p.m., MPD used pepper spray to clear bystanders off Ninth St..

In the days since, Minnesota State Patrol has stated “no force or chemicals” were used on protesters.

Kori Suzuki ’21 contributed to the reporting of this story.