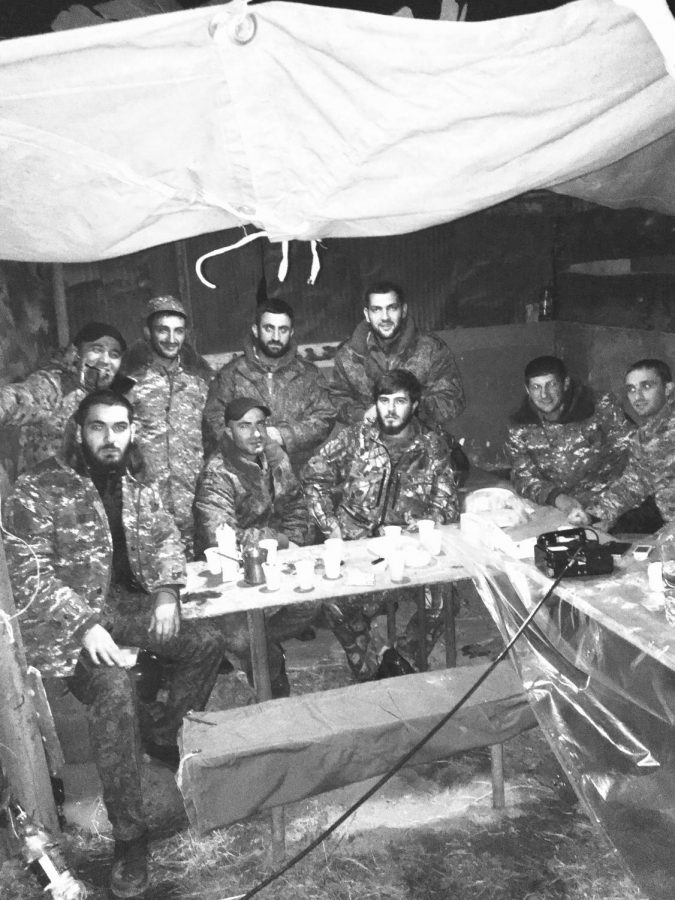 Gugo Babayan ’24, a first-year student from Armenia, currently lives in Meghri, an Armenian town near the border of Iran. His life has been completely altered by the ongoing conflict between Armenia and Azerbaijan over the Nagorno-Karabakh region, a disputed territory that is internationally recognized as Azerbaijani but has deep ties to Armenia.

On Sept. 27, 2020, an armed conflict over the territory broke out and has gripped the area since. The conflict is the most recent result of a complex and violent historical dispute over Nagorno-Karabakh and a history of ethnic tensions between Armenians and Azerbaijanis. There are likely over a thousand casualties, including dozens of civilians. The war has displaced approximately 90,000 people, more than half of the region’s residents.

“Now I am kind of used to the situation, but for the first few days I was in shock,” Babayan said. “That kind of thing has never happened in my life before. One morning, my mom woke me up and said that war had started in Nagorno-Karabakh.”

When the war broke out this past September, Babayan voluntarily signed up for the Armenian army on the first day of the conflict.

“I saw the entire male population in my town, everyone from age 18 to 55, go to the military checkpoint to sign up for the army and go to Nagorno-Karabakh,” Babayan said. “All my friends were among them and I felt a moral duty to join them.”

Babayan frequently goes to the line of contact and stays with people. He is prepared to assist in protecting residents if an emergency situation arises. Babayan said he is proud of the unity and camaraderie shown on the line of contact. He mentioned that everyone has forgotten about their daily duties and problems — everyone is living, eating, sleeping and joking together.

Nevertheless, the tragic tolls of this war are always present in Babayan’s mind.

“I am both proud of my country that shows unity and also very sad seeing the number of human losses and finding among them people that I was familiar with,” Babayan said. “Most of the people who are dying were born in 2000 and 2001: my peers.”

The average age of those lost in the conflict is about 20.

College alone is an exhausting ordeal for most students. Babayan has to balance being a full-time student with living and serving during an armed conflict. Ultimately, most of his attention has to go to the conflict. It has become a part of his daily life and is constantly on his mind.

“This war has also taken all of my energy because I’m always focused on what is going on at the line of contact, so it’s very hard to focus on academics or my family, because all my thoughts are with the soldiers,” he said.

Babayan says his professors have all worked with him to figure out a plan for his schoolwork. He says they have been very understanding and supportive of his situation.

“I am very glad that two of my professors, Professors [Adrienne] Christiansen and [Andrew] Latham, understood my situation,” Babayan said. “I had one or two weeks off. Now I’m catching up on everything.”

Nagorno-Karabakh is predominantly populated by Armenians but also had — at least during the Soviet era — a sizable Azerbaijani population, according to International Studies and Russian professor James von Geldern.

Joseph Stalin led the Soviet planning process that would result in the creation of the Azerbaijani Soviet Socialist Republic and the Armenian Soviet Socialist Republic. Von Geldern noted that Stalin was Georgian, so the status of these states were important to him. Although bothArmenia and Azerbaijan were parts of the Soviet Union, they had a high degree of autonomy.

According to von Geldern, the Soviet-era territorial divisions showed little regard to ethnic populations. This has had huge consequences for the region and is central to the current conflict.

“You have large ethnic populations trapped behind borders of ethnic states that are not their ethnicity,” von Geldern said.

In 1988 an independence movement began in the heavily Armenian-populated Nagorno-Karabakh region, aiming to separate itself from Azerbaijan. Growing ethnic tensions created the conditions for violent conflict to erupt.

“At some point early in 1988, the Armenians in Nagorno-Karabakh began to assert their right to be either independent of Azerbaijan or to join up with Armenia,” von Geldern said.

Relations between Armenians and Azerbaijanis only deteriorated after this, eventually leading to war.

“There became a period of significant ethnic tensions between Azeris and Armenians within both Azerbaijan and Nagorno-Karabakh that ultimately led to riots, massacres and eventually armed conflict,” von Geldern said.

Sporadic but violent armed conflict continued until 1992, at which point the Soviet Union had collapsed and both Azerbaijan and Armenia were states. This escalated the conflict to a full-scale war, according to von Geldern.

This semester has been an emotional roller-coaster for Babayan: anger, anxiety, pride and sadness. But if there is any sentiment he wants to leave others with, it is to care more about what is going on in Nagorno-Karabakh.

“I am always on my phone checking if there is any news and I’m always disappointed to see, for example, that the fly over Mike Pence’s head has more attention than thousands of people dying here,” Babayan said.

He expressed a deep frustration with what he sees as the lacking salience of the conflict in the international community. Babayan sees his personal experiences as unimportant in the face of a much larger conflict and urges others to take the time to learn about the conflict in Nagorno-Karabakh.

“I would appreciate it more if the faculty and students took time to understand the conflict rather than my personal situation,” he said. “I am really disappointed by seeing that few people are reacting to this.”

“We all have become soldiers.”