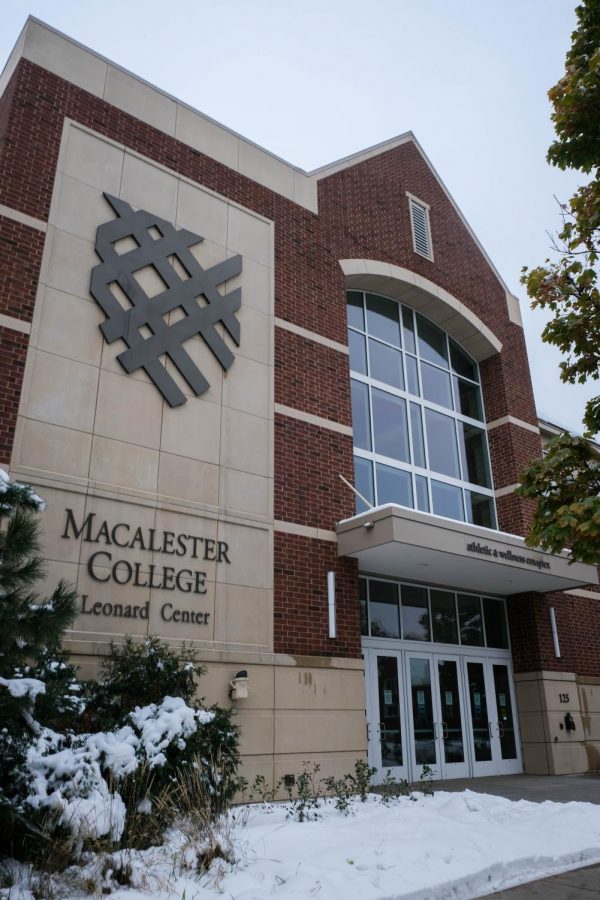 On Oct. 2, Macalester Athletics announced that Gabrielle Brown would be joining Macalester as a full-time assistant coach for the track and field program. Brown will work with the sprinters, jumpers and hurdlers.

She joins Director of Track and Field and Cross Country Dan Schofer and assistant coach Karly Brautigam during an uncertain time in college athletics. The Minnesota Intercollegiate Athletic Conference (MIAC) has suspended all competition until at least 2021 due to the coronavirus pandemic, and Macalester’s athletics programs returned to in-person practice on Sept. 17 after the quiet period expired.

Despite the decidedly abnormal circumstances of this year, Brown, a former All-American hurdler at Hamline University, is excited to join the Macalester program and is already beginning to make connections on campus, already meeting students on the team and other coaches in the Leonard Center.

“In some new places sometimes, people are being nice just because, but it feels genuine, it feels authentic,” she said. “And also, I just know the kind of people that Macalester helps develop for our community and for our world — none of those people are bad people at all.”

Brown comes to Macalester at a time when the track and field program is revamping and restructuring. The program has relatively few hurdlers, sprinters and jumpers. Schofer hopes Brown will help change that.

“Looking at our team currently we have a lot of distance runners,” he said. “Our numbers aren’t as good in the sprints, jumps, hurdles events, so to me that’s one of the biggest reasons it made sense to kind of switch resources a little bit that way.”

Brown hopes she can bring a new level of competition to the Macalester track and field program. Brown herself was a high-level athlete and won six MIAC titles during her time at Hamline. She ended her track and field career with a fifth place finish in the 100-meter hurdles at the NCAA Division III Outdoor Track and Field Championships in 2019.

Macalester’s track and field program has had individual athletes win national titles, most recently Phoebe Aguiar ’19, who won the NCAA Division III national championship in the 800-meter dash during the 2019 indoor track and field season. Schofer and Brown are hoping to grow their number of national titles while maintaining the academic rigour Macalester is known for.

Right now, though, Schofer is focused on getting the teams through the added stress of the pandemic and ensuring student-athletes are taking care of their mental and physical health — especially with no competition at least until 2021.

“Everyone is just under much more stress, so we’re hyper aware,” he said. “That is really, short-term, our goal for the program. Yes, we want to keep training and keep working together as a team, but we also want to keep morale high and keep mental health in a good place and be able to keep ourselves physically healthy.”

Schofer thinks Brown is an ideal addition to the program right now, in part to help with these short-term goals. It was Brown’s ability to connect with student-athletes in the hiring committee which stood out and ultimately led him to hire her.

“She just connected with our athletes super well, so… being another great resource for our team members will be awesome,” Schofer said. “[She will] just be another person that will be a role model and leader.”

Brown can connect with the athletes on many planes. As a 2019 Hamline graduate, she likely competed against some of the current junior and senior track athletes at Macalester. She’s also from St. Paul, and hopes that connection will help with recruiting.

“As someone who grew up in the Twin Cities, I went to a high school that wasn’t as funded and whatnot,” Brown said. “So I am so extremely grateful that I am now in a position where I’m able to look back into my community and find other Gabrielles that are just like me and to be able to provide the opportunity to go to college, and not only go to college, but to graduate from college as a student-athlete.”

Her motivation to coach also stems from a love of teaching, which she attributes to the women in her life who worked in education; Brown majored in education and communications at Hamline. While at Hamline she had the opportunity to work in both a public and private school in St. Paul. Seeing the disparities and politics at work in the public and private education system in the Twin Cities led her to find a different way to continue to teach.

“I’m still a teacher but just on the track and not a traditional classroom setting,” Brown said. “The biggest reason for me wanting to be a teacher was so I can impact the lives of students in a positive way. I’m still able to do that with track and field.

“I get to be a part of these students’ lives as they’re getting ready to create an image for themselves, as they try to figure out who they are, while competing in something that they love to do,” she continued.

Though both coaches think an indoor season in the spring is unlikely at this point, they’re hoping there will be at least one season where student-athletes can get on the track and do what they love. Regardless, Brown is grateful to be at Macalester and can’t wait to begin giving back to her hometown.

“When I first went to college, it was my first time ever having a woman coach, but now I’m like ‘okay, someone can come to Macalester and have a woman coach that’s…  also Black too,’” Brown said. “And so I’m grateful in that regard that ..we’re slowly getting more Black and Brown people in the world of track and field. So I’m excited to be a part of history in the making.”