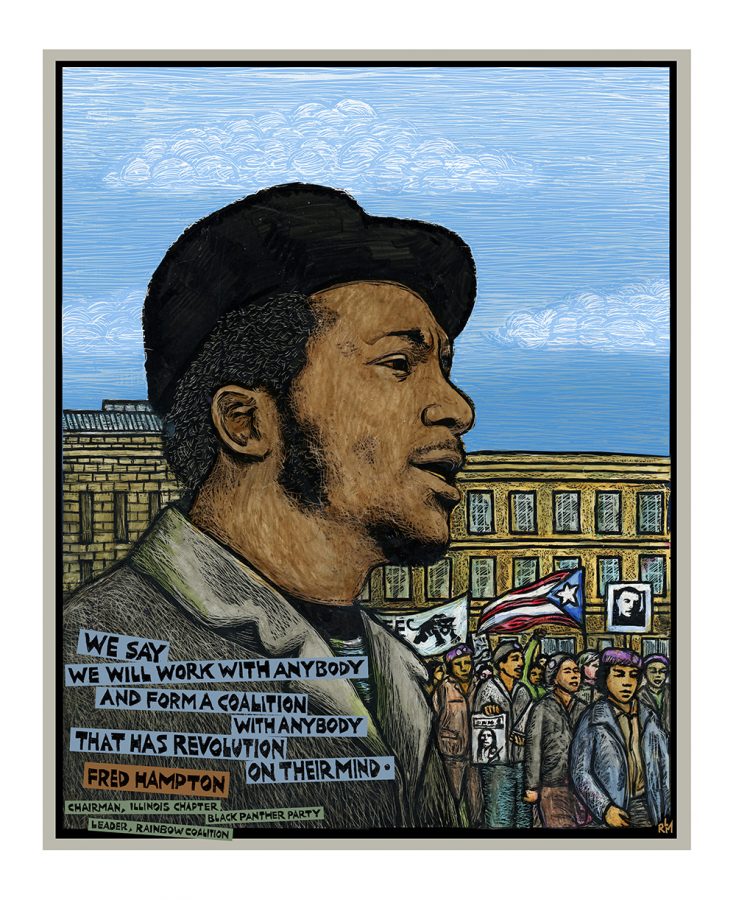 On Thursday Oct. 15, Hana Dinku, director of diversity education, leadership and inclusion at Macalester College’s Department of Multicultural Life (DML), hosted a synchronized screening over Zoom of PBS Independent Lense’s documentary “The First Rainbow Coalition.” Following the screening, Minneapolis-based printmaker and political activist Ricardo Levins Morales, who had taken part in the movement in the late 1960’s, took part in a question and answer session with Dinku.

The police assassinations of YLO member Manuel Ramos in June 1969 and BPP leader Fred Hampton in December increased protests and Coalition demands against the Chicago police. The media portrayed the three groups as gangs but they continued community welfare through 1973.

“We can change ordinary society through collective action,” said historian Johanna Fernandez in the film.

After the film screening, Dinku hosted a talk with Morales, with Wanda Barradas ’21 asking the artist questions about his life, work and participation in the Rainbow Coalition.

Morales grew up in Puerto Rico farming in the mountains and moved to Chicago with his parents in 1967. He was suspended in grade seven for organizing a student walkout and dropped out of high school at 15. After leaving school, Morales started making posters for the Black Panther Defense Committee in Chicago, reading the Young Lords’ newspaper, working in the Black Student Union and farming in New Hampshire.

“After high school I dropped into the arms of people restoring this sense of power, telling traumatized people a different story about themselves, a story of resilience,” Morales said.

Throughout the interview Morales emphasized the fundamental issue of unity.

“Solidarity basically means that we are all in this together and are acting on that,” Morales said. “I am describing solidarity not as a transaction but as a value. I’m supporting you because doing that supports me. We need to be in the struggle together in bottom-up grassroots politics.”

Morales referenced the Northland Poster Collective, Ella Baker and Bob Moses as some of his influences.

“I would draw caricatures of people in the newspapers,” Morales said. “I became very good at drawing white right-wing men.”

Morales has made portrait prints of civil rights activist Angela Davis, art about coffee from Ethiopia and a portrait of Trayvon Martin, among many other works for social justice.

Morales discussed the need to create art about the world we live in as a way to deepen solidarity and representation. As an artist,  Morales tries not to appropriate culture or commodify identity, instead working to depict everyone with dignity.

“I don’t believe I’m entitled to tell people’s stories, I am obligated to,” Morales said. “Every person is brilliant inside. We have a need to be seen, heard and recognized. Dignity is the foundation.”