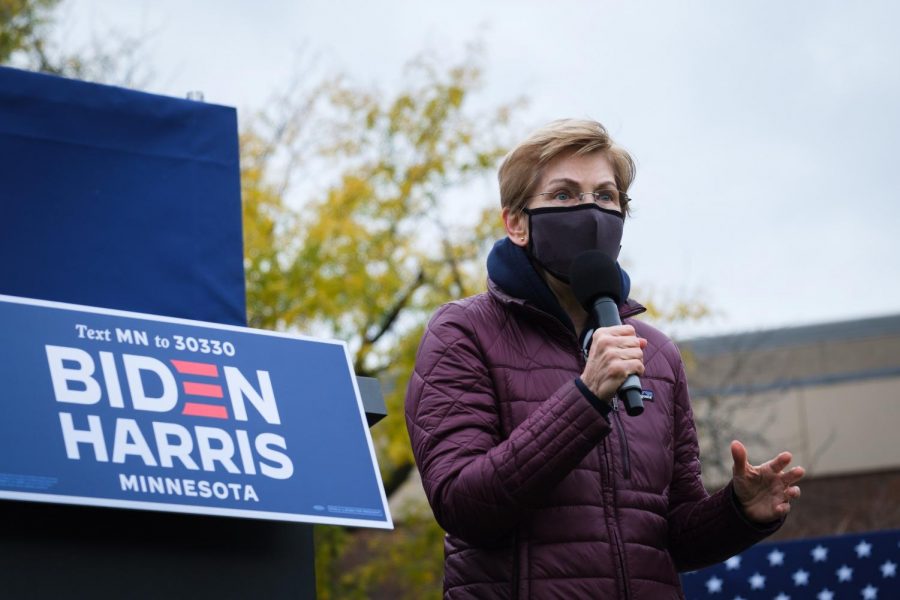 Elizabeth Warren addresses the crowd at a Get Out the Vote Rally on Shaw Field on Sunday, October 1, 2020. Photo by Kori Suzuki '21

On Sunday, Oct. 18, Senator Elizabeth Warren (D-MA) took the stage on Macalester’s Shaw Field as part of a Minnesota for Biden Get Out the Vote (GOTV) event. Warren visited Macalester for a rally in August 2019 when she was still a front-runner for the Democratic nomination.

Warren made several appearances at Minnesota colleges on Sunday to campaign for Biden, from Northfield to Brooklyn Park to St. Paul — all outdoor, socially-distanced gatherings despite temperatures dipping below 45 degrees.

Event registration was open to 125 members of the Macalester community, and students got priority to sign up. The event was officially announced Saturday afternoon in an email to the student body, but co-organizer Sami Banat ’24 posted the details on his Instagram account Friday evening. Banat, who volunteers frequently with the Minnesota DFL, helped organize Sunday’s event.

“Young people are going to be the deciding factor in this election, especially in Minnesota,” Banat said. “So [the GOTV event] is about getting to campus where we know we can get a good turnout for Joe Biden, and make sure we have people energized and ready to actually get out to the polls.”

Before Warren gave her address, Macalester Democrats Chair Alex Jacobson ’22 spoke, as well as Minnesota State Representative Kaohly Her (DFL-St. Paul) and Minnesota DFL Chair Ken Martin. They all echoed the high stakes of the election and implored students to make a voting plan.

Warren’s address framed the 2020 election as a referendum on Trump’s record as president and criticized his actions on the coronavirus pandemic, systemic racism, climate change and other issues.

“Eight months into this crisis, and Donald Trump and his administration still have no plan for how to deal with the coronavirus,” Warren said. “And that is why, on November 3rd, we will hold Donald Trump accountable.”

At one point during the rally, Warren asked everyone who had already voted to raise their hands, and then asked the same to those who hadn’t yet. She pointed out the several hands that went up in the back.

“You guys, take names,” Warren said. “We’ve got two here, a couple in the back, I know why you’re in the back. I used to teach school, I always pay attention to the back!”

Warren also incorrectly stated that Macalester has a 100% voter registration rate, a statistic that she said came from a conversation with Macalester President Suzanne Rivera before the event.

Rivera later clarified via email that what she told Warren was that several athletic teams at Macalester are challenging each other to achieve 100% voter registration on their respective teams.

Katie Chin ’22 attended Warren’s event yesterday. Chin is currently working to re-elect Minnesota State Rep. Shelly Christensen (DFL-Stillwater), who won by less than one point in the midterm election two years ago. Chin is from Waterloo, Iowa and will be voting in her home state.

“I’m voting in Iowa because it’s more of a swing state and because I think my vote will mean more there than it does here,” Chin said. “It went for Trump last time, but the polls have been looking pretty good, not just for Biden, but also the other races.”

Because the event had a registration limit, around 30 students who were not able to get tickets watched Warren speak from behind the retractable tape barriers set up at the edge of Shaw Field.

Many of the students waiting were first-years. Paige Schuller ’24, Anna Keefe ’24 and Claire Knopf ’24, all from Minnesota, stood at the edge of Shaw Field holding Biden/Harris signs. Although the three first-years weren’t able to register in time, they “still wanted to come out and support the Biden/Harris campaign.”

Warren ended her address by urging Macalester students to not just vote, but volunteer and help friends and families vote too, emphasizing the high stakes of the Nov. 3 election.

“Democracy is totally on the line,” Warren said. “We can no longer be an America in which elections are won by voter suppression, by keeping people away from the polls. We’ve got to be an America where every vote gets heard.”