Macalester students among those arrested for protesting Chauvin’s release 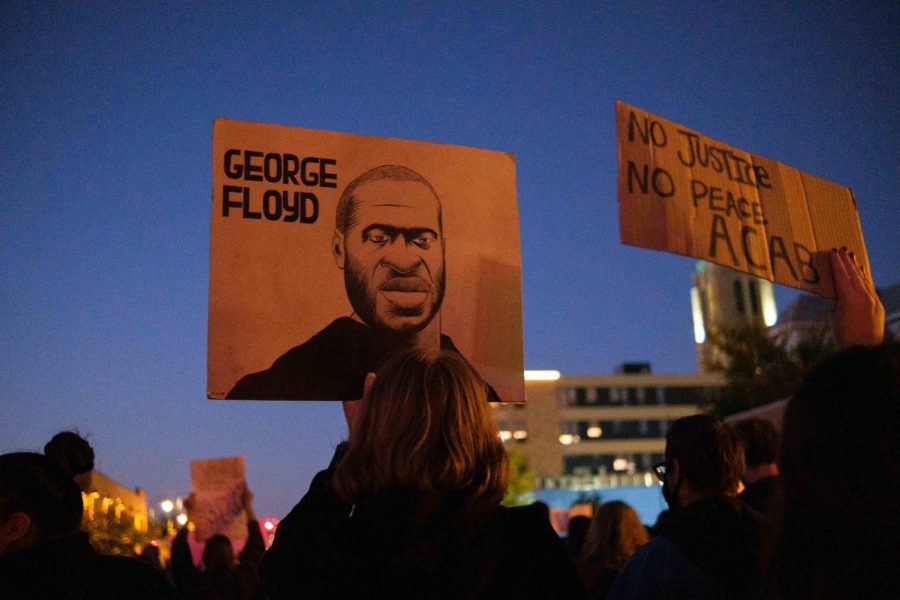 Hundreds march down Chicago Ave into downtown Minneapolis to protest the release of Derek Chauvin earlier in the day on October 7, 2020. Photo by Kori Suzuki '21.

Following Chauvin’s release, Governor Tim Walz activated the Minnesota National Guard on Wednesday afternoon in anticipation of protests. A hundred soldiers were prepared to mobilize to assist local law enforcement, in addition to 100 troopers from the Minnesota State Patrol and 75 conservation officers from the Minnesota Department of Natural Resources.

Around 300 people marched in protest of Chauvin’s release on Wednesday evening in Minneapolis; over 50 were arrested, including at least three Macalester students. Protests began with a vigil at the George Floyd memorial at E 38th St. and Chicago Ave.

The march, which was planned by youth activists, headed north on 38th towards Lake Street and initially planned to circle back and return to the memorial. But some protesters continued on from Lake and Chicago to join with another protest group at the MPD Fifth Precinct. Law enforcement officers on the scene ordered protesters to disperse; MPD reported making arrests just after 11 p.m.

“From their loudspeaker, we hear the announcement, ‘This is the Minnesota State Patrol. You are now all under arrest. Please sit on the pavement,’” wrote one Macalester student protester (who requested to remain anonymous for their safety) in a message to The Mac Weekly.

“I was with a friend,” the student added. “Neither of us are white, we didn’t know what would happen to us.”

The student was able to jump into a van with several other protesters and escape the scene before the police began making arrests. Fifty-one other protesters, however, found themselves surrounded, or “kettled,” by the police on all sides with no way to disperse.

Several Macalester students were among those arrested for unlawful assembly, including Isaiah Agnew ’22 and Andy, who requested his last name remain private. These two students are currently on a leave of absence from Macalester. A third student, who is currently enrolled at Macalester and asked to remain anonymous for their safety, was also arrested. MPD and the National Guard detained the protesters and held them overnight in a jail.

The students described the entire experience as “dehumanizing.”

“I think it was six people in a 10 foot by five foot cell,” Agnew said. “No way to social distance properly, and it was filthy. There was crusty vomit on the walls.”

They were given little food and water during their overnight stay, and were kept together in close quarters with no beds all night. Students also reported that police officers refused to wear masks when protesters asked them to, and made excuses as for why they would not wear them.

“A few of them said that they had had COVID before, so they were okay,” Andy said. “[Another said] that they had the ‘Trump vaccine.’”

The arrested protesters, including the students, were released on Thursday morning. Jail support volunteers from the National Lawyers Guild waited at the jail for all protesters to leave, making sure everyone had food, access to legal advice and a way to get home.

“When I got out, I was broken, “Andy said. “The highest point of the whole thing was coming out and seeing that there were people there to give me support.”

The arrested students are among the 49 protesters facing misdemeanor charges for unlawful assembly. If convicted they may have to pay a $200 fine. Two other protesters are facing felony charges, according to a Minneapolis Police Department press release.

Rivera replied via Twitter on Thursday morning, reiterating that Macalester would reimburse students for fines they receive for civil disobedience; she initially announced this policy in an email to the campus community on June 15.

“Peaceful protest is a time-honored tradition in the US and I fully support our students’ rights to assembly and freedom of expression,” Rivera wrote in her tweet. “Any currently enrolled student who participates in civil disobedience and needs help with bail or a fine can seek reimbursement.”

Rivera confirmed the college’s commitment in her community conversation webinar on Thursday as well, saying that Macalester supports community members’ rights to protest.

“If a student gets in a jam as a result of their participating in protests, they should contact us for assistance,” Rivera said.

Because Agnew and Andy aren’t currently enrolled students, they are not eligible to receive financial support from the college for any of the fees associated with their misdemeanor charges. Instead, they connected with community organizations that are supporting arrested protesters.

The third student is waiting to reach out to the school for financial assistance until they learn what their legal fees will be.

That student is also concerned about having been possibly exposed to COVID-19 during the ordeal, since they were in close quarters indoors with police officers and protesters. They told The Mac Weekly that the Laurie Hamre Center for Health and Wellness denied them an asymptomatic COVID test in accordance with its testing policy.

“I think if [Macalester] can help people that’s great, and I hope they do,” Agnew said.

“But also, I think maybe a more tangible gesture from the president might be donating funds to the organizations that are already on the ground doing this, like the National Lawyers Guild and the Minnesota Freedom Fund.”