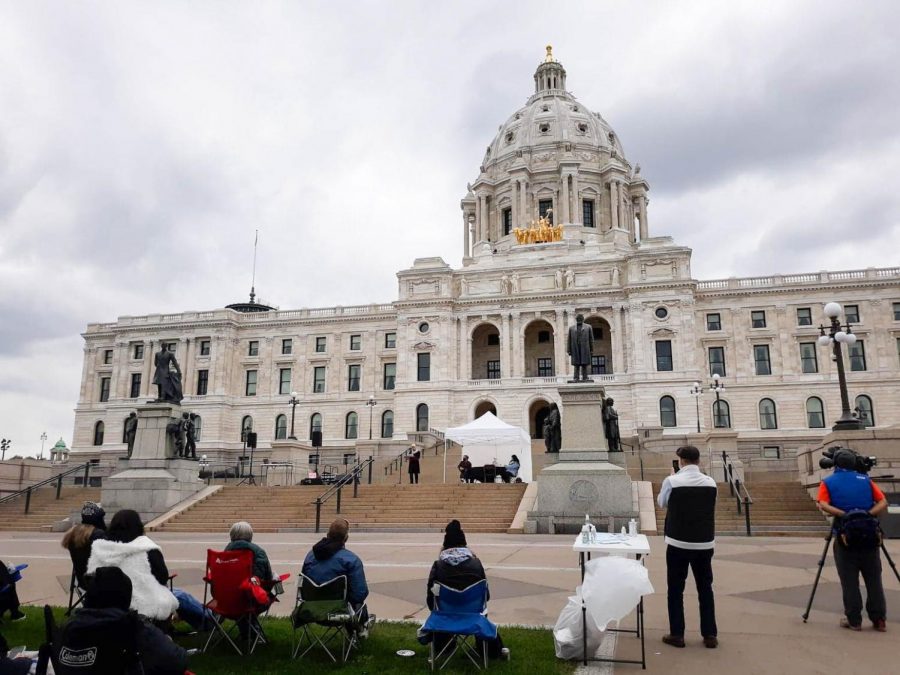 The death of Supreme Court Justice Ruth Bader Ginsburg on Friday, Sept. 18 caused a flurry of mourning, conversation and speculation about where the Supreme Court might go from here — particularly on issues of women’s rights.

On Saturday, Oct. 3, the nonprofit One Minnesota organized a tribute to Ruth Bader Ginsburg at the lawn of the capital in St. Paul. Around a hundred people came to listen to several speakers commemorate Ginsburg’s legacy.

Ginsburg was known as a champion of women’s rights and gender equality. Before former President Bill Clinton appointed her to the Court in 1993, Ginsburg argued six cases before the Court, winning five of them.

Several of the speakers at Saturday’s event — most of whom were women working in law — said they had Ginsburg to thank for making it as far in their careers as they have.

“I wish that I had met Justice Ginsburg,” Hennessy said. “Even though I didn’t get that privilege, she’s changed my life, and she’s changed the lives of many of my colleagues as well.”

In addition to changing the landscape of the American workforce for women, Hennessy said, she was also a personal inspiration for a generation of women, including herself. Hennesy shared her own story about being a woman in law school, where some of the men created an unwelcoming environment for her.

“I think a lot of women have come up against this kind of thing,” Hennesy said. “It made me feel like… I didn’t belong to be there, that there was something wrong with me.”

Watching Ruth Bader Ginsburg’s appointment to the Supreme Court — a position only one other woman had held — was an inspiration for Hennesy.

“I saw as she stood, very small but very mighty, and began her talk about how women deserve to be in the rooms where these decisions were being made,” Hennesy said. “She gave me strength. She was willing to speak truth to power.”

Ginsburg famously faced discrimination as a woman during her early career. She was one of only nine women in her class at Harvard Law School, and although she graduated top of her class, she struggled to find a job at a law firm.

In her mission to expand women’s rights, Ginsburg often found cases with male defendants where she could show that gender discrimination harmed men, too. This, she believed, would get the attention of the male-dominated courts where she presented her cases.

Christina Zauhar-Anderson, a lawyer at Halberg Criminal Defense and member of the board of directors at NARAL Pro-Choice Minnesota, noted that Ginsburg knew how to strategize her fight for gender equality.

“She was a realist, she was a pragmatist and she knew the way to change gender discrimination was piece by piece,” Zauhar-Anderson said. “She played the long game.”

The passing of such a vocal advocate for women’s rights has caused a ripple of concern that if Ginsburg is replaced by a conservative justice, the court might chip away at women’s access to health care, birth control and abortion.

Hennesy highlighted the importance of that access to health care and birth control, talking about the history of women’s access to reproductive rights.

Though Ginsburg’s passing has been marked by an outpouring of mourning and celebration of her life, some have criticised parts of her record. Ginsburg had a mixed record on racial justice, and she joined the Court in limiting Indiginous sovereignty and land rights earlier in her career as a justice (particularly in City of Sherrill v. Oneida Indian Nation of New York and Strate v. A1 contractors).

And in spite of these criticisms, Ginsburg has become a pop culture icon in the last several years. She has been the subject of documentaries, movies, posters, T-shirts and bumper stickers.

She earned the nickname “notorious RBG” for her scathing opinions — her dissent in Shelby County v. Holder in 2013 in particular — but some have criticized that comparison of Ginsburg, a white political figure, to The Notorious B.I.G, a Black rapper, calling it cultural appropriation.

Saturday’s event took place on the steps of the capitol, which has been a site of frequent Black Lives Matter protests over the course of the summer and fall. Recently, protestors marched from the capitol down to I-94, blocking the highway to protest a grand jury’s decision not to indict the police officers who killed Breonna Taylor for murder.

Several event attendees came dressed in Black Lives Matter masks and shirts — but the speakers did not directly mention the protests that have been happening across the country since George Floyd was killed by the police just a few miles away.

Henessy said she knows people doubt the ability for institutions to change, in particular the justice system in the United States.

“There is a distrust in government and in our systems and in our institutions, and it’s understandable,” Henessy said. “My branch of government is struggling to come to terms with its disproportionate impact on people of color and people who live in poverty, and I think people are skeptical and doubt whether we can change systems.

Most speakers ended their speeches with optimism, despite the anxiety over the future of the court. Keynote speaker Ellie Krug, a lawyer, activist and writer, spoke of Ginsburg as an idealist, and suggested that others follow in her footsteps.

“RBG was simply a human,” Krug said. “Because she was a mere human, I want to plant a bug in each of your ears: you, too, are capable of changing the world.”