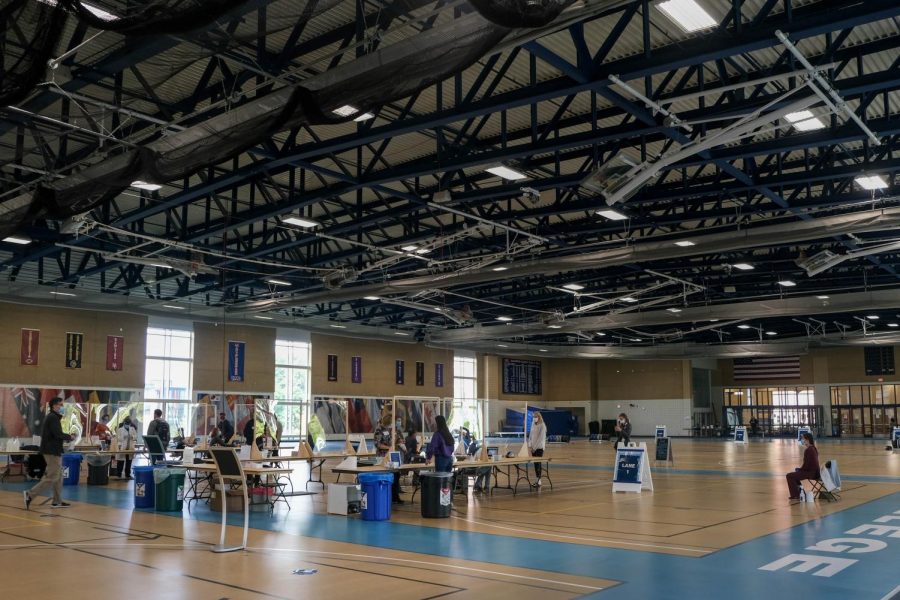 On Sept. 28, President Suzanne Rivera sent out an email containing the plan for module two, including an outline of the surveillance testing plan. On Oct. 5, Director of COVID Operations and Special Advisor to the President Paul Overvoorde sent a second email containing more detailed information.

“The purpose of surveillance testing is to monitor what’s happening community-wide,” Overvoorde said.

“Those infected with the coronavirus are most contagious in the days before they display symptoms and, according to research from the CDC, up to 40 percent of infected individuals do not display symptoms,” he wrote in his Oct. 5 email.

Each week on Monday and Thursday, nearly 300 members of the Macalester community will take a nasal swab COVID-19 test. Individuals will receive their testing dates through an email, which will include a sign-up link and instructions.

“All students, staff, and faculty who spend any time on the Macalester campus during the fall semester are being included in the pool for surveillance. Individuals from this pool will be assigned a day on which they will be expected to participate in testing. Each week ~15% of the community will be tested,” Overvoorde wrote in the Oct. 5 email.

Overvoorde has not finalized the detailed schedule of who will be tested when, but the aim is to share that information with community members as far in advance as possible.

After the test, the community members won’t be asked to quarantine as they were asked to after the first round of asymptomatic testing, but should be especially mindful of social distancing guidelines.

Participation in the asymptomatic tests is mandatory. Overvoorde acknowledged the sacrifices that community members may have to make to be present for their test, like securing child care and reorganizing their schedules, but emphasized the tests’ importance.

“It’s an expectation because it helps to keep our community safer by allowing for detection… and monitoring what the community-wide circulation of the virus looks like,” Overvoorde said.

“The testing landscape is not only moving extremely rapidly but is very broad,” said biology professor Robin Shields-Cutler, one of the five faculty members on the working group. “Part of our role was to be a group that could take account of the different options, and weigh those in the context of what would be an effective measure at Macalester.”

The group considered other options, like wastewater testing, which other schools use, and pooled testing, which involves mixing several samples together in a “batch” or pooled sample, then testing the pooled sample with a diagnostic test. Neither of these alternatives were viable for several reasons, including problems with the physical setup of Macalaster’s facilities and limited lab testing capabilities.

“You may have an idea for what the perfect, most logical, cheapest and best solution is, but part of what we were finding and determining and reporting about is practical considerations, availability and how those things would be implemented in the cluster,” Shields-Cutler said.

Ultimately, the faculty members recommended asymptomatic surveillance testing to Rivera, who decided to implement the protocol.

Vittorio Addona, a statistics professor and member of the working group, wrote in an email to The Mac Weekly that having a solid testing strategy in place would also allow for expanded testing if a COVID-19 outbreak occurred among the community.

“In such a scenario, the groundwork would have already been laid for the logistics of how to carry out the testing,” Addona wrote.

The 300 Macalester community members to be tested each week will be split between two days at specific time windows: Monday between 9:00 a.m. and 11:30 a.m. and Thursday between 10:30 a.m. and 1 p.m. Selected students, faculty and staff will not be entirely random in order to limit how many times each person gets tested and to consistently test students living in each residence hall.

“The idea is to have sort of continuous monitoring over the entire campus as much as possible,” Shuman said. “Someone from your hallway will probably be tested… every testing day.”

Although the short block of time available for sign-ups may be a hurdle to some who are required to be tested, it is designed to provide more prompt results.

“We are making all kinds of sacrifices and adjustments to our schedule. And that is hard, and I see that being hard,” Overvoorde said.

Working group faculty members and Overvoorde agreed that, although the asymptomatic surveillance testing protocol is useful, the emphasis on following COVID-19 behavioral guidelines — wearing a mask, staying six feet apart and washing hands — is as important as ever.

“No amount of asymptomatic testing is going to be a substitute for those things,” Adonna said.