Good Wishes to Everyone: Professor Ruthann Godollei’s “The Wish Machine” in Minneapolis 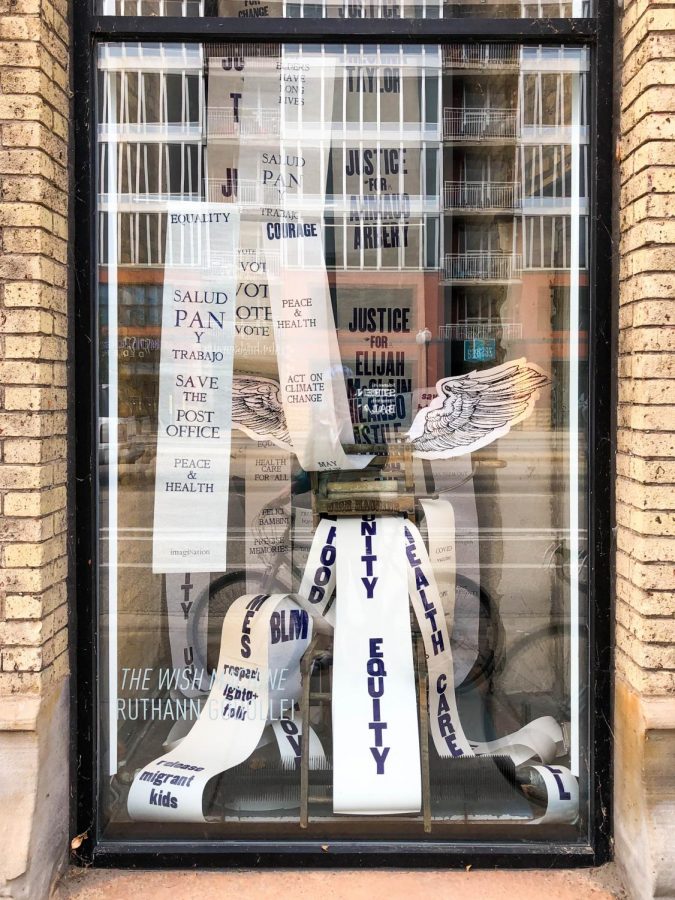 “The Wish Machine” outside Open Book in the MCBA. Photo by Libby Sykes ’22

Ruthann Godollei is Macalester’s printmaking professor and Wallace Professor of Art. She is also a working artist, historian and political activist. Godollei recently created a window installation, titled “The Wish Machine,” at the Minnesota Center for Book Arts (MCBA), which speaks to the current local and national political climate. It is on display through December.

“‘The Wish Machine’ is a communal expression of desires,” Godollei said. “Articulating our desires is the first step to making them happen.”

The work is made from a wooden wringer washing machine with rice paper scrolls hanging from it. These letterpress-printed “wishes” are inspired by various community members’ hopes for the future.

“‘Justice for George Floyd’ is a wish. People have things like, ‘Save the Post Office.’ They want healthcare for all, they want to protect the vote… tons of people want peace, unity, equity,” Godollei said.

“The Wish Machine” covers economic, social and political problems that the world is currently facing. Wishes were collected from a variety of Twin Cities residents.

“I asked people from as many different backgrounds and communities as I had access to, considering there’s a pandemic,” Godollei said. “The bus driver, the custodians both at the [MCBA] and at Macalester, cashiers where I grocery shop, librarians, students and college professors, my neighbors. I tried to not just stick in my comfort zone and to ask perfect strangers.”

Godollei came up with the idea for “The Wish Machine” last semester.

“I just had this idea like, ‘What if we could have a machine for making your own wishes?’” Godollei said. “There’s a little bit of a joke on the washing machine. I thought, ‘wishes should have wings.’ I started this piece actually quite a while back and so you’ll see urgent desires for things like justice for people of color murdered at the hands of police.”

The project then evolved into community outreach.

“[In] this current climate, [there’s] the horrible racism which has been with us so long… the pandemic with it getting denied… and the economic extra burden. People… don’t even feel free to articulate what they might hope for or wish for,” Godollei said.

Godollei emphasizes activism and pointed social commentary in much of her work.

“Hearing from others lends me courage to say when I might want too, and one thing that is coming through loud and clear as people share their wishes with me is the things that need to change,” Godollei said. “I’m happy to put my printing skills in a public space that’s free and open to the public 24/7.”

“The Wish Machine” emphasizes generosity and creative articulation: “I try and lift up something that the community might find helpful to them.”

Godollei has consistently incorporated this community aspect into her career in hands-on learning.

“I’m interested in kinds of art that are open to the public and do not feel classist,” she explained. The good news is printers [artists] today look all around the world… What is interesting, what is human, what is powerful and compelling. So we don’t confine ourselves to only studying.”

The Wish Machine” is an ongoing project. Originally slated to display through October, MCBA extended the work to be on view through December.

“People are still contributing, I can add to it every couple of weeks,” Godollei said.

She still encourages people to reach out to her with their wishes. “I print one for the person to keep!” she said. “Printmaking can be an equitable exchange. You literally get something for participating.”

“Someone could send it from far, far away,” she added. “I am willing to take things in any language. If I don’t have the letters for that language, I can laser-cut a letterpress block.”

The MCBAs’ home building, called Open Book, is scheduled to be a polling place on Nov. 3, so the window display will be covered up during voting hours.

“Because some people’s wishes are political, I’m going to paper it over for the days before and after the election with a big sign that just says ‘Vote,’” Godollei said.

In addition to her printmaking, Godollei continues community outreach with her art car project, which she released as a book with alumnus Eric Dregni ’90, an associate professor of English and Journalism at Concordia University.

“Minnesota’s claim to fame is the world’s only art car parade on ice,” Godollei said.

Her “art cars” are reworked Volvos that came in handy last spring.

“The funny thing as the pandemic lockdown came, is we realized that you could have a parade where you don’t have people lining the streets and just go through a community with a convoy of artists’ vehicles. [It] was a way to bring art to people who were in lockdown,” she said.

“I don’t believe in throwing cars away,” Godollei said. “Rust is never-ending in Minnesota winters. I thought, ‘why not have some fun when I repaint it?’ So I decided to print on my car. It’s hand-stenciled and screen printed, and it’s with machinery and gears and things I find in the road, and then lately, with a bunch of political statements.”

“I like keeping old processes alive,” Godollei continued. “I have respect for what it took to conceive of them. The tangibility is so important. Nothing needs to go to waste. I really love the idea of seeing if you can keep some of the forms of older technology alive and understand how they were conceived and invented. And so, to me, having a car that I maintain myself, or largely maintain myself, is really important.”

Godollei is also teaching Printmaking I at Macalester during module one, using her 2013 book How to Create Your Own Gig Posters, Band T-shirts, Album Covers, & Stickers. She is having her students use cars in the printing process.

“Lucky for me, I’m the author of a do-it-yourself printing book so I worked out the technology of how to print using your car as a printing press. Another alternative process is using a furniture caster. I don’t want to be car centric.”

The students are using linoleum and copper plates to carve, and using water-based ink wherever they live.

“They’re relief printing by hand in the dorms,” Godollei said.

The Printmaking I class has an outdoor exhibit of intaglio and relief prints on view through October 12, by the path between Carnegie Hall and the Janet Wallace Fine Arts Center. Godollei invites all members of the community to view it while they can.