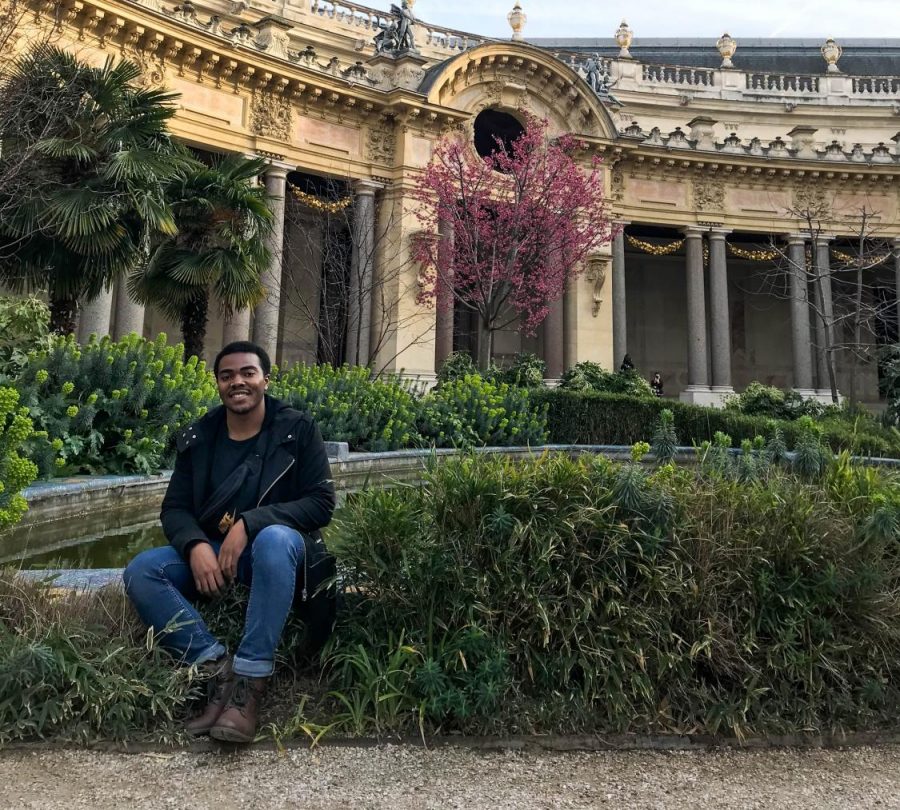 Kai Davis in the courtyard of Petit Palais. Photo by Elinor Jones '21.

Please be advised: this story discusses the passing of Kai Davis. This loss is still new, and it has impacted all of us in different ways. For a list of support resources on and off campus, please visit this page.

Confident, driven and honest, Kai Davis was the type of person people just wanted to be around.

Last week, Davis, a member of the class of 2021, passed away. President Suzanne Rivera announced the loss on Monday, Sept. 21. That day, the college hosted a memorial in his honor. On Friday, it cancelled classes and held a candlelight vigil to remember Davis on the Great Lawn.

Davis was from Illinois, near Chicago. He was a French major with minors in political science and philosophy.

Olive Tambou ’21 met Davis during their spring admissions sampler in 2017, and became close friends with him her first year after talking during a Black Liberation Affairs Committee (BLAC) meeting.

“Some people, you just want to be friends with when you see them,” Tambou said. “He had this presence around him, he walked with purpose. I gravitated towards him because I love that energy.”

It was Davis’s confidence that drew Areana Graddy ’21 to him, too. She met him through Tambou, also during her first year.

“He wasn’t afraid to challenge you,” Graddy said. “I feel like that’s where a big part of our friendship came, because we both kind of have that… He was very high spirited.”

With that confidence came an unfailing honesty. While Tambou said Davis’s absolute assuredness in himself and his beliefs rubbed some people the wrong way, his friends always felt like it was an asset.

“He was very honest,” Graddy said. “If you were going out, you need an honest opinion on your outfit, he’s going to tell you, ‘No… you look a mess.’ Thanks Kai… I’m glad I came up here before I left.”

Davis was also a fierce advocate for his friends.

“I think he was the first person that actually told me, ‘You need to start standing up for yourself,’” Tambou said.

Maya Kachian ’21 was good friends with Davis during their first year. She said that he “refused to wilt for anything.”

Kachian said that Davis used to come into her dorm regularly to catch up, listen to music and talk about whatever came to mind. She remembers feeling really lucky to have Davis as a close friend.

“When you’re a freshman, you’re really confused about who loves you — he was one of those people that didn’t make you question,” Kachian said. “So my favorite memories are the times he would come to my room and I didn’t have to question if he really wanted to be there.”

Davis’ creative energy and curiosity led to all kinds of endeavors — including in the kitchen. During quarantine, he had been trying out new recipes, recreating the Popeyes chicken recipe and making his own fruit candy. Tambou and Graddy said his cooking always turned out delicious.

“He was super adventurous,” Tambou continued. “The man was down to do anything. A couple weeks before school started, he went on a road trip. Somehow he ended up in Wyoming. He was always down to try new things.”

In the classroom, Davis excelled. He was a preceptor for French 306 this semester, and had been a French tutor. In 2018, the French department awarded Davis the Prize for Excellence in French Studies-Level III. Last semester, he studied abroad in Paris through the Center for University Programs Abroad (CUPA).

French professor Juliette Rogers had Davis in her French 306 class his first year, and was blown away by his French speaking skills. She remembers one time he corrected her on the pronunciation of French pop star Maître Gims’ name. Davis told Rogers that Gims was one of his favorite singers.

“I learned a lot from him because he knows a lot about contemporary culture,” Rogers said. “He had never been to France before he went to Paris this year, but he was completely immersed in French culture in his normal, everyday life.”

“The teachers at Ramsey liked him and also the middle school students liked him,” Rogers said. “I don’t think he ever wanted to be a teacher but he was really interested in giving it a try and seeing what immersion education was like.”

“I don’t think I ever spoke to him in English,” she continued. “He and I are both Americans, and we both love French, but he always spoke in French.”

Davis transferred to Vanderbilt University for his sophomore year, but ended up coming back to Macalester for his third year. Macalester students, friends and professors alike were glad to have him back.

“Last year, we had this back-to-school event at the French house, a potluck dinner,”  French professor Juliette Rogers said. “I remember I walked in and I was like ‘Oh my gosh, is that Kai?’ and everybody was all clustered around him and all talking with him. Everyone was so excited to see him back, and also his French was so beautiful, everyone wanted to speak in French with him.”

During his first year, Davis was involved in Pluralism and Unity, a program for first-year students led by the Department of Multicultural Life. Sedric McClure, Asst. Dean of College Access, Retention, and Success, was one of the facilitators. McClure described Davis as a unique leader—a “drum major,” in reference to Dr. Martin Luther King Jr.’s famous sermon “the Drum Major Instinct.”

This semester, Davis was doing an internship at Alliance Française, a French cultural center in Minneapolis. Alliance Française included a tribute to Davis in its most recent newsletter. The internship was virtual, but a few staff members had a chance to meet with him over the summer.

“He wowed us with his French,” Christiana Selander Bouzouina, executive director of Alliance Française, said. “When we met with him back at the end of June, I asked him where in France he grew up, and he said ‘Chicago!’ and I was surprised.”

French professor Andrew Billing was Davis’s first-year course professor and capstone advisor. He remembers Davis telling him he wanted to go back to Paris and teach English at a French school.

Billing said that the French department hopes to put together a memorial for Davis eventually, where everyone could share memories of him.

“We just have this profound sense of loss,” Billing said. “There have been a lot of tears in our department this week.”