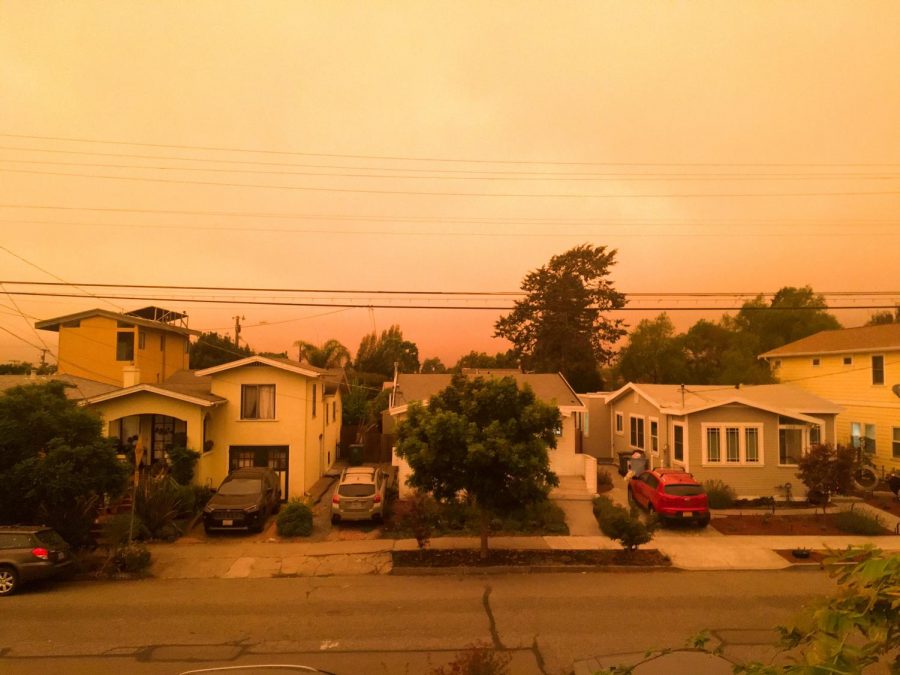 Haze from wildfires on the West Coast. Photo by Niko Bjork '22

As Macalester students have transitioned from their summer schedules back into classes and adjusted to online learning, students whose homes are on the west coast of the U.S. have faced a unique set of challenges.

Fires have raged throughout California, Oregon and Washington since mid-August, when a lightning storm ignited the August Complex fire, which is the largest in California to date. The El Dorado Fire, started in Yucaipa, CA, by a pyrotechnic device at a gender reveal party, and the Santiam Canyon fire in Oregon was started by fallen trees on power lines. When Macalester’s classes started on Sept. 2, students impacted by the fires were forced to deal with the return to school while still worrying about what was happening in their hometowns.

A resident of Santa Cruz, CA, Anna Andreasen ’23 recalled the wildfires rapidly growing in her area soon after receiving the announcement that she was no longer able to return to campus on Aug. 10.

“It was a very intense two weeks,” Andreasen said.

The day after she made the decision to stay home for the semester, the dry lightning storm that sparked the fires occurred and smoke began to spread over the area. Later that week, Andreasen and her family traveled to Albuquerque, NM to avoid the brutal impact the fires were having on their county.

“When I was packing to go, I thought that our house might burn down.” Andreasen said. “It felt like it could go either way to me. I just wanted to get out.”

With the looming threat of the fires nearby, concentrating on schoolwork became more difficult for California students Niko Bjork ’22 and Daryana Spars ’23. Both students were forced to remain inside their homes for several days due to the poor air quality outside, making it much harder to focus on schoolwork and Zoom classes.

“I think everyone felt kind of stir crazy by day three,” Bjork recalled. “It definitely made me miss Minnesota.”

Bjork also emphasized the feeling of dread that has been circulating throughout his community at this time. Thoughts about the future of the West Coast and the influence of climate change on day-to-day life have been weighing heavily on his mind.

As a junior, Bjork is beginning to consider what his life after Macalester will look like. His concerns about the fires have caused him to reconsider whether the Bay Area is the best place to live after graduation.

“I think there was a reassessment of where [my friends and I] want to land post-college,” Bjork said.

For Spars, the importance of classes and schoolwork faded to the background as he took in the destruction happening around him. Virtual classes have already caused some students off-campus to feel disconnected from Macalester, and the fires made schoolwork seem almost trivial in comparison to what was happening.

Spars, Bjork and Andreasen were mainly impacted by the smoke and smog that encompassed the state for around a week. Andreasen recalled ash and burning leaves falling from the sky and said that the entire situation felt extremely “apocalyptic.”

“I woke up, it was like eight, nine in the morning, and it was dark outside, which is just the most jarring thing,” Spars said. “It was really unbelievable.”