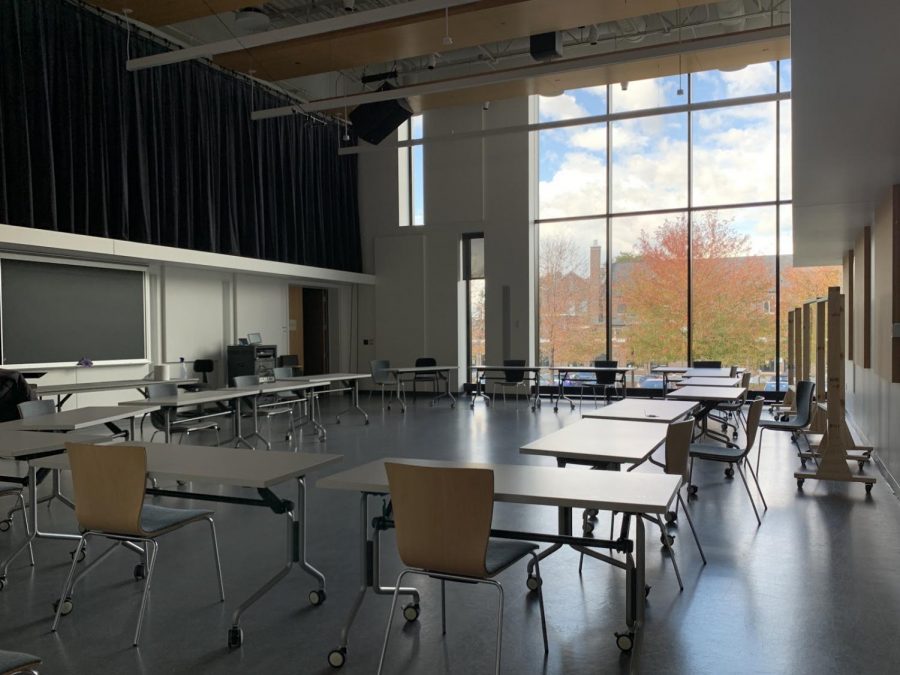 When asked about the future of the Macalester Choirs amidst a pandemic, professor of music and Director of Choral Activities Michael McGaghie has to remind himself that “choral singing is not deadly; it’s the virus that’s deadly.”

When Macalester announced its decision in August to limit who would be allowed on campus for at least the first module, there was uncertainty about how music ensembles would be able to adapt and if they would be able to continue at all. Macalester’s Chorale and Concert Choir will look different this semester, but student singers and McGaghie are determined to keep the choral community alive and make music in whatever way they can.

“There’s a responsibility to create, to create community and to create music, and we’ll see what we can do,” McGaghie said.

While the two choirs are not meeting as often as they normally would, they gather on Zoom once or twice a week to maintain a semblance of community. They go through breathing exercises, abbreviated vocal warmups and talk in breakout rooms.

Separate from Zoom, student singers practice and record their part of pieces by using videos that McGaghie edits to include both the musical score and a video of him conducting. After each individual recording is submitted, McGaghie edits them together.

The two choirs are gradually working up from single-part to four-part harmonic pieces in this format, and in mid-December, McGaghie plans to release a final product of all that the choirs have been able to accomplish in the full semester in lieu of the regular in-person performance.

McGaghie also plans to bring in guest speakers to talk to the combined choirs over Zoom. The first guest will be Dr. Ahmed Anzaldúa, the founder and director of Border CrosSings, a Twin Cities-based choral group that showcases music from Latin American composers and does outreach through educational programs in local schools. Other future guests will include alumni from the Macalester Choirs who have gone on to sing professionally.

What the choirs are doing this semester is similar to what they did in the spring. Due to the pandemic, the Concert Choir was forced to cancel their spring break tour to San Francisco less than a week before they were set to leave. That, along with neither choir being able to perform in their annual spring concert or sing together at all, was devastating for both the singers and McGaghie.

“When you have a class that is all built up to one communal goal, and you spend all this time and energy rehearsing…not having the opportunity to [perform], it stinks,” McGaghie said.

Over the summer, McGaghie reached out to as many returning singers as he could to check in and get a sense of what was most important to them for choir in the fall. He ended up talking to about 50 students across the two choirs, and the most important parts of choir that students brought up were singing and community. Between those two, McGaghie said, “90% of the people I talked to said ‘community’ first.”

On top of preserving community among the returning singers, McGaghie was also faced with the hurdle of navigating auditions for the incoming first-years. In a good year, there can be between 70 and 76 first-years that audition for the choirs. McGaghie was expecting about half of that this year considering the remote circumstances, but he was happily surprised to have over 55 first-years audition for him.

Auditions would normally take place in the choirs’ practice space, Hewitt Hall, with McGaghie at the grand piano. This year, auditions were conducted over Zoom, with McGaghie playing on his clavicle keyboard on one end and then having the students sing on their own, which he said is a much harder task.

“It was definitely weird to be in my room. Hearing the piano over Zoom is a very different experience [than] being in the same room with a piano,” Skye Newhall ’24, a new member of Chorale, said. “It did make it a little more difficult, but other than that, it was pretty much a normal audition.”

Despite the virtual setting, Newhall believes that she will be able to make friends in choir. She is looking forward to learning more challenging pieces and seeing how the songs sound in the composite recordings.

In the future, McGaghie hopes to be able to conduct some outdoor rehearsals in small groups with health guidelines and weather permitting. Even when music ensembles are able to meet again in-person, McGaghie worries about students’ various levels of comfort gathering together again. While there may be students more hesitant to come back, Newhall and Coelho remain excited about the prospect.

“I will definitely be nervous at first to meet people in person just because that’s weird after being on Zoom, but I would much prefer to be in-person with choir anyway, so I would be really excited to meet people and go to those in-person rehearsals,” Newhall said.

“I think I’ll definitely be jumping in the water because I can’t wait to hear people’s voices,” Coelho said. “It’s such a community-builder, and the fact that we’re just on Zoom and looking at our little squares is kind of dehumanizing. I want to be able to hear these people and see them in action, so I think I’ll be really, really excited and want to do it.”

In the meantime, this year has encouraged McGaghie to continue to reflect on the value of choir and the Macalester music community.

“It’s made me even more appreciative for the students, for my colleagues, for the extent to which we are able to gather and for our creativity.”