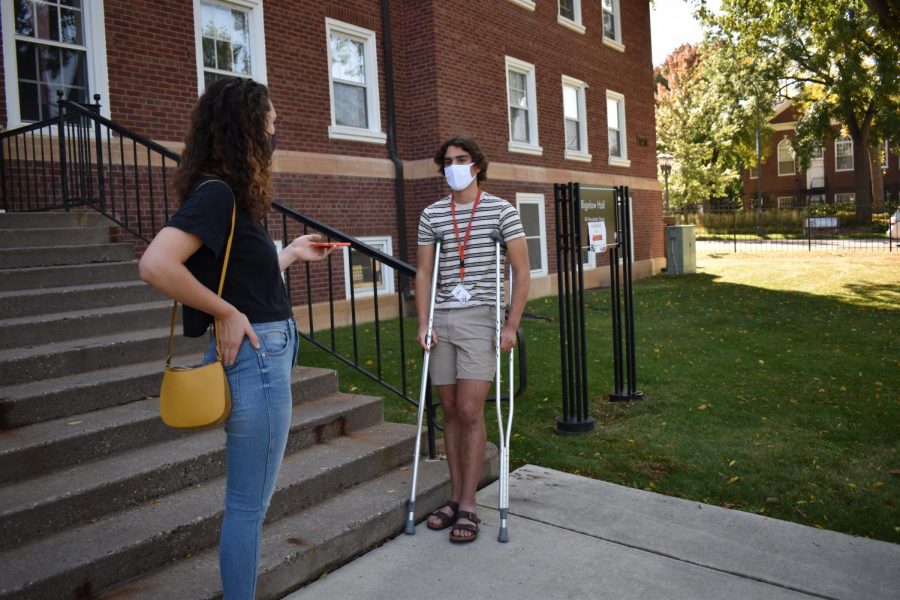 This year, 12 Macalester first-year students are running for five first-year representative positions for the Macalester College Student Government (MCSG). Their experience matriculating to Macalester is unlike anything else in recent memory, with remote classes and social programming preventing them from campaigning as usual. But they each bring their own drives and passions to this competitive race. Seven of them spoke with reporters from The Mac Weekly about who they are, why they’re running and why you should vote for them.

Ahmed worked in student government at his high school, but he hadn’t initially planned on doing the same at Macalester. His first few weeks here have changed his mind. During orientation, Ahmed said, he thought of a few things that he wished were easier for first years; navigating the many different forums and portals, going to Zoom classes from different time zones and accessing mental health resources, for example.

On MCSG, Ahmed hopes to keep working to fix those inconveniences. He wants to pursue his ideas for connecting classmates via Zoom and creating easier systems to connect students with resources on campus.

“Your individualistic concerns… and your problems as an entire class: all of those need to be put forward to the right people for the necessary steps to be taken,” Ahmed said.

Carter Stacy came to Macalester from Santa Barbara, Calif. in search of a close community, a chance to meet new people and the opportunity to take a range of classes.

Stacy participated in student government throughout high school, and he knew coming into college that he wanted to stick with it. At his boarding and day school, Stacy helped decrease student laundry costs and start a shuttle system for student transportation.

High school student government, he said, gave him a chance to make life a little easier for his peers; though he’s still getting a sense of the Macalester student body’s needs, he hopes to keep up that work here.

“Pretty frequently, I would be the lone voice in the room, but I’m not afraid to take unpopular opinions when I know that the student body wants them,” Stacy said. “I care about you and I’m going to try to make your life a little bit easier here.”

Bobbie Pennington hails from Eswatini, Africa. His first time leaving his native continent was to come to Macalester.

Pennington, too, served in his student government in high school. He said that political campaigning in his home country is different there than in the US: in Eswatini, candidates don’t just say what they’d like to do in their position — they show it. This commitment to doing rather than just saying is why Pennington doesn’t have a list of issues or proposals he’d like to work on. He’d rather hear it directly from his constituents.

Eric Yu is an experienced organizer and activist. Since moving from China to Amherst, Mass. about six years ago, he’s been involved with political campaigns, movements for LGBTQ+ and indigenous rights and the climate justice movement.

Recently, he’s focused on climate activism: Yu helped start a Sunrise Movement hub in Amherst and connect it to other hubs in western Massachusetts.

Since he’s always been focused on activism, Yu never ran for student government in high school. At Macalester, though, he hopes to work through MCSG to continue a conversation around climate justice and advocate for students. First and foremost, he hopes to help build a sense of community here.

“What I really care about is to learn about my fellow first year classmates,” Yu said. “I think it’s extremely important for us to form a connection, a sense of community, especially during COVID times.”

Anna Sene is confident in her beliefs: she considers herself committed to justice, inclusion, feminism and the Black Lives Matter movement. But Sene wants to focus her campaign — and her time on MCSG — on the needs of her peers.

Sene came to Macalester from Dakar, Senegal, though she attended the United World College in Norway. There, she said, she developed strong values of inclusion and diversity.

Now, Sene hopes to hold programs where students can feel comfortable coming together to share ideas and suggestions.

“I cannot lead without other people, and being a representative means that I would have to understand and listen to people,” Sene said. “I am coming with a perspective of, ‘it’s not going to be my ideas, it’s going to be our ideas.’”

Mariah Loeffler-Kemp ’24 says she is running for MCSG on a straightforward platform; to make sure all Macalester students feel as welcome as she has these last three weeks.

“For the past three weeks, I’ve felt very welcome and embraced into the community and I want to make sure that every other student feels that way as well,” Loeffler-Kemp said.

She has known about Macalester for quite some time; her older brother is an alumnus, and it was her mother’s top choice school.

“When she was in high school, my mom wanted to come here, but her high school counselor told her ‘People like us don’t go there,’” she said. “Now, my big brother went to Macalester and now I’m coming here, and so it’s really important to my family to see that we now have the opportunity to come here.”

Loeffler-Kemp is campaigning on a platform to stand up for racial justice, strengthen Title IX practices and improve resources for mental health. Most of all, she hopes to “stand up for what the first-years believe in.”

Sami Banat is running to represent the class of 2024. If he wins, he said it won’t be the first time he’s been an advocate for his community.

“I’ve always considered myself an organizer even before I knew what the word ‘organizer’ meant,” Banat said. “I’ve always been driven to serve… and contribute to my community in some way.”

Banat grew up in St. Anthony Park, just a few miles away from Mac. He worked on the campaign to elect Mitra Jalali to the St. Paul City Council to represent Ward 4 in 2018. Banat mentioned that it was with Jalali’s win that St. Paul was able to pass the most sweeping tenant protection ordinance in the country this spring.

“Knowing that I was able to contribute to something better really makes me happy and is something that I want to continue to do here at Mac,” Banat said.

Banat would like to see an expansion of the Minnesota BIPOC scholarship fund as well as Macalester’s outreach into the broader community as well.