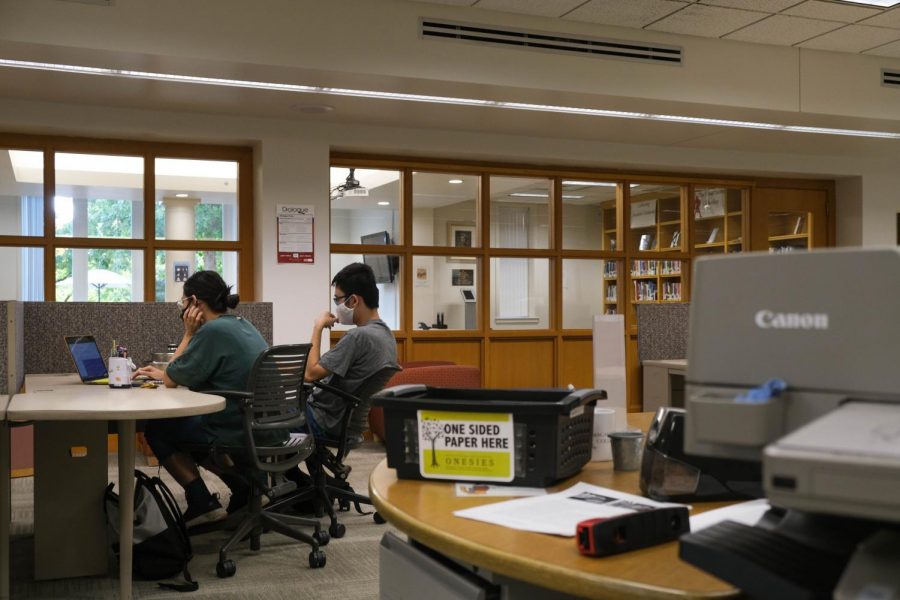 Students work in the library at the end of the quiet period. Photo by Malcolm Cooke '21.

Macalester’s two-week quiet period came to an end on Sept. 17. In the week since, students, faculty and staff have been able to resume some in-person activities for the first time since March, as long as they meet the Mac Stays Safer community commitment.

As of the end of last week, all students, faculty and staff living on or near campus have completed the second round of asymptomatic testing. This included a group of around 50 people who needed to be retested — their samples did not reach the testing lab quickly enough due to a shipping error.

A small group of people also received inconclusive results from their initial COVID test. Special Assistant to the President and Director of COVID Operations Paul Overvoorde said he is aware of five students whose results were inconclusive, and that those students should have received further information about an opportunity to re-do their tests.

However, two students told The Mac Weekly that their tests were inconclusive and that they have not received any further instructions from the college about retesting. Overvoorde said that students in this situation should reach out to him.

Overvoorde said inconclusive results are to be expected in a complex, multi-step testing process. There could be problems with how the sample was submitted, how the barcode was put in or how the reagents were run for that sample.

“It’s actually kind of surprising it doesn’t go wrong more often,” Overvoorde said. “It’s not something that’s a concern, in the sense that it’s a very low number of [inconclusive results].”

The college is considering doing more asymptomatic testing in the future, as well. Overvoorde said this would probably look different than the first rounds of asymptomatic testing; alternatives like testing a smaller sample of students could save valuable time and resources while still serving as an indicator of community spread of the virus.

A small group of faculty members have evaluated various approaches to this and have submitted recommendations to the college. Overvoorde and other administrators and members of the COVID-19 task force will review those recommendations in the coming week.

So far, Overvoorde said, the data suggests that the college is faring well in its fight against COVID spread. As of Tuesday, Sept. 22, three total cases have been reported, all from students living off campus.

“I would have to say that the numbers suggest that the community commitment has worked to minimize the number of cases,” Overvoorde said.

As of Sept. 17, the college opened the door for in-person class, lab and studio meetings for first-year students. President Suzanne Rivera outlined the expectations for these meetings in an email sent to the campus community on Sept. 14.

Although meeting indoors is now an option, Rivera noted in her email that more precautions are always best.

“If you can effectively do something remotely — work, meet, study, work out — you should continue to do it remotely just as you’ve done during the initial weeks of the academic year,” Rivera wrote.

Since first-years are allowed to meet in person for class, some first-year course (FYC) professors have taken advantage of the new tents on the lawn to bring students together. History professor Katrina Phillips held small group meetings for her FYC last week.

“I was really excited to actually get to see my students in person — even though we’re sitting in a giant circle — [and] the opportunity to just have a conversation that flows a little bit more,” Phillips said.

Phillips noted that, as an FYC professor, connecting with students is a little easier for her than it might be for professors with more upperclassmen in their classes. Even so, she had to brainstorm some creative solutions for students who aren’t on campus yet — one student joined her outdoor class via Zoom on her cell phone.

Phillips is still erring on the side of caution with in-person meetings.

“I want to respect not only everybody’s comfort levels, but also the parameters that the administration is putting forward in the hopes that at some point we will all be able to be back in the classroom together,” Phillips said. “That balance is kind of the line I have to walk right now.”

Although the low numbers have paved the way for these new opportunities, Overvoorde said it is essential that the community keeps observing safety guidelines for these opportunities to continue.

“[Reported cases] represent a snapshot in time,” Overvoorde said. “Because they are historical, we know for the past month what the numbers look like, but that provides absolutely no guarantees about what the next month looks like.”